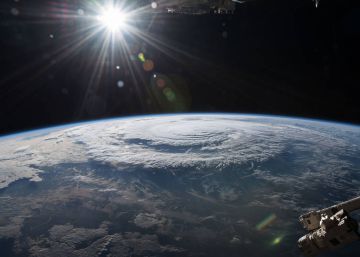 Life on earth it took "little" to appear after the formation of the planet. At least 3.7 billion years ago, and perhaps hundreds of millions of years before, there were already beings able to reproduce in a world where the oceans had just appeared. There was, however, an element that made it possible for those beings to begin to cooperate with each other and eventually the animals appeared, only five hundred million years ago. Oxygen was the fuel that fueled the metabolism of living beings and transformed our planet into an inhabited world, but there are still doubts about how it appeared.

The geological study indicates that until about 2.4 billion years ago there was no oxygen in the Earth's atmosphere or in its oceans. From that moment, in three explosions, the percentage of this gas increased until it occupied 21% of the atmosphere.

Lewis Alcott, a researcher at the University of Leeds (United Kingdom) explains that some studies have tried to answer this question and their results indicate that "the frequency of fires would increase dramatically if atmospheric oxygen increased a small percentage above 21 % current". "That would significantly limit the Earth's biosphere and reduce oxygen production. I think that could explain that the amount of oxygen cannot rise much above the current 21%," Alcott concludes.

One of the most accepted explanations is responsible for the atmospheric overturn of cyanobacteria, microbes that began using the sun's energy to produce carbohydrates and oxygen from water and carbon dioxide. This new technique, which now we know as photosynthesis, gave these organisms an unprecedented success. But better is always worse for some. The beings who had satisfied their energy needs for more than a billion years without oxygen discovered that this new gas was poison to their cells. That was a change of regime and the triumph of cyanobacteria was such that today all the plants on Earth have incorporated them into their organisms in the form of organelles baptized as chloroplasts.

Then, it took almost 2,000 million years until oxygen levels were enough to allow the existence of the first animals and the scientific debate trying to explain this process has been intense. Now, a team of scientists from the University of Leeds (United Kingdom) has developed a model according to which, beyond the appearance of the first photosynthetic microbes and the movement of tectonic plates, two phenomena that began 3,000 million years ago and they had influence on the oxygenation of the Earth, the increase of the essential gas for life in the atmosphere was a matter of time.

Planets with oxygen would be more frequent than previously thought "because improbable biological advances are not necessary," says Alcott

Oxygen is not a rare substance. It is the third most abundant element in the universe, after hydrogen and helium, but it is tremendously "sociable" and can form compounds with almost all the elements of the periodic table. For many millions of years, the interior of the Earth maintained a high temperature reached during its formation, but the progressive cooling reduced the amount of volcanic gases that arose from its interior. These gases were what, when reacting with oxygen, removed it from the atmosphere. This change in balance allowed the oxygen produced by the cyanobacteria to start generating a surplus that accumulated. The new model would explain the intriguing interval between the appearance of oxygen-producing organisms and the increase of this gas in the atmosphere.

Later, these changes in atmospheric balance affected the amount of phosphorus in the sea, which depends on oxygen levels, and that had an impact on animals that lived on photosynthesis, which in turn used phosphorus. When these feedback processes produced a third increase in the percentage of oxygen in the atmosphere, the Earth was ready for the explosion of complex, mobile and visible life forms that have inhabited the planet since then.

Lewis Alcott, first author of the article that is published in the magazine Science, states that, in addition to knowing these essential processes for the appearance of life on Earth, his model suggests that planets with atmospheres of abundant oxygen can occur more frequently than previously thought, “because (for their appearance ) no multiple and highly unlikely biological advances or casual tectonic events are necessary. ”

Neither wave nor particle: history of a duality