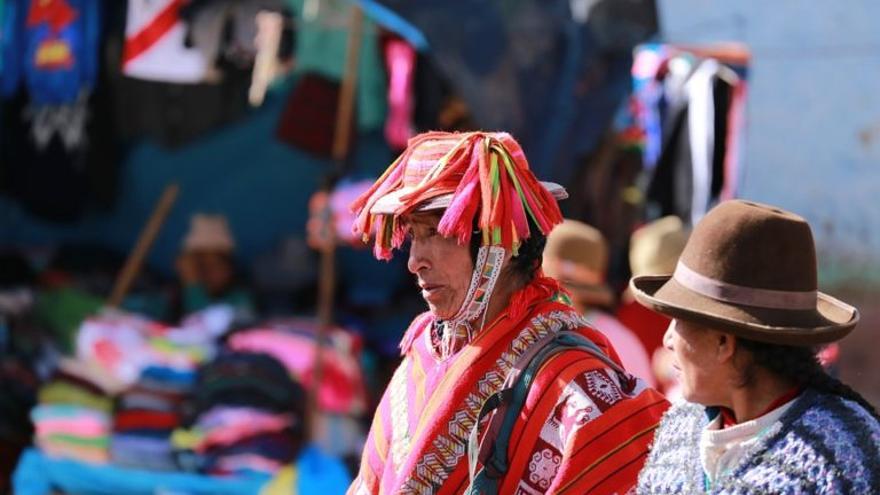 The dominant idea of ​​”progress” has led us to a really critical picture of the environment that sustains us. The climatic consequences that this has caused are becoming much more evident and regrettable. Meanwhile, the large corporations, together with the nation-states, decide the destinations to continue thinking only about the maintenance of their status quo.

In recent times, the indigenous issue has gained a small space within the public debate, especially due to its relationship with climate change. There are those who have defined indigenous peoples as “the great forgotten ones” of the fight against the climate crisis: without a doubt, they not only continue to be the great forgotten of the fight against climate change, but they also continue to be marginalized and discriminated against in terms of to the realization of your rights.

Since always in a condition of exclusion, indigenous peoples have a lower life expectancy than the non-indigenous population; the probability that they live in a condition of extreme poverty is higher; they have little access to basic services and their rights over the territories they inhabit are continually sacrificed on the altar of capital and neo-colonization. This shows the null management of the governments responsible for their participation in collective life. It is not surprising, therefore, that it is only recently (and still to a small extent) that indigenous peoples have begun to be heard in the debate on climate change, despite the fact that, occupying only a quarter of the earth’s surface, they protect up to 80 % of biodiversity.

These peoples have historically shown that, within the diversity existing in the more than 5,000 cultures that populate our planet, they have a great common denominator: respect for the environment. And it is that for indigenous peoples the natural environment is considered a source of life, rather than a natural resource. This is a fundamental premise when it comes to consolidating and preserving its own governance systems. Existing legal protection figures, such as the “Special Indigenous Jurisdiction“, They are important references of organization from the local and traditional, where a management proposal built within the communities themselves is proposed. The protection of nature is an inherent demand in the claims made by indigenous peoples through the recognition of their rights, which are intrinsically linked to the territory where they live, to the territory they protect and preserve.

In the last 30 years, the situation of the indigenous peoples of Latin America has represented a relevant phenomenon, since, through their struggles and resistance, they pressed to be taken into account within the normative systems of their countries. However, in the international arena, instruments of legal protection have been evolving through the signing of international conventions, such as No. 169 of the International Labor Organization on Indigenous Peoples (ILO), in 1989, and the United Nations Declaration on Indigenous Peoples. Rights of Indigenous Peoples, in 2007, among others. However, despite this regulatory framework, there is no support through intercultural public policies that enforce compliance with and materialize the right. Therefore, their demands remain in force, and indigenous law remains a pending issue today.

The pandemic has appeared in a complex scenario and has demonstrated the imperative need to reconfigure many of the things that we thought were stable and immutable. In the case of indigenous peoples, no effective actions have been implemented to manage the situation, nor have special protocols been used from their own traditional and cultural approaches. The existing social gaps have increased; Extractivism activities have also been intensified through mega-mining projects such as the Arco Minero del Orinoco (AMO), reported to the UN, whose cultural and environmental damages are incalculable and irreparable for the Amazon. These activities at different scales have proliferated without any type of control, consummating a ruthless project of dispossession and devastation.

This situation is not a loose link, distant and relative only to the thickets of the Amazon rainforest and its inhabitants. The price of gold, considered a safe haven in the face of the prevailing uncertainty in economies on a global scale, has exceeded historical levels during the months of confinement: international demand for gold is one of the fundamental components for the perpetuation of extractivism as a support for a cumulative system.

Archetypes was born precisely with the objective of improving the quality of life of indigenous peoples, valuing them as an indispensable reference in the fight against climate change, local economic development and the preservation of the natural environment and ancestral wisdom as the collective heritage of the planet . We want to make visible the important role they play as a non-state actor in a globalized world, in vital issues such as the environment and local self-development. Our activity is based on the recognition of the principle of self-determination of indigenous peoples and the close link that exists between them and their territories, based on an identity, cultural and worldview foundation. Taking actions that help to recognize and materialize indigenous rights is a good way to incorporate truly sustainable approaches and guarantee the conservation and care of the planet.

Our proposal is to provide support and accompaniment to indigenous communities by publicizing instances such as the Special Indigenous Jurisdiction, a legal mechanism around which the management, control and administration of justice in the communities is structured, thus guaranteeing the defense and protection of the territory. This is a formally recognized figure in several Latin American states and, however, efficient measures have not been articulated so that this legal device can be put into practice correctly.

In order to advocate for an effective application of the Special Indigenous Jurisdiction, we will provide technical advice in the community and help build and publish a community planning instrument called “Life plan“. The information to prepare it will be obtained through workshops and work tables and will serve to consolidate a strategy to defend the rights of the indigenous population before local, national and international legislation (political objective). At the same time, it will serve to develop a resource management tactic (economic objective) and promote actions that contribute to mitigating climate change (environmental objective).

Last but not least, we will incorporate the use of a geolocation tool that will make it possible to identify resources, needs, governance models, potentialities and modes of community management. In good synthesis, it will be the digital translation of the Life Plan. The geolocation tool applied to indigenous communities constitutes an innovative approach that seeks to strengthen the traditional indigenous organization from horizontality, favoring the self-development and political action of the communities themselves “from below.”

The field activities will be framed in a research work that will analyze the coherence in the application of public policies in indigenous territories. The ultimate aim of this work will be to provide inputs to offer an alternative to traditional international cooperation, which often has a welfare approach. With this project we want to offer a new approach, based on total respect for the community and its conception of development, which supports, makes visible and accompanies, instead of imposing.

We are on the premises to carry out our pilot project that will be carried out in Venezuela, in the territory of the Huottoja People, located in the state of Amazonas, which will have the participation of important specialists in the area, such as Professor Vladimir Aguilar Castro, who be part of our work team. We consider a strength the close link we have with the community where we are going to launch our first project. All of our work has been validated by community leaders, and many efforts have been made to achieve an effective work plan while respecting the autonomy of the community.

At Arquetipos we believe that it is possible to offer a new way of doing cooperation. We are convinced that a situation of such dimension, such as climate imbalance on a global scale, and the consent of a model that is based on extractivism, calls for the design of new ways of understanding development and progress. How timely and how necessary today is the resistance of the great forgotten, who do not forget that it is the human species that depends on nature to live, and not the other way around.