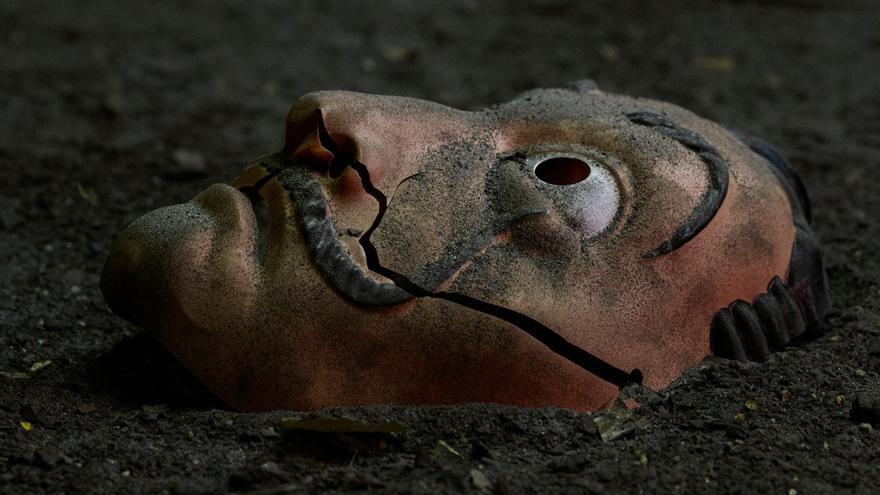 You don’t have to be an expert in series from television to know that ‘The Money Heist‘ it is a worldwide phenomenon. It was enough to move around the world, either through the Philippines or Cyprus, to find the emblematic dali mask and the typical t-shirt as another souvenir. Or that the Hispanic tourist, instead of asking for Messi or Cristiano Ronaldo (when they were still a national asset), they would tell him about the fiction of the charismatic robbers. To the point that more than one would confess that that chattering Spaniard had learned it by following his wanderings.

You don’t have to be an expert, no; but the connoisseurs corroborate the success. And even the scarce data that is available do, given the secrecy that Netflix has when it comes to revealing the numbers of its productions. In the ‘ranking’ of the most popular series by hours seen in its first 28 days on the platform, ‘La casa de papel’ appears (specifically, its fourth season) no less than at number three, only surpassed by ‘The Squid Game‘and’ The Bridgertons’, above such emblematic titles as ‘Stranger things’. In addition, two other installments of Spanish fiction (season 3 and the first part of the fifth season) also appear in 12th and 14th place, respectively, on the same list.

According to Parrot Analytics, the launch of the beginning of the end, on September 3, became the most demanded thing in the world … and that the audience already knew that the fate of The Professor, Tokyo and company would not be sentenced until this December 3, when the last five episodes that will put an end to the spectacular robbery in the Bank of Spain in which the band is now involved.

But what is it that has hooked millions of fans across the planet to a series starring, a priori, by the bad guys of the show, by the friends of others? What have you seen in this fiction ‘made in Spain’ that has connected with such a heterogeneous audience? Here we analyze five points that made it take off the phenomenon on a global scale.

The creators and directors, a safe bet

Maybe before ‘La casa de papel’ the name of Alex Pina, its creator, it will not sound too much to them. But surely they had seen many of the series that he had developed, taking into account that they were subscribed to the first positions of the ‘rankings’ of audience Spanish people: ‘Paco’s men’, ‘The boat’, ‘Vis a vis’, ‘Los Serrano’, ‘Journalists’… So for Antena 3, trusting in the new project of a creator attached to success was practically a safe bet, especially considering that the series would address a robbery for the first time in a Spanish television fiction, a genre that had worked very well. good at the movies. Pina surrounded herself with her usual equipment, with Jesus Colmenar as director; Migue Amoedo as cinematographer, and Esther Martinez Lobato, his wife, as an executive producer and screenwriter. Another talented ‘band’.

Netflix, a market of 191 countries

‘La casa de papel’ premiered in May 2017 in Antenna 3. Although the audience was good in the first season, it was going down in the second, so the chain decided to shelve it. The actors and creators thought that their joint story would end from there. But the entrance on the scene of Netflix it changed everything. The platform added it to its catalog at the end of 2017 without any fanfare, like yet another of the Spanish productions that it added to its offer …

The surprise was that the interest in the band of robbers commanded by The teacher it began to skyrocket, especially internationally, as it premiered in 191 countries at the same time. It was the first stone on the way to the global phenomenon. In 2018, Netflix It had already announced that fiction had become the platform’s most watched non-English-speaking series in its entire history, so its next chapter was sung: it would produce more seasons. Dalí’s masks were popularized in demonstrations in countries around the world, as a sign of the discontent against the established system that they reflected so well on screen Tokyo, Denver and the rest of his team. The phenomenon had just begun.

The perfect mix of action and emotion

‘La casa de papel’ is an action series. It is obvious. The Rhythm of ‘thriller‘, which leaves the viewer almost breathless, with a narrative technique based on compressing time (many things happen in a few minutes) is one of its great assets. It is hard to remember such fast-paced fiction on a generalist television (its first two seasons were broadcast by Antena 3) and, as Jesús Colmenar says, with it the tonic of the ‘prime time’ fiction of the Spanish channels was broken by changing “Mrs. de Cuenca ”by some robbers with the name of the city.

But it does not stop there. The emotional part -which totally permeates this final part of the last season-, either in the form of flashbacks of the past of the members of the band or of the affective relationships that they establish between them in that 24/7 coexistence that are the robberies, has great importance, and placed between scenes of a lot of action, even of great violence, it serves to quell the fire of adrenaline with the humidity of some tear. That humor of the black comedy, which appears in the most unlikely situations, the result of unpredictable (and excellent) scripts, is another of the components that serves to reduce tension.

A symbol of resistance

That some fictional characters who operate outside the law arouse the sympathy of the viewer is not something new. The sophisticated white glove robberies that show movies and series of all time have always put him next to ‘the bad guys’. Success in the operation is celebrated. But here that empathy for the offender becomes something more. In one move. The resistance movement. Because those thieves steal from the really bad guys: the Fábrica de la Moneda y Timbre and the Banco de España. And they end up becoming anti-system.

They even have their anthem, which is repeated throughout the seasons: the catchy ‘Bella Ciao’, song that the partisans chanted in their fight against the fascists during the Second World War, which has represented the ideals of freedom in the 20th century (and which was the equivalent of ‘Resistiré’ in confinement in Italy and Germany). The Professor’s grandfather (Álvaro Morte) taught it to him and he passed it on to his ‘pupils’. Versioned by artists such as Yves Montand and Manu Chao, the series has its own in the voices of Manu Pilas and Nawja Nimri (Inspector Sierra). The protesters who appear in the series waving banners in favor of the robbers outside the building where they remain sheltered in some way represent us.

An aesthetic that is already a brand

The creators wanted to give a visual identity that would give mark to the series and the red monkey (who has copied ‘The Squid Game) and Dalí’s mask (an unpublished version of the revolutionary’ V for Vendetta ‘) that the robbers wear (and they place the hostages, to play the distraction before the police) has accomplished. That ‘work uniform’ is already part of the carnivals in various parts of the planet. But that’s only the most visible part. The sets and props they are also impeccable. On the set where ‘Vis a vis’ was filmed, the Mint house With every little detail. And in the final season, a room of the Bank of Spain which faithfully reproduces the original, with his paintings by Goya painted by hand (no plates) and coffered instead of ‘pladur’. A 181-day job that is blown up in the first explosion. But the preciousness that the series demands justifies everything.

The aesthetics in the ‘flashbacks’ starring the late Berlin (Pedro Alonso) as manipulative as it is cultured and epicurean, delicious little gems that appear amidst barbarism and that have led to a ‘spin-off’ (which will arrive in 2023, with Berlin as the common thread) that will survive the series. How the Korean version will do it, with the actor from ‘The Squid Game’ Park hae-soo, which will be released in 2022. The phenomenon is unstoppable.