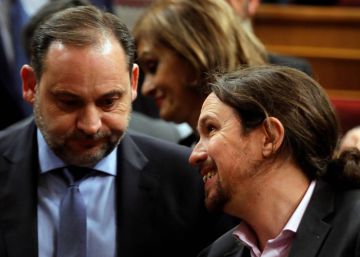 A cap on rental prices in what are known as stressed areas and, in addition, a mechanism for tenants to claim from landlords the reimbursement of “amounts received in excess with accrual of legal interest increased by three points” in the event that they have exceeded the limits set by law. It is one of the proposals that Unidos Podemos will transfer to the PSOE in the framework of the negotiations to carry out the future state housing law, according to a proposal of the dwelling formation to which this newspaper has had access and which also includes the creation of an official register of contracts.

In the document, Unidos Podemos proposes a regime of income containment in stressed urban areas that would allow the autonomous communities to establish an index that would limit the maximum prices based on a series of assumptions, one of the measures that the minority partner of the Government demands since the talks began within the Executive to draft the future rule.

This limitation of the rents is the one that would give rise to the tenants who had to pay more than the allowed limit to be able to demand from the landlords “the restitution of the amounts received in excess”, with accrual of interest and “without prejudice to the responsibility in which they may incur in application of the sanctioning regime established by the corresponding autonomous community “, details the text. In other words: the owner should return the extra rent and pay additional interest to the tenant, and may also be penalized by the regional administration in question.

When setting the maximum limits for rental contracts in a stressed area, Unidos Podemos proposes that the official reference index be taken into consideration, which will be set according to the income of the rental contracts of habitual residence in the declared area of stressed market. Thus, in these cases, “the rent agreed at the beginning of the contract may not exceed the official rate for renting a home with similar characteristics in the same urban environment.”

The final price may be modulated upwards by weighing specific circumstances such as the accessibility of the property or the quality of the house. The proposal includes, among other points, the “state of conservation and maintenance of the house, its age, height, accessibility or not by elevator, energy efficiency, proximity of access to transport and public services, inclusion or not of furniture, communal areas of shared use and available family income in the area “, although the door is left open to include other conditions that the department of the autonomous community competent in housing matters considers as” relevant “.

However, the proposal emphasizes “in no case may the price of the reference index be increased by more than 2.5%”, and provided that the price is modulated, the reasons for these changes must be included in the contract.

The landlord could also raise the price in contracts subject to rent containment if it has carried out improvement works, although this increase will always have to be subject to the terms provided by urban leasing legislation. For the purposes of this law, the proposal emphasizes, “those that are necessary for the maintenance and conservation of the property, as well as those that are required for the operation, repair or security of the property, will not be considered as improvement works”. the elements that comprise it. “In the notification of the rent increase, the expenses that are considered improvement works must be detailed.”

The United We can proposal also includes the assumption that the same home could be the subject of various lease contracts of simultaneous validity that affect specific parts of the property. In this case, the sum of the agreed rents “may not exceed the maximum rent applicable to the unit rental of the dwelling”. For this, each of the documents must state the amount of the other contracts signed, “thus proving that the total sum does not exceed the maximum applicable rent.”

Unidos Podemos proposes to create a Registry of Rental Contracts (RCA), of an administrative, declarative and electronic nature, with free access after accreditation of legitimate interest in the consultation. This platform would serve to register the contracts and know the statistical data regarding the price and other details of the market.

All the lease and sublease contracts should be registered in this file, as well as the details of their novations and subrogations and all the parts that make up the document, such as the leased property and the full postal address, the year of construction of the property, the square meters, the number of rooms, the identification number of the habitability certificate, the cadastral reference number and the energy efficiency certificate. It should also be reflected if the building has an elevator or not, if it has heating and cooling systems, if it is furnished or not and the state of conservation of the house.

Among more details, it would also be stated if the property belongs to a Socimi and if the house is intended for first residence or other use, the monthly rent and if the rent includes individual consumption services, the deposit or guarantee and the information on final judgments and arbitration awards for non-payment of rents when it is a primary residence.

The data contained in the RCA may be used by the Tax Agency, as well as the Judiciary and other public bodies to achieve their respective purposes. The registry may also be used for the purpose of administrative quantification of the “income mirror” and, in general, it may be exploited for statistical purposes determined by regulation. However, tenants and landlords could only enjoy the tax benefits and aid that are stipulated for this purpose, provided that the lease is registered in the RCA.