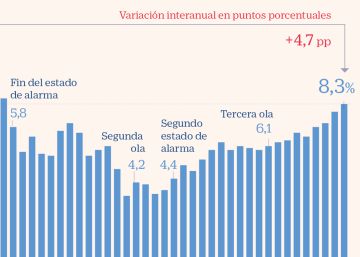 May 9 is getting closer and closer, a date on which the current state of alarm and the protection measures for vulnerable tenants derived from this figure will foreseeably end. From then on, once the traditional regulatory framework is restored, the large landlords in Spain foresee that the procedures will begin to carry out between 30,000 and 40,000 evictions due to non-payment of rent, a figure made up of both the cases that have been dragging during the last months as well as due to the projections of delinquency that the experts handle within 40 days. The launches in homes of small holders would also enter this amount.

Large landowners, broadly speaking, number between 350,000 and 400,000 families that today are in a situation of vulnerability throughout the country, a range that, they warn, could increase slightly in the coming weeks. In turn, they expect a delinquency rate that by May 9 would average around 10%, although some employers raise it to 12% or even above 15% due to the slow recovery, the delays in the campaign of vaccination, restrictions on mobility to prevent the spread of the virus and the limbo of ERTE, to which some 900,000 people are still subject.

The result shows up to 60,000 unprotected households that could not cope with the payment of rents. Of these, no less than 30,000 would end up in eviction according to the calculations of the companies consulted, which recall that “the bulk will depend on small homeowners” (up to a maximum of 10 properties), who are those that “make up the majority From the market”.

All these homes are today under the umbrella of measures for the protection of the vulnerable tenant that the Government decreed at the beginning of the crisis and that has been extending, with the inclusion of mortgage and rent moratoriums, an ICO line for the payment of rent, the automatic extension of contracts and the suspension of evictions of the most fragile families.

Sources in the real estate sector remind that not all cases of defaults lead to a launch, since alternative routes such as affordable rent or the granting of loans can be opened. These sources, however, doubt the effect that loans can have, and point out the “little impact” of measures such as the ICO lines launched by the Government to help tenants in distress, of up to 900 euros per month for a maximum of six and with zero interest. Thus, to avoid greater bleeding, they rely more on negotiations between landlords and tenants or on formulas such as affordable rent.

Default rates that exceed 10% by the end of the state of alarm are not negligible according to the data in the File of Delinquent Tenants. The registry recorded in the middle of this month of March – latest available data – a non-payment rate of 8.3%, although from the file they emphasize that the percentage includes all incidents, from total delinquency to specific delays in the payment of the rents. In any case, the rate has not stopped growing since the beginning of 2021, already exceeds the incidence of the first weeks under the state of alarm of March 14, 2020 and is dangerously close to the maximum of 12.2% registered at the beginning of last May, at the worst time of the pandemic.

The eviction figures predicted by the experts consulted would surpass the numbers registered annually in the years prior to the Covid-19 health and economic crisis. According to data from the General Council of the Judiciary (CGPJ), between 2017 and 2019 there were some 35,000 launches due to non-payment of rent per year, a number that plummeted to 20,000 during the Covid year. Between October and December 2020, however, pre-pandemic figures for the fourth quarter of the year began to recover, with some 8,000 launches.

What happens with the evictions as of May 9 will also depend on the future of the future state housing law, almost stalled today due to the strong divergences between PSOE and United Podemos due to issues such as the limitation of the price of rents. and tax incentives for homeowners, the obligations that large holders must be subject to, or policies around empty houses.

Curiously, the government partners have made progress with regard to evictions. At the beginning of the month, the two formations reached an agreement in principle to postpone the launches of vulnerable families for up to three months, if so accredited by social services, to give the autonomous communities time to look for an alternative, which would always have to be an alternative. home and never a hostel or hostel.

Although there is still more than a month left until the end of the state of alarm, the continuous delays with the housing law threaten to continue postponing a regulation that, according to the initial calendar, should have reached the Council of Ministers in February. After several delays, the members of the Executive set the estimated date of Easter, but everything indicates that there will be further delays.