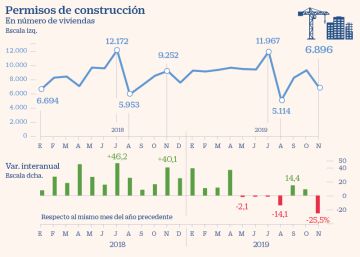 The construction sector experienced a year of euphoria in 2018, but the good data has been progressively deflating as 2019 progressed, to the point of closing in a negative trend, given the inability to repeat for the second consecutive year exceptional figures achieved one year before, the best since the recovery of the sector began in 2015. An evolution that seems to accompany the slowdown of the Spanish economy, but above all, the depletion of the real estate bull cycle, which has made prices rebound strongly and in a very short time , and subtracted capacity to buy housing.

In 2019, the residential investment practically It’s stalled, while the contribution to the GDP of the construction sector was reduced by half compared to 2018. New construction projects have fallen strongly for several months and, in the absence of the year-end data, it seems that they will barely pick up 5% compared to 2018, compared to increases of more than 25% in the last three years. Jobs in the sector also suffered and closed the year with falls.

All this in a context of marked slowdown, in which the economy has grown from 2.6% in 2018 to 2% in 2019, and in which home sales have fallen 3.6% in the accumulated until November, after four consecutive years of strong price increases that have eroded the ability to place product and run out of cycle very quickly.

According to the National Accounting data published recently by the National Statistics Institute (INE), investment in housing in Spain was halted in 2019, as it barely rose 0.8%, after a sharp increase of 6.6% registered in 2018. The last quarter ended up in red numbers, with a drop in investment in the residential sector of 3.5% compared to the same period of the previous year. The decrease in investment deepened as 2019 progressed: it stopped growing in the second quarter compared to the previous one, decreased in the third (-0.3%) and contracted further in the fourth (-3.5%).

This has also caused the contribution of construction to GDP to be reduced by almost half, from 5.7% of 2018 to 2.9% registered in 2019, according to National Accounting data. Although in the first quarter of 2019 this branch of activity grew to 6%, its vigor was progressively reduced throughout the year until it contracted by 0.7% in the last quarter.

The moderation that the sector is going through is also evident in the number of new housing projects. Recent data from the Ministry of Transport, Mobility and Urban Agenda show that New construction visas plummeted 25.5% in November compared to the same month 2018, the largest decline in five years, and the fifth non-consecutive month of year-on-year falls in 2019.

In the absence of the year-end data, everything seems to indicate that in 2019 they will have started about 105,000 houses, far from the 150,000 that the promoters estimated as a figure of “cruising speed” and some distance also from the forecasts made by Servihabitat at the end of the year, which expected to reach 125,000. The number of projects would thus remain very close to those registered in 2018 (100,733), which would mean an annual increase of less than 5%, compared to the strong rebounds close to 25% between 2016 and 2018, although it is true that in those cases were based on much lower absolute figures.

The contradiction of the building has also made a dent in the workforce. This is shown by the data from the Active Population Survey (EPA), which reveals that in the last quarter of 2019 construction – excluding civil engineering – gave employment to 1,174 million employed, 0.4% less than the same period of 2018.