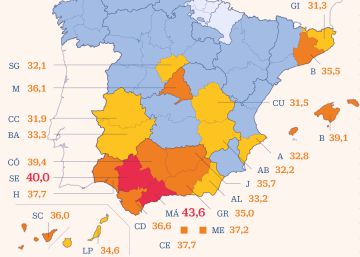 The average rental price would have to be lowered in 20 Spanish provinces if it were to prosper the proposal that United We Can, seven other parliamentary forces and the large unions have transferred to the PSOE to limit the maximum cost of renting a flat to 30% of the average income of each area. It is the conclusion that is drawn from the crossing of the average salaries offered by the Tax Agency with the data of the rental price index prepared by the Ministry of Transport, Mobility and Urban Agenda, both relating to the year 2018. To this twenty regions, According to an analysis that does not include the Basque Country and Navarra because they have their own tax regimes, Ceuta and Melilla should be added.

The proposal, initially presented by the Workers’ Commissions, the UGT, the CGT, the tenant union, Facua and the PAH – along with almost a hundred organizations – in full negotiations to carry out the State Housing Law, joined last week the Minority partner of the Government together with ERC, BNG, Más País-Compromís, Junts, Nueva Canarias, Bildu and the CUP, a large part of the investiture block. Among other measures, they ask that rental income be lowered “at prices adjusted to the median household income, and prevent increases that involve dedicating more than 30% of earned income to rent.”

With this cap, and always according to official data, prices would have to be cheaper in Malaga, where a person has to allocate 43.5% of their income to rent an average flat alone, in Seville (40%) and in Córdoba (39.4%), the three provinces with the greatest imbalances. Others are the Balearic Islands (39%), Huelva (37.7%), Cádiz (36%), Madrid and Santa Cruz de Tenerife (both with an effort of 36%) and Jaén, Barcelona and Granada, where he dedicates around 35% of income to pay for housing.

The crossing of data shows that despite the fact that the highest prices are concentrated in Madrid and some neighboring municipalities, in Barcelona and its metropolitan area, and in areas of the Balearic Islands and the Canary Islands, the greatest efforts are made in several Andalusian provinces, given that Although rental costs are in the upper half of the table, salaries are the second lowest in the country, only ahead of Extremadura.

Something similar happens in the Extremadura region. In average terms, with 350 euros per month per rent, it is by far the cheapest autonomy to rent, but its low wages mean that the residential effort is above areas such as the Valencian Community, Murcia or Aragón, where rental prices are higher.

The lowest salary pressure when renting an average apartment alone is found, for their part, in Castellón and Lugo (23% and 24%, respectively), in León, A Coruña and Lleida (around 25% in all three cases), and in Asturias, Palencia, Teruel, Ciudad Real and Ávila, where approximately 26% of income has to be dedicated to housing.

Analyzing only the average of the autonomies, the most affordable are, in this order, Asturias, Galicia, La Rioja, Aragón and Castilla y León, while the greatest imbalances are found in the Balearic Islands, Andalusia, Ceuta, Melilla, Madrid, the Canary Islands and Catalonia.

The proposal to limit the rent so that it never exceeds 30% of the average income of each area would imply carrying out a much more specific and concrete limitation than that contained in the programmatic agreement signed at the end of 2019 by PSOE and United We Can. The document approved “to put a ceiling on abusive increases in rental prices in certain areas of the stressed market”, empowering the autonomous communities and municipalities to stop large increases and temporarily freeze prices to prevent them from exceeding a threshold for now undefined and they would have to establish their own regional and local administrations.

According to data from a recent report by the Workers’ Commissions, 59% of the population that resides in rent in Spain allocates a maximum of 30% of their income to pay rent, 22% dedicate between 30% and 50% and 19% allocate more than 50%. In other words, three million people, 41% of tenants, spend more than 30% of their income on rent, “an excessive effort that exceeds the reasonable maximum according to the criteria of solvency and ability to pay.”

On the other hand, those who are against limiting rents argue that these measures cause adverse effects on the market and substantially reduce the supply, since a large part of the owners with rental properties go to the sale before the prospect of see their yields reduced. Price regulation, they add, also expands the black market and reduces the quality of the residential park, since the landlord stops investing money in the improvement of their properties. These controls, they continue, reduce investor interest and reduce the income of small rental home owners (up to 10 properties), which are the majority in Spain.

This week, after two meetings that ended last Tuesday and Wednesday without great progress Between the Secretary General of Housing of the Ministry of Transport, Mobility and Urban Agenda (Mitma), David Lucas, and the Secretary of State for Agenda 2030, Ione Belarra, negotiations will return to try to reach a consensus on the first draft of the future State Housing Law .

The points are still very far apart, since Unidos Podemos proposes formulas to limit prices, prohibit evictions to vulnerable families and force large holders to mobilize housing towards affordable rent, and the PSOE is more in favor of expanding the park’s offer affordable through other tools such as tax incentives.

Last week, the Mitma minister, José Luis Ábalos, defended that the norm “works to stop abusive increases, but not because of general interventionism.” “I have always defended housing as a right and this law wants to guarantee that social function” but “we must not ignore that it is also a market good”. However, the President of the Government, Pedro Sánchez, assured on Friday that the regulations will go ahead despite the initial shocks and differences.