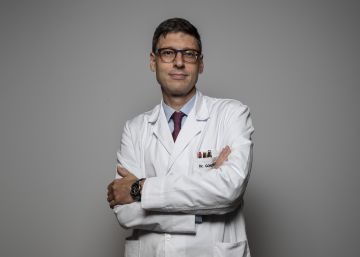 The oncologist Antonio González Martín He has been exactly half his life fighting ovarian cancer. He was born 50 years ago in Madrid and at 25 he began to investigate the tumor at the Ramón y Cajal Hospital. “The situation was very poor at the time. We did not know anything about the biology of the disease. Very few patients reached five years of survival after diagnosis, ”he laments.

The situation is changing rapidly, fortunately for the more than 200,000 women who are diagnosed each year in the world, but the enemy is still deadly in more than half of the cases. There is no effective method for early diagnosis and the symptoms - they swollen, pelvic pain, constant feeling of having to urinate - they are very nonspecific, so cancer is detected in an advanced stage in 75% of patients. The five-year survival barely reaches 30%, but Gonzalez's team brings good news for affected women today.

The oncologist, from the University of Navarra Clinic, presented the results of a study with 733 patients with advanced ovarian cancer this afternoon. After receiving the usual chemotherapy, the women took a pair of niraparib pills every morning for 36 months, a new drug that torpedoes the ability of cancer cells to repair their damaged DNA. "We have seen that the risk of relapse is reduced by approximately 40%," Gonzalez celebrates.

The results offer hope to women with a very poor prognosis. If a patient has a risk of relapse of 80%, taking the niraparib that figure would theoretically be reduced to 48%. The investigation, presented at the congress of the European Society of Medical Oncology held in Barcelona until Tuesday, it is published today in the magazine The New England Journal of Medicine.

Niraparib belongs to a type of drugs known as PARP inhibitors, a protein that repairs damage to cell DNA. By blocking the action of PARP, the drug prevents cancer cells from repairing their multiple failures and facilitates their destruction. In some cases it works like a switch that turns off the malignant cells, but the scientific community has yet to define its true potential.

The new research has been funded by Tesaro, the US biopharmaceutical company that developed the niraparib and was bought in December by British giant GlaxoSmithKline by about 4.6 billion euros. The Spanish Ovarian Cancer Research Group, chaired by González, has coordinated the international clinical trial in 181 institutions, such as La Paz Hospital in Madrid, Reina Sofía de Córdoba, MD Anderson Cancer Center in Houston and Memorial Sloan Kettering from New York.

"We are moving towards an increasingly personalized medicine, aimed at patient subgroups," says oncologist Pilar Barretina

The results, according to the oncologist, suggest considering niraparib as "a first treatment option" for women with advanced ovarian cancer who have successfully completed chemotherapy. However, Gonzalez is cautious. "We still cannot ensure that niraparib reduces ovarian cancer mortality, because the study needs more follow-up time," he warns.

Pilar Barretina, a doctor at the Catalan Institute of Oncology and co-author of the work, is optimistic. "We have more and more treatment options for groups that so far had very few," he applauds. "We are moving towards an increasingly personalized medicine, aimed at subgroups of patients," he explains. The clinical trial has studied, for example, the effect of niraparib in women with a type of disorder in the repair of their DNA called homologous recombination deficiency. In patients with this condition, who were half of the study, the benefit of the experimental treatment was even greater, reaching a 57% decrease in the risk of relapse.

Niraparib also works best in women who have inherited harmful mutations in the gene BRCA1 or in the BRCA2, associated with an increased risk of breast or ovarian cancer. About 20% of ovarian tumors are hereditary and are mostly related to these mutations, according to data from the Spanish Society of Medical Oncology. In most cases, however, the causes of this cancer are unknown.

“PARP inhibitors can change the natural history of the disease. We hope to see an impact on survival during patient follow-up, ”says Barretina. Until this hope is expressed, the great battle is to achieve an early diagnosis. In cases that are identified soon, which today are only 25%, the five-year survival exceeds 90%.