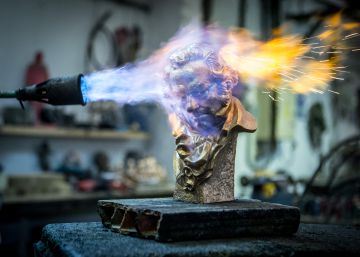 How do the voters of the Goya think? Who do they vote for and why? EL PAÍS has asked three academics, two men and one woman, about their choices. They are a director, a producer and an actor who anonymously have agreed to explain their decisions in the main categories in the Spanish film awards. None compete this year or have a direct relationship with candidate films and nominees. They are three respected members of the Spanish film industry. One has Goya and another has been a candidate on several occasions. Here are their votes and their explanations:

Director: "The infinite trench. It seems to me the most complete, in a very good year - I liked many and that is rare. I do not mind its duration, because they are 33 years long. I doubted if they could make a film outside the Basque Country, and they leave. By the way, What burns It seems overrated. Please, that fiction-reality mechanism is much better by Isaki Lacuesta ... And Leonard Cohen's song video clip with the cow, ugh. "

The producer: "For me the best Outdoor. Tell the story that has caught me the most and the characters interested me a lot. And it seems to me that in addition the works of all the artistic and technical departments stand out and fit. The others do not reach me What burns neither Pain and glory. "

The actor: "I have chosen Outdoor. I hesitated between this and The infinite trench, and finally I voted for that of Benito Zambrano. I like the use of atmospheres, although I think the director inherited the project with the actor already chosen and I don't know if another one was better. But I like all that western aroma that has such a deep relationship with deep Spain. I care that art conveys something to me that I can't digest or rationalize at first. And then at home I face it. With Outdoor I had a sensitive relationship. "

Director: "The other movie that I liked a lot is Pain and glory, so I have distributed my vote and here I have given it to Almodóvar. "

The producer: "The trio of The infinite trench. Because they take a brutal game to the actors. You breathe their fear, you feel the atmosphere they wanted to create. And that they have achieved unity between three directors seems admirable. "

The actor: "The three directors of The infinite trench They do a commendable job. As a spectator I was locked up with the protagonist. The eye of the beholder is within that zulo, and you live the reality in an obsessive way from that hollow. And they point to that zulo as a metaphor for Francoism, fear of Lorca, the sun, to live. Add to that the brilliant direction of actors ":

Director: "Galder Gaztelu-Urrutia, from The hole, because it's a movie that surprised me a lot. I thought I was going to be a guy Cube 20 years later, it was a concept movie that sold out in five minutes ... and not at all. "

The producer: "I voted to Galder Gaztelu-Urrutia, from The hole, because it seems to me a very daring, risky proposal. I had never seen that story, and you can see a direction and a special look behind the camera. I recognize that I hesitated with Aritz Moreno, of Advantages of traveling by train, which is also very interesting. "

The actor: "Little can I talk to you because none of me is passionate ... I have to tell you that I didn't understand The daughter of a thief; they really didn't vocalize! "

Director: "The one of Mother. The movies of Sorogoyen I had never liked it and it surprised me. I am fascinated by the moment in which, after the initial short, the poster 'Ten years later' appears. I saw her without knowing much about the second part and she dislodged me. "

The producer: "The libretto that I think is rounder is that of Outdoor. The rest I have buts. And I think in While the war lasts It has not deepened in certain situations and remains on the surface. A great opportunity has been lost. "

The actor: "The one of The infinite trench, definitely. You think that you are going to see a history of the Spanish Civil War and it is written so that you forget about the time, which can happen in any place and time ".

Director: "Antonio Banderas, in Pain and glory. Why Antonio de la Torre It's very good, but I've seen him play that role five hundred times. Banderas thinks about it until the Hollywood Academy, so I'm not very original. "

The producer: "I believe from the beginning to the end Antonio de la Torre in The infinite trench. The fear, the insecurity, the doubts of the character, even at some point his cowardice, are all there. It generates empathy with Higinio even in its most debatable decisions. "

The actor: "Starting from that Pain and glory I'm not interested in anything, I'm going to Antonio de la Torre, for The infinite trench ... Very interesting. Let me highlight Karra Elejalde in While the war lasts, for its truth and its interpretive impudity. Few actors have it. Others would fall into ridicule. Very few have that value, Walter Matthau type. "

Director: "There is a lot of level here ... although I voted for Belén Cuesta. It has a lot of fun.

The producer: "I was doubting between Bethlehem Cuesta Y Marta Nieto, and finally I voted for Nieto, for Mother. Because it carries the full weight of the movie and you don't look away from it. I like all the details it provides. Defend the character with a great truth. It only has a small detail in a sequence that floje ".

The actor: "Belen Cuesta ... and Marta Nieto, in Mother. I like both. I know Marta and she is generous. She is an actress bergman, with absolute control of the gesture. "

Director: "I voted to Eduard Fernández in While the war lasts. Because it's funny, it reminds me a lot of Gian Maria Volontè in the films of Elio Petri or Francesco Rosi, very exaggerated. "

The producer: "Luis Callejo, the bad guy of Outdoor. It is a big hit in a character that you can catch mania, disgust ... and instead it does not exaggerate. It is based on naturalness. "

The actor: "I liked Luis Callejo. Very content. And Eduard Fernández in While the war lasts. That histrion handles it perfectly. Curious, I didn't like anything in The daughter of a thief, and I think he is one of the best actors in the world. "

Director: "Julieta Serrano, in Pain and glory The sequence in which he asks his son not to take out the neighbors because they do not like to be on screen caught me. With that phrase the Goya is already taken ".

The producer: "In this one I did not vote for any because none convinced me."

The actor: "Mona Martínez, for Goodbye. I like it, yes. Although I don't believe much in general Goodbye".

Director: "The artistic direction of Advantages of traveling by train. One last. Oh, and it seems wonderful Buñuel in the labyrinth of the turtles in animated feature film ".

The producer: "I would like to highlight the artistic direction of Advantages of traveling by train. Not only does the work of Mikel Serrano marvel at me, but also, when you know how little money he has done, I admire him even more. "

The actor: "I was surprised by the low level of fiction short films of this edition."