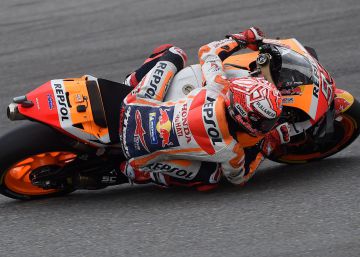 Fabio Quartararo has been the fastest in the free practice session of the Grand Prix of the Czech Republic. The Frenchman has the ability to score fast laps, he has added three pole position in his MotoGP debut season, and he turns to Brno freed from the pain he suffered in his right arm. The holidays have been balsamic to recover from the sores left by an operation of the compartment syndrome and the fact of chaining, without time to recover, the careers of Catalonia, Assen and Sachsenring. His arm swelled so much that it was necessary to make a sleeve for his leather jumpsuit.

Behind the rookie Yamaha Petronas, qualified Marc Márquez, eager not to give up one iota of the advantage, 58 points over Dovizioso, achieved in the first half of the season. Two Ducati, from Miller and Dovizioso, two other Yamaha, Viñales and Morbidelli, and one Suzuki, Rins, complete the seven best times. The classification reflects the situation in Honda. Márquez understands perfectly with his motorcycle, has won five races of nine, but the other riders of the brand suffer the unspeakable to master it. Keeping the front wheel in the good path is an arduous task. The Honda is an intricate motorcycle, which requires skillful hands and powerful arms to make it run. The most obvious example is Jorge Lorenzo, in the dry dock after being injured in a fall in Assen and who, since arriving at HRC, does not know what it is to finish a race in the top ten. His replacement while not recovering is Stefan Bradl, a knowledgeable expert of the Honda because he is the usual test driver, but he finished fourteen in the training sessions of Brno.

Outside the official structure, things are similar. In the Honda-LCR satellite squad, Cal Crutchlow shows no satisfaction with the Honda. Although he made a podium in Sachsenring, benefited by a fall from Alex Rins, the British does not have the point caught on the bike. In their box they confess that they finish the races exhausted by the effort. "Marc knows that nobody can drive the Honda as he does and uses it in his favor. He does not want to have competition or threats," said the Briton days ago. Takaaki Nakagami, second pilot of the satellite team, has raised his voice to demand Honda a black leg motorcycle ahead of next season. For now, the young Japanese driver runs with material from the previous year.

Given so much noise, Takeo Yokoyama, HRC chief engineer, is blunt: "our priority is Marc." The brain of the tuning of the Honda values ​​that "when you have a pilot like Marc is very beneficial, because he is very good at understanding the bike and helps us a lot when developing it." Yokoyama flatters Márquez, "he knows what the motorcycle needs", and he doesn't cut himself when assessing the requests of the other drivers of the brand. "Lorenzo is having a hard time going faster, more than we all thought," he says in relation to the poor results of the Mallorcan. For Crutchlow, a more poisonous dart: "We all know that he likes to talk more about the account," he said Friday. Asked about whether the Marcdependence It may be a problem for Honda, Yokoyama points out that "if Márquez takes a vacation or goes anywhere, then we will work in the best direction for the other drivers, but Marc is not going anywhere," he settled.

Alberto Puig, sports director of HRC, argues that the Honda "is not a motorcycle made to measure for Marc" but details that the 93 knows how to adapt to the peculiarities of the machine. "He has taken advantage of Honda's strengths and adapt to its weak points." Proof of this, says Puig, is that this season "falls less." The expiloto does not hide that in the case of Lorenzo the adaptation problems are "obvious", but on the different tuning that Honda pilots have with the motorcycle, Puig minimizes that it is a mount only suitable for the way of driving Marquez and he points out that "it is logical that if he asks for something he will be heard, because then the results are there."

Márquez himself summed up how things work in the world cup. "If you win it costs more to change things." The world leader was referring to his reservations to use the new carbon chassis to the detriment of aluminum, which is giving such a good result. The results rule.