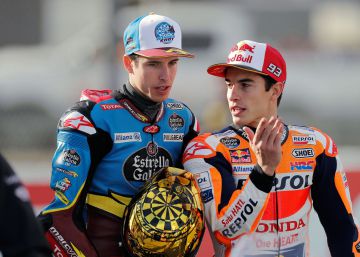 For Honda, two Marquez are better than one. Álex, the little one in the saga, is the one chosen to keep the motorcycle he leaves free Jorge Lorenzo's withdrawal. The two-time world champion, who won the Moto3 title in 2014 and has conquered the one of Moto2 In 2019, he will make the leap to MotoGP The season that is enlisted in the most powerful squad of the grid, the Repsol team, and with a motorcycle that is a spicy caramel: the engine is a rocket, but its passage through a curve is so devilish that it has brought head to boredom to a pentacampeón of the world like Jorge Lorenzo, and a veteran of the races like Cal Crutchlow. Álex accepts the challenge convinced of the possibilities of being integrated into a structure that looks like a dazzling winners, winner of eight of the last 15 World Cups, and strongly supported by the number one team: his brother Marc. "You are ready to ride a MotoGP", the category dominator has warned. Despite noting that the Honda "is a difficult motorcycle for a debutant," the MotoGP champion has not hidden the "illusion" that makes him able to share equipment with Alex.

The resignation of Jorge Lorenzo To fulfill the year of contract that I had with HRC has had, as a side effect, the need to find a relief relief for next season. Johann Zarco, the Frenchman dispatched from KTM and recalled by Honda to cover Nakagami's casualty on the LCR satellite team, seemed to be placed a priori in a preferred position to keep Lorenzo's mount. But the statements of Alberto Puig, admitting that "of course" was going to assess the possibility of incorporating Alex Marquez, altered the succession chronology. From the first moment, the surroundings of Álex Márquez were responsible for clearing doubts about whether the pilot would be interested in occupying the handlebars left vacant by the Mallorcan.

"No rider would give up an offer to be in MotoGP with a factory motorcycle," said Emilio Alzamora, manager of the Marquez. Alex, 23, suffers the permanent comparison with his brother Marc, 26, who won his first title of the maximum displacement at age 20, and carries the pressure of being examined with a magnifying glass by his last name. Marc has commented on several occasions that his younger brother should be given notes for his own achievements, and not for being anyone's brother.

By conquering the Moto2 title in MalaysiaJulià, the father of the boys, publicly denounced "the pressure" that his young son bears. However, in the Márquez clan it was clear that all this burden was not going to be a brake for Alex's arrival in the Repsol Honda box. It was not the first time a similar situation occurred. Marc himself recognized in a press conference: "Two years ago, he did not look like a MotoGP rider, now he does." After championing in the small category, Alex jumped to Moto2 but his journey was discreet for four seasons until he gave, this year, with the key that drove him to the title. Marc has open negotiations to renew with Honda beyond 2021, but has begun to decouple his contract from the arrival of the brother. "I will not force things," he said. Without forcing, the pieces have ended up fitting.

The contract that Álex had signed with the VDS team to compete next season in Moto2 and try to revalidate the title has not been a problem either. When joining in the same workshop, the Marquez have cleared the obstacles at full speed.