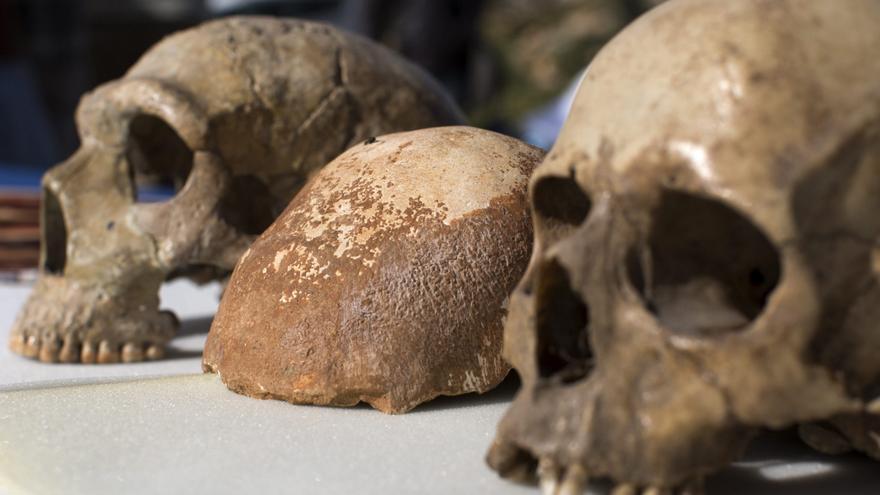 When did the first human beings emerge who were like us? A simple question with a complex answer. For decades it was thought that a region of eastern Africa, in what is now Ethiopia, was called 'cradle of mankind'. There in the sixties fossils of Homo sapiens at least 195,000 years old were discovered. They were christened 'Omo I'. In 2017, a find in Morocco fixed the oldest remains at 300,000 years, extending the metaphor of the 'cradle of Humanity' to the entire African continent. Now, the trace of a volcano has allowed the remains of Omo I to be dated again: they are at least 230,000 years old, that is, they are 35,000 years older than established.

The finding has been made by an international team of scientists under the direction of Dr. Céline Vidal, from the Department of Geography at the University of Cambridge. Your results are published today in the magazine Nature.

To achieve this reassessment of the Omo I -which is not the first- Researchers have dated layers of volcanic ash found above and below fossils and archaeological materials. "The fossils were found in a sequence, under a thick layer of volcanic ash that no one had managed to date with radiometric techniques because the ash is too fine grained," says Céline Vidal it's a statement from the University of Cambridge.

Scientists have attempted to date all major volcanic eruptions in the Ethiopian Rift to around the time of the appearance of Homo sapiens, a period known as the Middle Pleistocene (between 780,000 and 127,000 years ago).

For this they have taken samples of pumice (pumice) from volcanic deposits and has ground them into particles smaller than one millimeter. "Once the rock has been crushed, the minerals within it are released and then the chemical signature of the volcanic glass that holds the minerals together can be dated and identified," says Vidal. Thus, at last it has been possible to date the thick layer of fossilized volcanic ash that covers the site where the remains of Omo I were found, ash from the Shala volcano (distant about 400 kilometers and today turned into a lake).

The team has dated pumice samples from the volcano as old as 230,000 years. Since the Omo I fossils were found deeper than that particular layer of ash, the researchers deduce that they must be more than 230,000 years old.

Omo I possesses unmistakable modern human characteristics, such as a tall, globular cranial vault and a chin.

Dr Vidal's cry of 'eureka' was not immediate: "I first discovered that there was a geochemical match, but we were not as old as the Shala eruption. I immediately sent the volcano samples to our colleagues in Glasgow for age measurements. When I received the results and discovered that the oldest Homo sapiens in the region was older than expected, I was very excited. "

"Unlike other Middle Pleistocene fossils believed to belong to the early stages of the Homo sapiens lineage, Omo I possesses unmistakable modern human characteristics, such as a tall, globular cranial vault and chin," says one of the co-authors of the research, Dr. Aurélien Mounier, of the Museum of Man in Paris, and adds: "The new estimate of the date, de facto, makes it the oldest Homo sapiens in Africa without question."

The discussion Mounier refers to points to the Yebel Irhoud site in Morocco. There in 2017 fossils were dated from about 300,000 years ago, in an investigation who also published Nature. But morphologically - even if they were from Homo sapiens - these remains had some primitive cranial features, that is, they were not exactly like modern Homo sapiens. For example, the cranial box in the remains of Morocco was elongated, like that of archaic humans, not rounded like that of its modern counterparts (that is, us).

In any case, try to win the race backward dating the oldest remains of Homo sapiens does not make much sense, says Vidal: "We can only date humanity based on the fossils we have, so it is impossible to say that this is the definitive age of our species. The study of the Human evolution is always on the move: boundaries and timelines change as our understanding improves. But these fossils show how resilient humans are: that we have survived, we have thrived and we have migrated in an area that was so prone to natural disasters".

Another of the co-authors of the finding, Professor Christine Lane - director of the Tephrochronology Laboratory [datación de cenizas volcánicas] from Cambridge University - puts the goal on the horizon: "Our forensic approach provides a new minimum age for Homo sapiens in East Africa, but the challenge remains to provide a cap, a maximum age for its appearance, which is It is widely believed that it took place in this region. It is possible that new findings and new studies extend the age of our species even further back in time. "