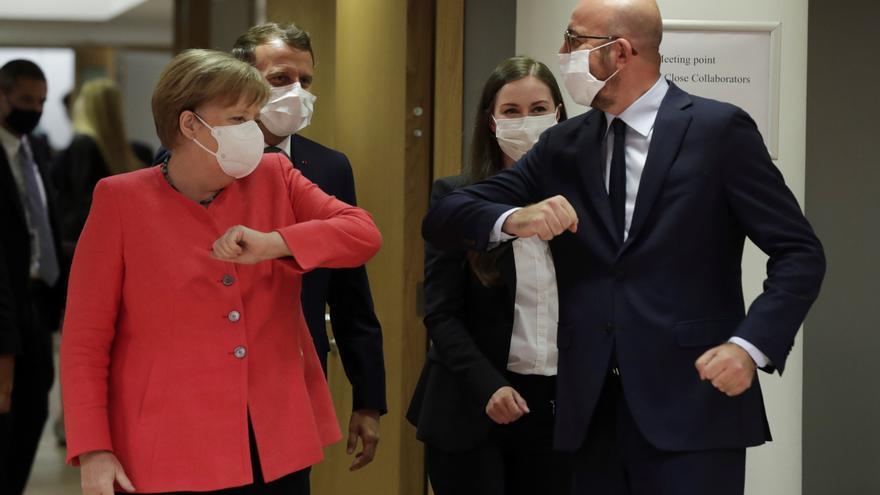 The vast majority of the room is in favor of the proposal that is on the table. Except for a handful of countries, self-described frugal –Holland, Austria, Denmark and Sweden– who are still engaged in their blockade of the recovery fund. And, in addition, they play with time despite the fact that the European Union has more than 180,000 deaths from the coronavirus and the economic prospects are devastating.

Dutch Prime Minister Mark Rutte insisted on strict conditionality for the recovery fund, currently set at 750 billion, upon entering the summit in Brussels: “We believe that it is very important for countries to carry out reforms. If you want transfers instead of loans, which is not such a good idea, we tell you that you have to give very strong guarantees that these reforms will be implemented. “What reforms?” We must ensure that economies become more resilient. And there is a reason for all this, and it is the fact that we need a strong Europe in an unstable world, but a strong Europe also means that countries that are lagging behind in terms of reforms, when it comes to the labor market, pensions etc., they need to catch up. If you want loans and even grants, I think it is logical that you can explain to the citizens of the Netherlands that these reforms have taken place in return. Instead of just guarantees that they will be carried out. ”

The shadow of the Dutch veto in a negotiation that requires unanimity threatens to break the meeting. But Rutte argues that the European Council is a “permanent exchange of thousands of vetoes”.

These cross vetoes also affect conditionality regarding compliance with the rule of law to receive funds, a clause designed for the Visegrad group – Hungary, Poland, Slovakia and the Czech Republic – which is not amused, especially the Hungarian Viktor Orbán (Fidesz / PPE).

“I am not optimistic at the moment,” Rutte continued, “but you never know, nobody wants another summit. I calculate that the possibility that we will reach an agreement this weekend is less than 50%. Also: in the end, the content is more important than speed. A fragile compromise will not take Europe any further. ”

German Chancellor Angela Merkel, the current president of the EU, the main country and economy of the community club and whose proposal with the French Emmanuel Macron laid the foundations for the architecture of the recovery fund that is being discussed, also cooled the possibility of a According to his arrival at the Europe building of the European Council: “The differences are still very, very large, we have very, very difficult negotiations ahead of us. I still cannot predict if this time we will achieve a result. It would be desirable, but we must also face the reality. And it really takes a great willingness to reach a compromise on the part of all if we want to achieve something that is good for Europe. I expect very difficult negotiations.

Austrian Prime Minister Sebastian Kurz arrived warning that his frugal partners, Denmark, Sweden and the Netherlands had coordinated his position, later adding: “While some positive steps have been taken on the EU’s multi-annual budget, the positions remain far between Member States on the Recovery Instrument, especially in terms of volume, funding and objective. We have to make sure that the Instrument will support green and digital transitions, structural reforms and benefit those who have been most affected due to the coronavirus crisis. We will not accept any measure that leads to a permanent transfer of resources [es decir, que el instrumento sea temporal]”

The President of the Government, Pedro Sánchez, for his part, has recognized that Europe is facing “an unprecedented situation”, because it is experiencing “the most serious pandemic of humanity in the last 100 years.”

“All the Member States are called to reach a good agreement for our compatriots and citizens who are suffering the economic and social consequences of the pandemic,” Sánchez said: “We are all obliged to reach an agreement that must establish a fund. of recovery that transforms economies to make them more resilient, greener and more digital, with social and territorial cohesion as an objective. ”

The Prime Minister has assured that “Spain attends this summit with the aim of reaching an agreement, of defending our national interests, as is the case of agriculture, and on how we conceive governance, where are the policies in which You have to focus on the EU fund and budget, but with a constructive spirit of reaching an agreement. ”

French President Emmanuel Macron, for his part, said on reaching the summit that it would be “a moment of truth for Europe.” He added: “We will do everything possible to reach an agreement that allows us to establish the economic, social and environmental recovery of Europe.”

That focus of where the money goes, in addition to the protection of the Rule of Law, is what has Visegrad and the East of the EU on alert. Poland does not like proposals linking payments to a climate objective and the rule of law, Prime Minister Mateusz Morawiecki recalled upon arrival at the summit. Morawiecki claimed that Poland “sees no basis” for Michel’s proposal to make access to the new Fair Transition Fund – the one aimed at decarbonising the EU – require a commitment to climate neutrality by 2050: “Link those two areas [presupuesto y estado de derecho]These two completely different legal areas create a huge threat of legal security. We can’t agree with that. ”

Czech Prime Minister Andrej Babiš said for his part: “We will see the impact of the pandemic next year, and this impact will be mainly on GDP, which should be the” most important criterion for distributing recovery funds. He added: “The mantra in Brussels is the Green Deal and the digital transition. But we have to take care of our traditional industry. And the biggest danger is in the European auto industry. We know perfectly well how we should use the money, and we have to make reforms, not only in Green Deal. We will support the recovery of all member states, but the money must be distributed correctly and fairly. ”

Between “thousands of vetoes crossed”, as Rutte said; “before an unprecedented time in 100 years”, as Sánchez announced, and in the face of “very, very large divisions”, as Merkel warned, European leaders are locked in Brussels with the challenge of reaching an agreement to get out of the economic and social collapse of the coronavirus crisis.