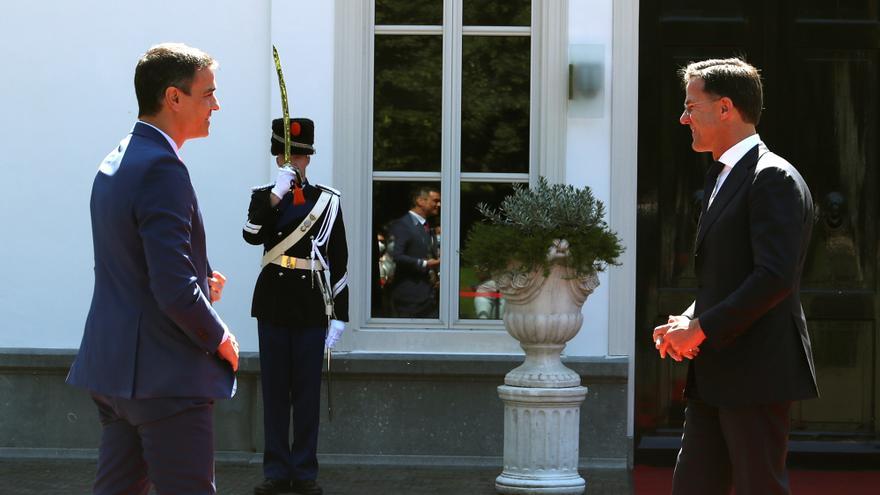 “They have to find a solution.” This is how the Dutch Prime Minister, Mark Rutte, aired questions about the recovery fund negotiations in the face of the economic crisis caused by the pandemic before meeting with the President of the Spanish Government, Pedro Sánchez. Rutte, prime minister of a country of 17 million inhabitants and one of the strongest frugal people – along with Denmark, Finland and Austria – maintains two main axes in the negotiation: he does not share the amount put by the European Commission on the table – 750,000 million–, nor its distribution –500,000 in transfers and 250,000 in loans–, and calls for severe conditions, as well as the return as soon as possible to the stability and growth pact to reduce debt and deficit ratios.

With almost 180,000 deaths in the EU due to coronaviruses and forecasts for a drop in GDP of over 8% in the euro zone – Spain would reach 10.9%, according to Brussels -, the leaders meet this Friday and Saturday in Brussels to try to agree a recovery fund to alleviate the economic disaster and the budgets for 2021-2027.

“This is politics, the solution will not be easy, but I hope there will be one,” Rutte acknowledged this Monday before meeting with Sánchez, whom he has summoned to unblock the negotiation: “They have to find a solution.” Thus, the Dutch prime minister castles himself in his position, summons the counterpart to move the card. And it does so four days after having scored a great victory: the defeat of Nadia Calviño in the race for the presidency of the Eurogroup for the benefit of the Irish Paschal Donohoe.

Sánchez is on a European tour, visiting Rutte this Monday; German Chancellor Angela Merkel on Tuesday and Swedish Prime Minister, and also frugal – albeit a Social Democrat – Stefan Löfven on Wednesday.

“It is vital to reach an agreement at the next European Council, losing more time will only delay recovery”, Sánchez tweeted after meeting Rutte: “We need a response according to the magnitude of the pandemic, that will make us come out of this crisis with a Greener, digital and inclusive Europe “.

After these three meetings – which are added to the meetings that Sánchez has had with his counterparts in Portugal, Antònio Costa, and Italy, Giuseppe Conte, both aligned with Spain – the European Council summit will be held. “It is imperative that the EU reach an agreement in July,” Sánchez said last week in an interview in La Sexta. The date is key for the Spanish Executive because the distribution of European funds will largely depend on the General State Budgets for 2021 at a time when a drop in GDP of around 11% is expected.

The negotiation will be based on proposal presented on Friday by the President of the European Council, Charles Michel, who is already giving ground to the countries of the North versus the South: a 2.36% reduction in the Community budget for the period 2021-2017 compared to the initial idea proposed by the European Commission, new aid for the countries most affected by Brexit – such as the Netherlands – maintains compensation for net taxpayers – such as frugal and Germany – and reinforces conditionality to access funds, an issue on which the Government wants to remove significance.

The Minister of Foreign Affairs, Arantxa González Laya, affirmed this Monday in Brussels: “We face this issue of conditionality with responsibility and without fear. We understand that an exercise of solidarity must entail an exercise of responsibility, and that the best way to making sure there is transparency about solidarity and the responsibility is to put on the table what the conditions are. It seems to us that this fund must be aimed at accompanying the efforts of the countries that have suffered the most from the Covid crisis as the first element of conditionality, secondly, it seems to us that it must be aimed at achieving objectives such as decarbonisation, and a third element of conditionality to verify how the milestones that will be set are being met, such as the European semester ” .

Spain reaches the final negotiation after the setback in the vote of the Eurogroup presidency to which the economic vice president, Nadia Calviño, aspired. “The negotiation is going to be complicated, just as it was the day before yesterday”, Calviño herself recognized.