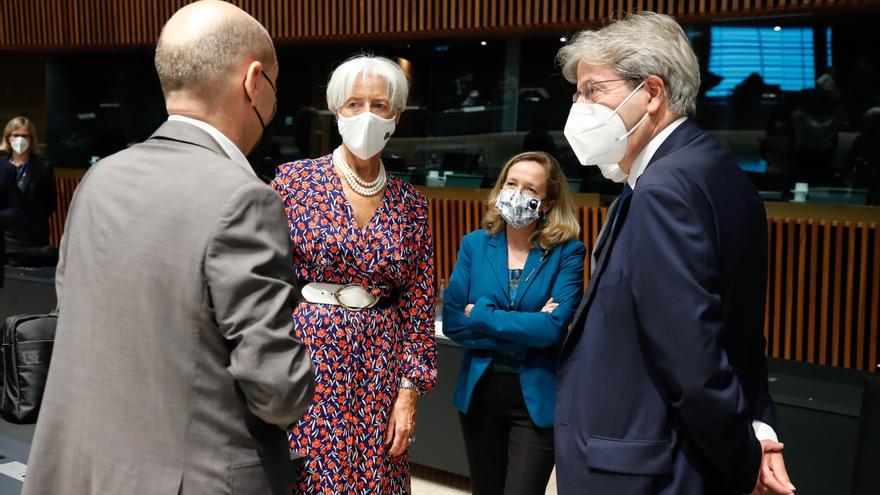 From the United States to the OECD there are voices of the risks of stifling the recovery after the pandemic. But the European Union is divided, and the hawks are already showing their claws. This Friday, at the beginning of the Eurogroup and Ecofin meetings in Slovenia, all members of the New Hanseatic League - The Netherlands, Austria, Denmark, Latvia, Slovakia, Czech Republic, Finland and Sweden - have issued a letter in which they state: "It is worth discussing the simplifications and adaptations that favor a consistent, transparent and better application, as well as the compliance of the rules, but only if the new proposals do not jeopardize fiscal sustainability. "

In other words, they open to discuss the reform of the Stability and Growth Pact, which establishes the limits of 60% of GDP for public debt and 3% of GDP for the deficit, if fiscal sustainability is not endangered. .

In the background is the debate on how to return to those macroeconomic peaks when the pandemic has triggered the debts and deficits of the 27. And when everyone in Europe knows that the recipe for hawks in the past, and applied in the EU, it has had to do with sacrifices and cuts in public services, pensions and unemployment benefits, among others.

"It is no secret that there are very different positions on how we have to approach this revision of fiscal rules," acknowledged the economic vice president, Nadia Calviño, "but I believe that it is a necessary debate to try to modernize, simplify and adapt them. to the needs of a recovery that we have to support with monetary policy and fiscal policy in the coming years, so that it will be a digital recovery, a green recovery and a fair recovery that reaches all European citizens. I hope that in everything If we have the new rules that are appropriate before we get out of this extraordinary situation. "

Calviño continued: "Spain is a country committed to fiscal responsibility and we have also been defending the need to review and modernize the fiscal rules that we have given ourselves. We have been defending a simplification of the rules and adapting them to the reality that we are experiencing and in particular, to the investment needs derived from the recovery ".

Although the debate is not officially launched by the European Commission, the countries are already marking their position by looking askance at the German elections on September 26 and the possible government that will come out of them. Angela Merkel's candidate, Amin Laschet, keeps deflating, in favor of the social democrat Olaf Scholz, at the time German Finance Minister, who this Friday was not very open to the relaxation of the rules in Slovenia. "We have a great framework for stability in Europe and it has shown especially in the crisis that it works," he said, opting for "continuing to use the flexibility of the rules of the Stability and Growth Pact. Now it is about maintaining these rules."

"We need to return to sound public finances, but we need to have a progressive return. We should not kill growth," said French Finance Minister Bruno Le Maire, for whom the rules are "outdated" and will have to be found. others "different so that the return to budgetary balance is different."

A line that has also been defended by the Portuguese, Joao Leao, who opted to ensure that fiscal policy "does not burden economic growth" and "leaves room for public investment."

The European Commission is not yet officially working on the matter, although it is a permanent discussion. This was recognized by the Finance Commissioner, Paolo Gentiloni: "This is not a new chapter in the discussion of the last ten years, it is something that has to do with the impact of the pandemic, the green transition and the task that lies ahead. If the review is not finished by the end of 2022 "we will find ways to manage this problem."

The economic vice-president of the European Commission, Valdis Dombrovskis, has defended, for his part, the balance between fiscal sustainability and investment needs when reviewing the deficit and debt control rules: "Some of the problems identified before The crisis has now become more pronounced. Clearly we will need debt reduction paths that are realistic for all member states, we will need a balance between the need for fiscal sustainability and that of supporting economic recovery. "

The OECD enters the debate

The Organization for Economic Cooperation and Development (OECD), for its part, has asked the European Commission to reformulate its fiscal rules soon, since their application would force several European countries to enter a recession for being too strict, reports Europa Press.

This is clear from the report Economic study of the European Union and the eurozone, published this Friday, which warns that although the recovery is underway, countries should not think about withdrawing stimuli prematurely to avoid negative consequences at the economic and fiscal level: "The European fiscal framework showed limitations in the past and there is reason to believe that its implementation could face new challenges after the current crisis. "

The body headed by the Australian Mathias Cormann believes that Brussels should evaluate its fiscal rules to improve them, since in the past they did not avoid a pro-cyclical fiscal policy and they have become "too complex".

"In the coming years, compliance with the debt reduction rule would require major consolidation efforts in many euro area countries, with the risk of negatively affecting the recovery," the OECD insisted.

The rules have been suspended for 2021 and it is expected that they will also be annulled by 2022. However, before the summer the European Commission already advanced the possibility that they will be reactivated from 2023, which will be the scheduled date on which all European economies regain their pre-crisis level of GDP.

At the end of August, the Bank of Spain advocated the need "for a paradigm shift" in the design of the fiscal policy framework of the European Union, considering that an improved governance of fiscal rules should be incorporated, which should be " simpler, more operational and credible than the current ones ".