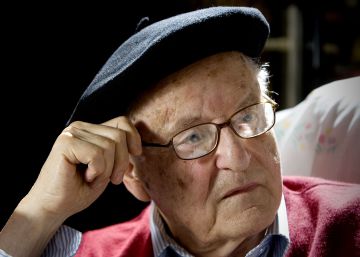 Your book The Spanish Republic and the civil war it appeared in English in Princeton in 1965 and in the editorial Crítica, in Spanish, in 1976. The twentieth century Spanish was then, with the exception of some scattered oases, an unexplored desert.

Gabriel Jackson, together with Hugh Thomas, who had published his book four years earlier, became the obligatory frame of reference in the face of petty and meager dominant Francoist historiography in Spain. Trained at Harvard, interested in the formulation of problems and concepts and not only in the mere account of the facts, and convinced that it was possible to elaborate "objective" interpretations – that is, equanimous and based on research -, he definitely broke with the partial and manichaean versions.

He had access to fundamentally secondary and heterogeneous sources impossible to consult in Spain, and with numerous direct testimonies about the conflict, some, such as those of George Orwell or Franz Borkenau, of remarkable interest. He showed an open sympathy for the Second Republic and underlined the "passion of the Spanish people" for idealistic causes. The Republic was for him the first democracy in the history of Spain, destroyed by fascism in a civil war. And what it was about was to trace the structural peculiarities capable of generating a conflict of such magnitude.

He researched and wrote that book from 1955 to 1964. He defended the thesis that the Republic had from the beginning very little chance of survival due to the "hostility of the financial world." And then, since the military uprising of July 1936, the hostility of all the great powers, except the Soviet Union, "placed the Republic in a situation of overwhelming inferiority."

Jackson knew that the Spanish civil war competed for the Western world the confrontation of democracy, fascism and communism, an idea that he later developed in different works and that extended in his telescopic gaze Civilization and barbarism in twentieth-century Europe.

In his opinion, Franco's total victory "did not fix anything," because "neither General Franco nor the powerful classes that supported him had nothing to offer in the field of a social program that could solve the country's historical problems." The Civil War had immediate consequences repression and destruction, but, over time, he thought, it would be recognized that "in July 1936 the Spanish people faced the alternative of submission or resistance." That moral greatness of the struggle for freedom would end up being remembered as a great battle against the tyranny of fascism that had been imposed in Europe.

He donated part of his documentation to the library of the University of California, San Diego, to which he had contributed so much in 1965 to purchase the Herbert Southworth Civil War collection. He was a scholar, music lover, a great connoisseur of Joaquín Costa and Juan Negrín. His work is an example of narrative synthesis, literary beauty, reflection and empirical rigor.

Born in New York, he lived 26 years in Barcelona, ​​loved Spain and we loved him. He returned to the US in 2010, to live with his daughter Kate. With him we begin the historians of my generation to study the Civil War. Decades later, his work continues to captivate us. And there is always his teaching: only a true parliamentary democracy was able to remove Spain from backwardness and misery. The Republic was too weak and could not survive, but it was the hope of millions of Spaniards, the tragedy of a people in their "titanic struggle" for freedom.