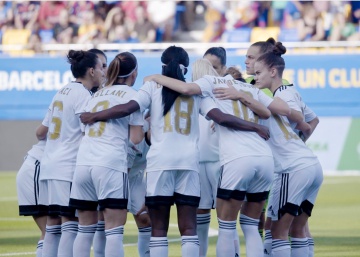 In just five years of existence, the CD Heel it has broken with more than a century of inequality. The formation slipped into the first division of Spanish women's football in 2019 and, a few days later, Real Madrid formalized its purchase to stop being one of the great clubs in the world without a professional women's team. The meteoric rise of Esther, Lorena, Sara and the twins Malena and Samara has become a documentary series that HBO Spain has released this December 28 and will broadcast at the rate of one episode per week. The four chapters of A real dream they show the intrahistory of their players; their sacrifices, hopes, and victories that allowed the jump from the dirt pitches of Las Cárcavas, located in a humble neighborhood on the outskirts, to the luxurious facilities of the Real Madrid Sports City. But it also builds a broader debate, with current issues such as sexism, motherhood or sexual diversity.

It is not the only story that traces the recent and past history of Madrid through the documentary genre. This format has long fed the catalog of the platforms of streaming and, with the rise in this consumption pattern in the year of confinement, its presence has multiplied on small screens. These are other 2020 premieres that, like A real dream, tell the city and are available for viewing.

Stories from a neighborhood

The director Juanjo Castro has become a chronicler of the eternal fashionable district of Madrid. In Dreaming, living, creating and other stories from Malasaña he follows three of his neighbors during the celebrations of a May 2. The rapper Blonde Poulain, rehearses the concert with which he will present an album dedicated to gentrification. Lope de Aixela, walks its streets characterized as a medieval pilgrim to "make a neighborhood", offering proclamations and cultural routes. And Manolo Calderón, a former DJ in some bars in the area during the 80s, remembers times past with friends linked to the neighborhood's nightlife. Like his two previous jobs, Malasaña 80 Music Bar and #LikeMalasaña, Castro's film can be rented at Filmin for three euros.

The current situation of covid-19 forms an inevitable marriage with a genre such as documentaries, used to seeking new approaches to the issues that most affect the viewer. Through YouTube, free of charge, you can see the short film From my window: Hospital Gregorio Marañón, shot during confinement by the journalist and filmmaker Georgina Cisquella, a neighbor of the building, and dedicated to all the professionals at the center.

Another of the productions that have already addressed the coronavirus crisis, entitled 2020, has been released in theaters at the end of November and is finalizing its release to streaming. Argentine director Hernán Zin came out with his camera when the state of alarm was declared in March. He portrayed what was happening in Madrid from all fronts: hospitals like October 12, SUMMA 112 ambulances, residences, morgues, funeral homes, police checkpoints and field hospitals. The filmmaker, who has previously shot in places like Gaza and Syria, did not find easy access to the places where the tragedy was happening. But for more than four months it remained in the forefront of the pandemic. And he put a face to all those horror scenarios. From a Torrejón doctor to an old woman who faced the pandemic alone in a house she shares with her dogs.

Life of a pioneer

Madrilenian Matilde Ucelay (1912-2008) was the first woman to graduate in Architecture in Spain. He achieved it in 1936 and, from then on, he also developed a full professional career until in 2004 he became a National Architecture Prize. His biography is one of those that the documentary series reviews Pioneers, created and broadcast by Movistar + and hosted by journalist Nieves Concostrina. It appears in chapter three, dedicated to great female creators. Through dramatized recreations of real situations they lived through, interviews and archive images, Ucelay's past experiences are connected with those of a woman who is making history today, Concepción Monje, engineer, doctor in Robotics and expert in artificial intelligence. .

The man who designed Madrid

Was the artist Jose Maria Cruz Novillo, National Design Award, who created in 1983 two of the symbols of the Community of Madrid, its flag and its shield. At 84 years old, he is still one of the great names in Spanish design. The documentary The man who designed Spain by Andrea G. Bermejo and Miguel Larraya can be seen on the Filmin platform and reviews, through the artist's many works, the history of the region and the rest of the country. At least a good part of its aesthetics has been built between his hands. His are also the logo of Correos, Renfe, the PSOE or the movie poster Breeding ravens (1975), by Carlos Saura.

The origins of the new flamenco

The producer, photographer and music lover Mario Pacheco was the creator, together with Cucha Salazar, of the record company Nuevos Medios. It only recorded those sounds that its founders thought were worthwhile. Fortunately, his tastes were so eclectic that his project ranged from new flamenco to world music and made known Ketama, Golpes Bajos, Pata Negra or Martirio, in addition to bringing Spain closer to bands such as New Order and The Smiths. The documentary Revealing Mario, by Simó Andreu, reconstructs the life of the late Pacheco and can be seen on Movistar +.

What happened to Madrid Central

The documentary I do want, shot in 2018 and which can be seen through Amazon Prime Video, recalls the social movement that, not so long ago, fought against air pollution in the capital. Much has happened in a short time and the Cantabrian director Richard Zubelzu recounts how Madrid Central, Manuela Carmena's star measure of closure to traffic in a good part of the city center, has become over time a political weapon, a often oblivious to their initial goals. Throughout 40 minutes, the film gathers opinions of neighbors, activists, doctors and businessmen on issues not necessarily linked to sustainability, such as mobility and its close relationship with the quality of life of Madrid residents.