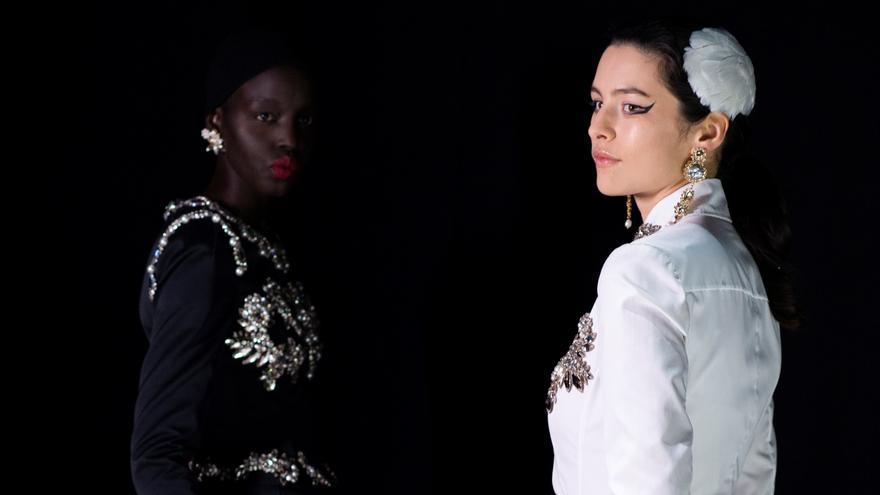 London, Feb 23 (EFE) .- Historicism, neo-Gothic in Simone Rocha and romantic in Erdem, this Tuesday placed the final touch to an edition of London Fashion Week that is completely virtual and marked by the pandemic.

Since its inception in 2010, Simone Rocha has maintained a balancing act between delicacy and roughness that leans towards the gothic in her latest autumn / winter collection.

The three graces that make up his proposal are satin, leather and tulle.

With a predominance of black in the color palette, it has revisited the perfect leather jacket with puff sleeves, in different lengths and volumes.

Combined with white shirts with pointed collars, they recall the collars inside the neo-Gothic church of Hyde Park, the location chosen for the filming of their presentation, at the hands of their inseparable Eoin McLoughlin.

Ruffles, pearls, bows, and flowers are totally devoid of their cheesy symbology.

Applied to coats, dresses and skirts of defiant volumes, they send a message of rebellion and disheveled among metallic sounds.

The three Graces appear in a recurring way: beauty, nature, creativity, abundance. In cameos or embroidered as medallions, they are camouflaged among prophetic winter roses in patches of fabric in a patchwork, in accessories or embroidered tulle.

Rocha insists on her goal of creating protective clothing, which this time complements with pearl-studded harnesses and exaggerated military boots.

The Irish woman has inherited the skills of her father, the famous John Rocha. In several interviews, he has acknowledged that it was difficult for him to give in to the cliché of the “designer’s daughter who works in fashion” but his instinct has consolidated the identity of his firm that has just launched a capsule collection with H&M.

ERDEM AT THE BALLET

The costumes of a dancer on and off the stage, parading at the same time. Satin ballet flats, leg warmers and hair ribbons under cape coats or luxurious pleated floral gowns trimmed with feathers and organza layers.

The collection recovers the enigma and style of the costumes of Hitchcock’s films, coinciding with yesterday’s presentation of Emilia Wickstead.

Erdem takes it to the pre-tension of a dance performance and endows it with opulence with maximalist jewel applications.

Among the models were four dancers from the Royal Ballet at different stages of life, including Marguerite Porter, who performed “Swan Lake” with Nureyev.

His presence wants to rescue the figure of Margot Fonteyn, the dancer who challenged the average artistic life by retiring at 50. Eternal muse of choreographer Frederik Ashton.

It is not the first time that Erdem immerses himself in the universe of dance. In 2018 he collaborated with the Royal Ballet to capture the suspended movement of the dancers.

Today the official calendar of the most avant-garde catwalk has ended. However, the incorporations of those brands that have been left out as a result of Brexit and covid-19 will be welcome.

“Richard Malone, Bethany Williams or Richard Queen were not ready in time for the LFW, so they have decided to publish their collections in March, since the platform will host the content in a perennial way,” they explain to Efe from the British Fashion Council .

Firms such as JW Anderson, McQueen, Chalayan or Margaret Howell are not part of the official calendar and have not yet revealed their proposals for next winter. Like Vivienne Westwood and Victoria Beckham, they have opted for other strategies and presented their collections independently on their social media last week.