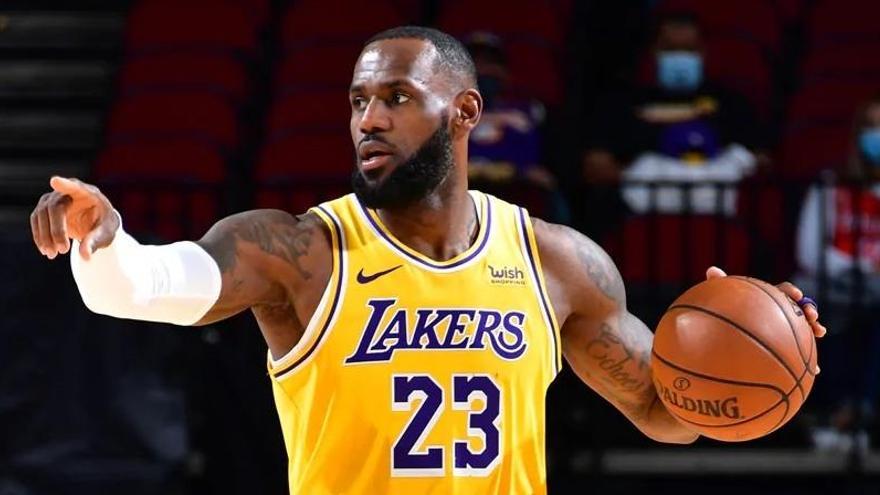 Forward LeBron James starred in his best shooting performance of the season with Los Angeles Lakers on a night full of memories with his return to Cleveland and prior to the anniversary of the death of Kobe Bryant.

Also, for the first time in the NBA two referees were part of the shortlist of the team of three, in the Orlando Magic game against the Charlotte Hornets.

Also in the Eastern Conference were the triumphs of the Boston Celtics, with the return of power forward Jayson Tatum, and the Brooklyn Nets, who they had the “Big 3” as protagonists.

James went into an offensive frenzy in the final period on what used to be his home court when scoring. 23 of his 46 points. which kept the Lakers unbeaten on the road (10-0) with a 108-115 win over their former Cleveland Cavaliers team.

The triumph of Los Angeles (14-4), The best record in the league, it occurred on the eve of the first anniversary of the tragic death of Lakers legend, Kobe Bryant, in a helicopter accident, in which his 13-year-old daughter, Gianna, and others were killed. seven more people while traveling to play a college game in California.

In addition, James was also able to remember with more than 2,000 spectators, who witnessed the game at the Rocket Mortgage FieldHouse, in Cleveland, where he had not played for two years, the league title won in 2016, the first and only in Cavaliers history, when the field was named after Quicken Loans.

Point guard Delon Wright scored 28 points as the leader of the Detroit Pistons attack who beat the Philadelphia Sixers 119-104 and broke a losing streak of four consecutive games, giving the surprise of the day.

The eaves Tobias Harris led Philadelphia with 25 points, But the 76ers (12-6) never hit a big streak after the Pistons controlled the start and snapped a three-game winning streak, though they remain leaders in the Eastern Conference.

Nothing stops the good moment of the game of guard Jaylen Brown, who contributed 26 points, as leader of the Boston Celtics who remained winners by beating the Chicago Bulls on visitors 103-119, in the return of their power forward star Jayson Tatum, who also had 24 points.

German center Daniel Theis scored 19 points and point guard Marcus Smart added 13 points, while he tied a career-high with 11 assists, which left him with a double-double and the Celtics with the second consecutive victory and a 10-6 record for third place in the Eastern Conference.

Guard James Harden and forward Kevin Durant scored 20 points each after playing their best offensive game in the fourth quarter and the Nets defeated the Miami Heat 98-85.

Guard Kyrie Irving, who came out wearing a tribute jersey in memory of the late Bryant before the game, contributed other 16 points, eight rebounds and four assists with the Nets, who completed a two-game sweep over Miami.

Irving hit the sand with a number 8 shirt of Kobe bryant of Lakers. In a video posted by the Nets, he opened his jacket for a full view of the jersey and said, “You know who I’m rooting for tonight. Come on, it’s obvious.”

The Nets were scheduled to play the New York Knicks on January 26, 2020, hours after the helicopter crash that killed Bryant. Irving left the arena, too distraught to play after the death of his friend and mentor.

The Magic once again had the support of Swiss Montenegrin center Nikola Vucevic, who contributed a double-double (28 points, 12 rebounds and 7 assists) -thirteenth of the season-, and He helped the Charlotte Hornets win 117-108.

The game also featured the referees Natalie Sago and Jenna Schroeder, who worked in the same game for the first time in NBA history.

Schroeder and Sago, the fourth and fifth referees hired to be part of the group that works in the 2020-21 regular season games, accompanied veteran referee Sean Wright in the game played at the Amway Center in Orlando.

Canadian escort Shai Gilgeous-Alexan He maintained his status as a new franchise player for the Oklahoma City Thunder with 24 points, leading the balanced attack that led to a 122-125 road win over the Portland Trail Blazers.

The point guard Malcolm Brogdon recovered his scoring inspiration and with 36 points, the best mark of his career, he was in charge of leading the attack of the Indiana Pacers that came up in the last quarter to beat the Toronto Raptors 129-114.

The combination of point guard Stephen Curry and the Canadian forward Andrew Wiggins, with 36 and 23 points, respectively, they became nightmares for the defense of the Minnesota Timberwolves who lost 130-108 to the Golden State, Warriors who avoided losing for the first time three games in a row.

Power forward Michael Porter Jr scored 30 points and the Denver Nuggets recovered from the expulsion of Canadian point guard Jamal Murray for a blow between the legs to the shooting guard. Tim Hardaway Jr. of the Dallas Mavericks and beat them at home 113-117.