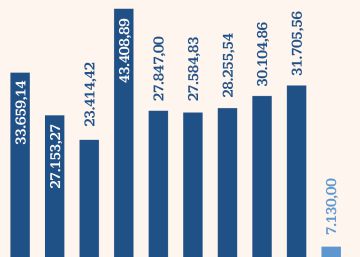 The dividend yield above 4% is one of the hallmarks of the Spanish Stock Market. However, that performance has been undermined by the Covid-19 pandemic that is going to cause a historic plunge in dividends this year. Until July, Spanish listed companies paid 7,131 million euros to their shareholders, which represents a drop of 68% compared to the figures disbursed a year earlier and which reached 22,607 million euros, according to data provided by BME. If this rate of decline continues for the remainder of the year, the year could end with an amount distributed in dividends of around 15,000 million, which would mean returning to 2004 levels.

“Preserving liquidity in the consumer crisis caused by Covid-19 and strengthening company balance sheets” have been the two main reasons that have led companies to suspend, cut and / or delay dividend payments, he explains Pablo García, director of Divacons.

The global figure for 2020 will be very far from the more than 31,000 million euros that Spanish listed companies gave their shareholders in 2019, which was the second consecutive year in which they paid more than 30,000 million and the fourth that this was exceeded figure.

During the second quarter of the year, some companies decided to suspend their payments. Inditex chose to cancel its traditional May dividend, although it maintains that of November, although it will be lower than last year. Meliá, IAG, Amadeus together with banks are just some of those that canceled their coupons in recent months. Atresmedia and Mediaset, securities with a high dividend yield, have been the last to announce it and will be, for at least one year, without distributing dividends.

Even so, Juan José Fernández-Figares, Link Securities analysis director, explains that “there may be companies that now see that their businesses are doing better than expected and that they resume, even if only in a limited way, the payment of the dividend.” However, the expert adds that, “in general, the year is going to be weak in terms of dividend distribution except in the case of securities that operate in businesses where demand is very inelastic and that, therefore, they notice in to a lesser extent crises ”.

The rest, especially the companies most linked to the cycle, have given priority to maintaining as much as possible the solvency of their balance sheets against the distribution of dividends. By sectors, the worst part is taken by banks due to the ECB’s recommendation to suspend distributions. This sector is joined by hotels, airlines or the automobile industry that have significantly suspended or cut dividends.

The forecasts made by Janus Henderson’s experts for the entire year at a global level are not as negative as those they had last May. Even so, it forecasts a 19% drop in dividends in 2020 in underlying terms, equivalent to a 17% decline overall, with a best-case total of $ 1.18 trillion.

In the worst case scenario, Janus Henderson expects a cut in underlying terms of 25.0%, which is equivalent to a decrease in the general rate of 23.0%. This would result in total global payments of $ 1.10 trillion (€ 1.01 trillion). 2020 will be the worst year at least since the global financial crisis according to their forecasts. Ben Lofthouse, manager member of Janus Henderson’s Global Equity Income team, explains that “much of the damage was done in the first half, and companies have started paying dividends again now, even in some of the financial sectors.”

The expert considers that the most important fact that will determine by itself the magnitude of the recovery of the European dividends in 2021 is the opinion of the regulator on the payments of the next year. Precisely on Friday, it became known that European regulators are studying the possibility of lifting the current ban on banks paying dividends in early 2021, according to sources cited by Bloomberg.

Several members of the supervisory board of the European Central Bank, who initially supported the initial requests that the sector suspend these payments, would now be considering that prolonging the situation would be more harmful than beneficial.

Dividends and stocks fall. The dividend yield of the Ibex 35 estimated for 2020 is 3.3% compared to 4.8% in 2019 and 4.4% expected in 2021, according to FactSet consensus data provided by Link Securities. And is that the cancellation and cut of the coupons of many listed companies have lowered their dividend yield. Even so, in the selective there are securities with high dividend yields. 12 of the securities that are part of the Ibex have a higher dividend yield than the same. Repsol (13.4%) and Telefónica (10.9%) stand out. Both reward the loyalty of their shareholders via scrip dividend.

Defensive. Among the highest, Enagás and Naturgy also stand out, with 8.2% and 7.9% respectively, which are typical of the top positions in this ranking. At the bottom were Siemens Gamesa and Cellnex, with less than 0.2%. IAG, Amadeus and Meliá have fallen to this place due to the cancellation of their payments. In the case of IAG, its 2019 dividend yield was 14% and is currently at 0.3%.