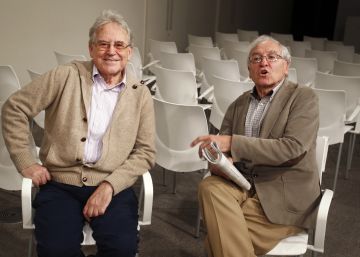 He was the best. Sorry to be so blunt. My closeness to him and the immediacy of emotions before his death should advise me to contain my judgments. But I will justify what I have said. It's not just that I knew countless data, that I knew them, about contemporary Spain. It was that he had a guiding idea, a well-constructed explanatory scheme, that underlined and gave coherence to all his work. If I am able to synthesize it, that idea was that the construction of a functioning State is an essential requirement for the modernization and democratization of a society. Perhaps he never exposed it so clearly and I fear that if he heard me he would rectify or clarify me a lot, but that I think is the common denominator, the idea force, of all his work.

Santos Juliá it was the opposite of the media intellectual, of the talkative talkative, that to attract attention is radicalized today to the right and tomorrow to the left. Nor did it respond to the model of our grandparents, those of the Silver Age, enviable writers, teachers of metaphors, jugglers of ideas, obsessed with the "Spanish problem", champions of proposals of impossible practical application. He was not even faithful to the anti-Franco culture, always waiting for the revolution, although its content and the subjects called to carry it out have changed over the years.

I don't think he betrays his intellectual position if I say that his starting point was the defense of complexity in the explanation of the past. Human events are never simple, in all conflicts and characters there are lights and shadows, it is necessary to flee like the devil of manichaeism and simplifications and, even more, of intentional deformations in the service of a cause. What has nothing to do with defending, aseptically, that the responsibility for crimes or disasters falls equally to all the protagonists.

Because it was not all intellectual balance, erudition or coherence in him either. There was a passionate civic commitment. He clearly defended democracy as a principle of political legitimacy in the modern world; a democracy based not on the popular charism, but on a system of norms and institutions, of freedoms and rights, of balances and controls between powers. That is why he was so interested in the figure of Manuel Azana, with whom he identified, perhaps in excess. Because Azana not only had exceptional lucidity and wrote exquisitely, which fascinated and will always fascinate those who approach her work, but also believed in democracy, in that institutional democracy defended by Santos. Although Azana was a politician who lacked, he observed, a party structure that relied too much on his word as the only weapon.

Unbearably independent, Santos Juliá had no loyalty other than her own principles, her intellectual honesty, which she never betrayed. That is why the relationship with him was not easy, because he easily contradicted, even naturally, even his closest ones. One thing was friendship and another to pamper frivolities, to play with ideas that contradicted advances previously made in the interpretation of the past.

Santos Juliá began its historical investigations analyzing the critical situation experienced by the PSOE-UGT in 1934, when the Caballerist left actually divided the movement into two. That division of the socialists, axis and hegemonic force of republicanism, was, according to him, one of the most serious problems of the Republic and conditioned the course of the Civil War.

His interest then expanded towards the Second Republic as a whole. That was a democratic experiment, the first authentic in the country's history, installed overnight in a mostly rural society and lacking a strong middle class, but in the previous thirty years had taken a huge leap and developed a Secularized and modern urban culture, oblivious to clerical and caciquil controls. The Republic was not premature or casual, as its failure was not inevitable. But the reform program launched by the Republicans was perhaps too ambitious, considering the weak state apparatus they had to put it into practice.

The Republic, in any case, Santos repeated, should be studied in itself, not as a mere prelude to the Civil War. And to understand it, it was not necessary to focus on ideologies, on speeches, on major political projects or on their supposed abstract protagonists - the people, the proletariat, the bourgeoisie - or, of course, on any racial fatalism, but on the daily struggles for power and its concrete protagonists - parties, unions, institutions, leaders. I remember well how I understood all day that I heard him explain the "delivery of weapons to the people", decided by the Republican Government in response to July 18, 1936; He didn't go to town, no, town doesn't exist; the weapons were handed over to parties and especially to unions, unions that channeled them towards their most radicalized members. Which explains what happened next: they did not serve to contain the advance of the rebels, but to undertake a ruthless "cleaning of fascists" in the rear; a series of crimes that discredited the Republic and hindered the achievement of international support.

It is not the time today, or I do not feel strong, to continue reeling your ideas. After the history of the PSOE, the Second Republic and Azana, he wrote, successively, on many other subjects: the history of Madrid, the Spanish intellectuals in the nineteenth and twentieth centuries, the debate on the two Spains, the Franco regime, the relationship between history and memory, the Transition ... Overall, it is not easy to catalog him. He did not defend any great story or belonged to any historiographic school. He preferred to analyze concrete problems, never small, for which he offered interpretations that escaped simplicity and Manichaeism: proven data, reasoned explanations and no tolerance with metaphors and fireworks. He represented, like nobody else, the Spanish historiography of democracy, the post-Franco death, marked by the crisis of Marxism, the reintroduction of the political, the renunciation of nationalist essentialisms or metaphysics, and the search for valid, generalizable models and concepts for different countries and times; Professionalism, in short. It's what your school represents today, because around you, really, one came up, and very good.

Now he has disappeared, as they disappeared before him Paco Rubio, Edward Malefakis, Carlos Seco Serrano, Javier Pradera, Manolo Pérez Ledesma, our dinner partners, discussions, sometimes trips. Friends leave, it's life. It will not impress those who did not know them closely. And those of us who do not know, or perhaps should, take our feelings outside; The only response to the death of such a close being is silence. But his death is a huge loss for public life, for all who followed his writings, for those who learned so much, we learned so much, from him. What they will do, what we will do, before any new difficult situation, before any future conflict, without their opinion, their coherence, their solidity. Some of us have lost an endearing friend. All, our compass, our strongest grip.