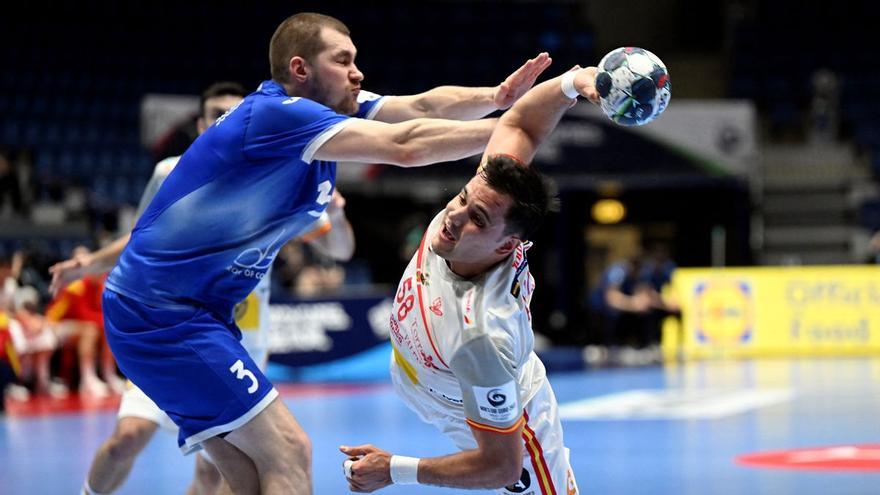 On a bad day and after a heart-stopping finish (a penalty missed by Russia with the time fulfilled), Spain has achieved this Friday in Bratislava its sixth consecutive victory in the European handball, which leaves you very close to the semifinals. The continental champion of the last two editions was weak in attack in the first half and weak in defense for much of the second, but reacted on time to cover a four-goal deficit and end up winning after Soroka will fail from 7 meters.

With 6 points in their locker and waiting for what happens this afternoon in the rest of the duels, the Hispanics have in their hands the classification for the fight for the medals, which could come on Sunday against Norway or on Tuesday against Poland, in the last clash of the main phase. Spain, in any case, has a network. The sixth consecutive pass to the semifinals is on track.

"That was the goal we came for," he said. Gonzalo Perez de Vargas about those already very close semifinals. "We are making a path without fail, but everyone still has options and we have to fight until the end. We know that with one point we can be in semis, but now it's time to rest, analyze today's game and think about Norway tomorrow", analyzed the goalkeeper, who brushed the last and decisive shot just right. "Winning like this also helps to continue growing as a team", has added.

That Russia was going to stand up was clear from the start. The goalkeeper Victor Kirev He put on the hero costume and resolved the first two clear counterattacks that the Hispanics had in the game. Still in the first half there would be a third, and a saved penalty, and two other not easy stops that made a Spain doubt in attack that he did not know how to exploit the extremes and that he was infected by the rhythm of his rival.

On the other hand, Russia profited from its counterattack and its counterattack. Every attack-defense change was an ordeal for the team of jordi rivera, which took time to adjust that situation. He achieved it as he glimpsed the break. The defense finally managed to stop Russia and two consecutive actions of Chema Marquez they gave Spain the first advantage of two (10-12) in the entire game shortly before going to the locker room (11-12).

As soon as the Hispanics sharpened their aim in attack, everything suggested that the sixth consecutive victory in the tournament would fall under its own weight, but Russia insisted that it not be so. The Hispanic defense began to fail and Corrales, at a high level in the first half, stopped stopping. Russia, who had only scored 11 goals in the first half hour, scored 8 in the first 10 minutes of the second half, especially a Santalov (8 goals) who punished again and again to give his team a four-goal lead. that seemed almost definitive (22-18).

Pérez de Vargas and the 5-1 defense were Ribera's bets to achieve a reaction that should have been imminent. And it was. In just over a minute, Ángel Fernández, Jorge Maqueda and Aleix Gómez left the difference in one. A new game, which Spain has been cooking over a slow fire ever since. A goal from Barça's left-handed winger leveled the scoreboard 10 minutes from the end and with 5 minutes to go, the right-wing winger from Barça put the Hispanics ahead.

A good defense, a very confident Pérez de Vargas and a steal by Agustín Casado, even more crucial with that action than with his 7 goals, kept Spain ahead until the last action. With seven seconds to play, Russia had one last attack to level the game. Pérez de Vargas stopped Shishkarev's forced shot at the buzzer, but while the Hispanics celebrated the victory, the referees reviewed the action and decreed about 7 meters due to a small obstruction by Ángel Fernández. Soroka, however, crashed his shot to the woodwork after Peérez de Vargas touched just the right amount.

A very close victory for the Hispanics that leaves them very close to the semifinals and maintains their record in the tournament immaculate, in which they have prevailed in the last two editions and where they have already chained 17 games without losing (16 wins and a draw).