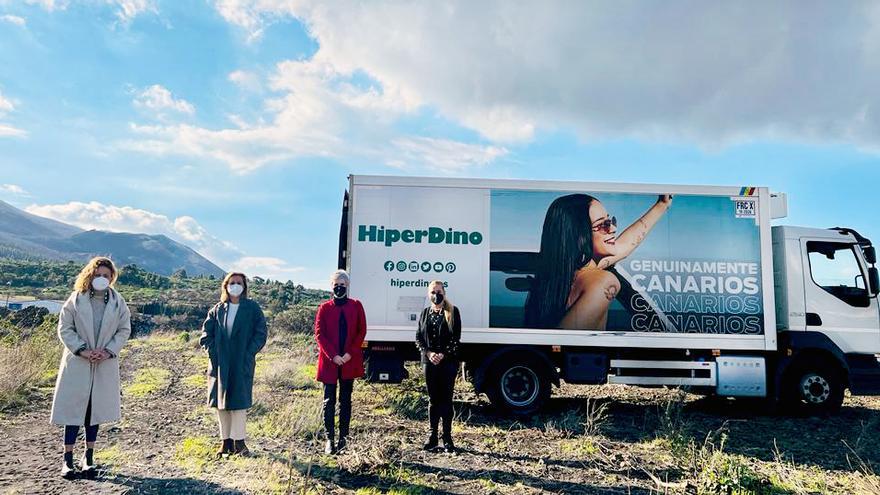 HyperDino has managed to collect 147,498 euros in donations from customers for the town councils and the people affected by the Cumbre Vieja volcano eruption. The DinoSol Foundation has served as a bridge between the company and the institutions to deliver aid, which has materialized in food, personal hygiene products, cleaning products and household items.

The director of the DinoSol Foundation, Virginia Avilaexplained that "there have been months of intense work, in which we spoke daily with the councilors of Social Services of the municipalities of El Paso, Los Llanos de Aridane and Tazacorte to listen to them and see how we could help, to reach those evicted families and that they had lost everything, including colleagues from HiperDino de La Palma”.

Virginia Avila wanted to “thank all customers for their empathy and solidarity with the situation on the Island” and added that “HiperDino and the DinoSol Foundation have been involved from the outset, donating more than 9,000 kg of food and beverages mainly to the three town halls and collaborating with the Red Cross and the Cabildo de La Palma”.

He also thanked "all those suppliers who, from different parts of the Canary Islands and the Peninsula, have trusted HiperDino and the DinoSol Foundation so that their donations, estimated at more than 20,000 kg, reached La Palma and were correctly delivered".

To all this we must add the 3,270 kg of food collected in the boxes located in the HiperDino El Paso and HiperDino el Puente stores.

From the beginning, the chain has made a transparency portal available on its website hiperdino.es, with weekly updates, in which all collections can be tracked, as well as donations made. January 9 was the last day on which the solidarity bonus was available in physical stores and on its online channel.

In total, 17,671.2 euros in food and money cards were delivered to the affected families.

Both HiperDino and the DinoSol Foundation will continue to lend their help and collaboration to the inhabitants of the Island.

HiperDino is the leading chain in the food sector in the Archipelago and the only 100% Canarian regional chain. Currently, it has 231 stores and works with more than 13,000 references, of which 40% correspond to local suppliers.

In addition, it is the leading company in the creation of jobs with more than 8,000 workers.

Present in five of the eight Canary Islands, it reaches seven of them through the hiperdino.es online store. This channel, created in 2015, has all the products from its physical stores and, among the advantages it brings, the customer receives the purchase the day after it has been made.

Through the DinoSol Foundation, it collaborates in solidarity with various actions supporting the social and cultural development of the Canary Islands, and pays special attention to the people who are part of HiperDino.

DinoSol Foundation was born in March 2017 with the aim of promoting individual, collective and family well-being, and improving the quality of life and professional training of all workers and collaborators who are part of HiperDino.

Likewise, it supports the social and cultural development of Canarian society and actively participates in solidarity activities.

Since its inception, it has carried out 264 collaborations with associations, foundations and non-profit entities in the Canary Islands, and has helped 756 people who work in the HiperDino chain.

It has launched and developed eight social programs; 29 own projects such as the Canary Islands Families Aid Program Y Food with Life; three solidarity products such as Solidarity Socks and 13 corporate campaigns, in addition to five trainings on values, with a workshop on gender violence and another on the importance of communicating in equality, for employees.

Committed to fostering education and promoting talent, it has awarded ten grants for excellence to children of HiperDino workers.

Its Volunteering is made up of more than 350 people, who have decisively participated in 69 solidarity activities and 17 volunteer activities.