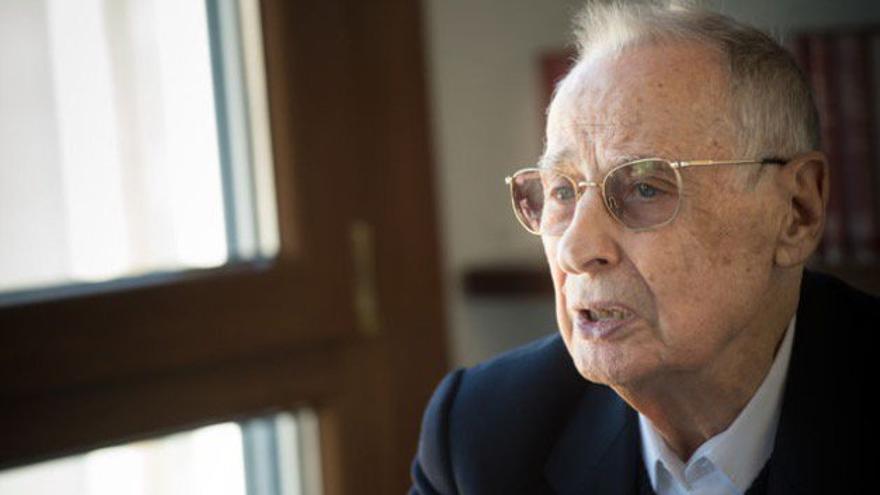 The historian and monk of Montserrat Hilari Raguer died this Thursday at the age of 92. Born in Madrid in 1928, Raguer, one of the greatest experts in Spain on the role of the Catholic Church during the Civil War and the Franco regime, leaves a legacy in the form of books, articles and publications on historical memory, spirituality, Catalanism and anti-Francoism. .

A fireproof conversationalist, with a prodigious memory even in his later years and with a great sense of humor and irony, Raguer’s religious convictions made him enter the Montserrat monastery in 1954 and ordained himself a priest in 1960. A few years earlier, while doing military service , Raguer was arrested after discovering a letter that he was going to send to the Belgian student union to prevent it from establishing relations with the Francoist student union. He spent seven months in prison in Montjuic, which helped him discover his religious vocation, although he ultimately avoided the court martial.

He combined monastic life with his studies, graduating first in Law at the University of Barcelona and later in Political Science at the Sorbonne in Paris. In France he began to investigate political Christianity during the Civil War and in particular on Unió Democràtica and one of its leaders, Manuel Carrasco i Formiguera, representatives of Catholic republicanism and Catalanism and doubly persecuted, first for their religion and later for their loyalty to the Second Republic and the Generalitat.

The investigations would culminate in the thesis ‘La Unió Democràtica de Catalunya i el seu temps’ (1931-39), not published until 1976, being one of the first theses defended in Catalan after the dictatorship. In addition to Carrasco and Formiguera, another character who focused his interest was General Batet, to whom he dedicated the books’ Divendres de passió. Vida i mort de Manuel Carrasco i Formiguera ‘(1984),’ El general Batet ‘(1994) or’ Carrasco i Formiguera. A Christian Nationalist ‘(1890-1938) (2002).

A regular in the Vatican archives, Raguer also investigated the role of the Church in the Civil War. Critical of the official line of the Catholic hierarchy, he defended without ambiguity that the Church should apologize for its support for the rebels and opposed the beatification campaign promoted by the Episcopal Conference. “The Church has not assumed responsibility for its silence in the face of Franco’s repression” Raguer defended in an interview with elDiario.es in 2017.

For this monk and historian, the religious persecution of the Civil War did not occur because of the Catholic status of the priests, but because they were part of an institution, the Church, which traditionally identified with the rights and was closely linked to the rich and the powerful. Her main work in this chapter is ‘Gunpowder and incense’ (2001). One of his latest discoveries was the attempt by the Vatican Secretary of State Cardinal Pacelli, later Pope Pius XII, to prevent the publication of the collective letter of the bishops endorsing Franco in 1937.

Openly pro-independence on the political level –which earned him reproaches from the ecclesiastical hierarchy–, Raguer was part of the board of the Memorial Democràtic de la Generalitat and of the commission of experts on the future of the Valley of the Fallen that the government created de Zapatero in 2011. He also received the Creu de Sant Jordi in 2014 and the medal of honor from the University of Barcelona in 2016.

A supporter of going beyond the mere withdrawal of Franco from the Valley of the Fallen, which finally took place last year, he did not hide his disappointment with the members – Miguel Herrero de Miñón, Feliciano Barrios and Pedro González-Trevijano – who took votes individuals against the proposal to remove the dictator from the temple, considering that they had broken the pact between the experts after assignments from both sides.

Raguer’s biography would be incomplete if his exile from Montserrat at the beginning of this century were not remembered after internally denouncing the homosexual practices of some monks. After a few months in exile in the monastery of El Miracle, near Solsona, he returned to the mountains.

The death of Raguer joins the recent deaths of Pere Casaldàgia and the ‘pare’ Manel, three very different and exceptional Catalan priests, representatives of an open Church and therefore sometimes confronted with the hierarchy. The funeral mass for Raguer will be celebrated this Saturday in Montserrat and will be presided over by Father Abbot Josep M. Soler.