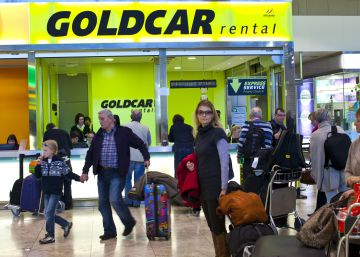 The sector of rent a car foresees a good summer after the opening of the borders to tourism and the implementation of the digital green certificate, although without yet reaching the figures for 2019. However, the associations warn of the problem of car shortages due to the lack of semiconductors or chips, which is causing production stoppages in factories throughout the world.

“The sector of the rent a car is one of the main buyers of new vehicle manufacturers, so the delays in production that many of them are experiencing will inevitably affect us “, says the president of Aneval [que agrupa a Avis, Enterprise, Europcar, Hertz y Sixt], Tobias Zisik. According to the consulting firm AlixPartners, this situation will cost manufacturers a production of about 3.9 million vehicles this year.

Zisik also asks for caution because reservations are made less in advance than normal given the “uncertainty” still generated by the Covid-19. “We are optimistic and we are on the ramp of recovery, but there is still a long way to go and we think that the prepandemic data will not return until 2023,” he emphasizes.

However, if lower availability of vehicles and higher demand are added as economic activity recovers, the result is leading to a strong one-off increase in prices in the rent a car market, which is already being noticed throughout the world. country. In the Balearic Islands, this situation has caused companies in the sector to raise their rates by up to 300%. There are firms that charge on average between 130 and 175 euros per day, when in a normal situation it would be below 50 euros and even up to 30.

According Bloomberg, rental car rates in Spain rose 143% at the end of May compared to 2019. Take the example of Europcar: 880 euros for a Volkswagen Polo during the last week of July in Palma de Mallorca.

However, Zisik shows that national tourism “is not enough to raise the numbers” of the sector (total demand), since a good part of its income comes from the international market. “His recovery is going to be slower and below what we would like for this year. An example is the delay of the United Kingdom in placing Spain on the list of countries ”with little risk of Covid, points out the also general director of Europcar Mobility Spain.

“Each company has its pricing policies, completely independent, and follows its strategies in this regard. However, and given the market situation in which it is estimated to have less fleet for the summer, it could be expected that such a circumstance would have an impact on vehicle rental prices ”, he points out.

Along the same lines, the president of the National Federation of Vehicle Rental with and without a driver (Feneval), Juan Luis Barahona, encourages customers to make reservations as soon as possible due to the “uncertain future” and strong price fluctuations.

“We expect a better summer than 2020 and a gradual normalization of demand from October, but the data will not come close to those of 2019; maybe we’ll stay at 40% or 50%. This, added to the lack of rental cars due to the semiconductor crisis, predicts an uncertain future. For this reason, we recommend making reservations as far in advance as possible ”, he insists.

The sector’s revenues fell 73% in 2020, with a turnover of just 480 million euros, according to the DBK Sector Observatory of Informa (a Cesce subsidiary). In addition to mobility restrictions and the lack of national and international tourists, it was also affected by the decline in corporate business, as meetings prevailed. on-line and remote work, and limiting events with physical presence.

In this context, companies have been forced to reinforce the offers for companies with subscriptions that work in a similar way to streaming video or music platforms: the car rental user pays a monthly fee, has everything included and does not he is bound to be tied to a permanence.

One of the oldest demands in the sector is the equalization of VAT between car rental and other tourist activities. The rental companies pay a general system of 21%, compared to the 10% VAT that is borne by hotels and restaurants.

In addition, companies in the sector face annual expenses of around 2,000 million euros due to the environmental labeling of the DGT, due to the cost of the stickers themselves and because their cars are left idle for two days on average until they receive them. Rent a car has a great weight in the Spanish economy, impacting more than 60 sectors, contributing 4,672 million to GDP (0.4% of the total) and generating more than 25,500 jobs only in the case of the five companies that make up Aneval.

In the Spanish market, the rental channel managed to moderate its decline in May to 8.7% compared to the fifth month two years ago, with 31,100 registered vehicles, thanks to the end of the state of alarm, the progressive increase in the rate of vaccination, the recovery of mobility between regions and tourism and the forecasts for the summer season.