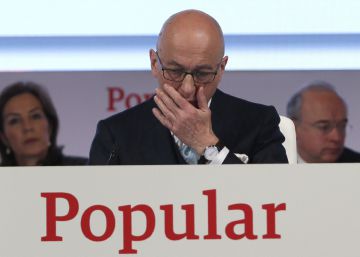 Roberto Higuera, one of the most veteran executives of Banco Popular with a relationship of almost five decades, has declared before the judge of the National Court that the accounts in the capital increase of 2016 reflected the faithful image of the entity. The former Chairman of the Audit Committee and vice president of the bank, has affirmed that the proof of his confidence in the accounting of the entity is that he lost a million euros in shares when the bank went bankrupt on June 7, 2017, since he did not sell the titles even when he left office, months before the entity disappeared.

With this approach, Higuera supports the management of former president Angel Ron, with whom he worked closely for many years. He has denied the main accusations made at the Hearing by the last president of the bank, Emilio Saracho, and he said that "it makes no sense to say that the 2016 extension should have been 8,000 million instead of 2,500 million", as it was finally done, according to legal sources presented in the declaration. In his opinion, no supervisor, regulator or auditor criticized the expansion for its small amount. The former vice president said that all the authorities considered them adequate for the Popular to recover its capital and solvency ratios.

During the interrogation, Higuera has revealed that the relevant event of April 3, 2017, in which the bank's losses increased, was the trigger for the fall of the entity due to the loss of confidence that caused the markets, shareholders and customers He has described it as "" an accomplished fact "that was presented to the council when the CNMV had already been informed and that it did not have sufficient materiality or relevance to be a restatement of accounts. This restatement made the losses amount to 3,611 million euros of 2016, an additional 550 million.

It has also contradicted Saracho's claim that appraisals of real estate assets were inflated. In Higuera's opinion, the proof that they were adjusted to the market value is that in 2015 and 2016 they sold properties for a combined value of 4,000 million, with capital gains. "It is silly to say that losses were covered up with appraisals," he said, according to the sources cited.

In the four and a half hours of the statement, Higuera responded to the judge, the prosecutor and his defense lawyer, Carlos Aguilar. On the accounts of the bank and its control, special responsibility of the audit commission chaired by Higueras, the manager recalled that they not only had conversations with PwC, their external auditor, but also requested contrast reports from KPMG, Deloitte and EY on the balance sheets individual and consolidated. Never, he said, these firms objected to the bank's accounts.

Finally, it has also been considered "absurd" to say that the shares of the capital increase were paid with loans from the Popular because they were oversubscribed by 133% and the operation was 100% guaranteed by the investment banks and the insurance company Allianz.