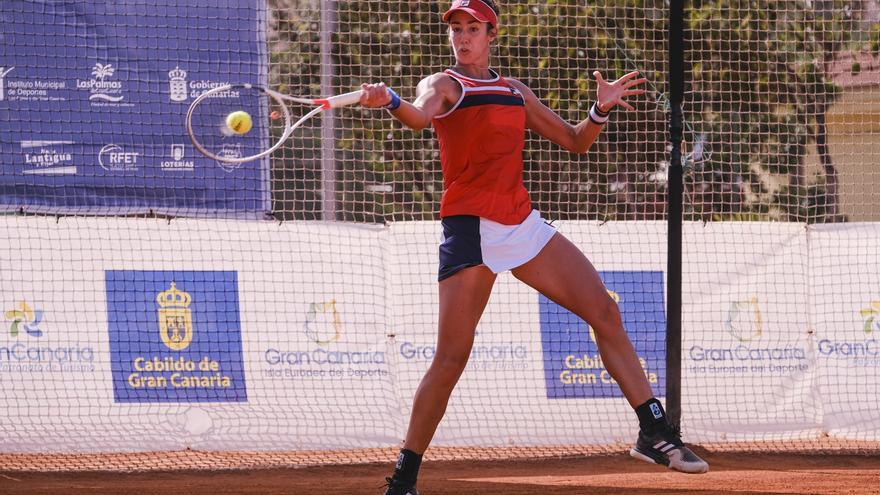 The game has started at the Open Gran Canaria club nosolotenis with the first 17 matches of the ITF World Tennis Tour Disa Gran Canaria 2020 of the qualifying table of this first event. In total there will be three days of knockout rounds from the previous draw, which began today Sunday with the first day of the best professional tennis event of this moment. Today, the test has had the participation of players of more than a dozen different nationalities, in their fight for the six places in the main draw that will begin on Wednesday.

With all the security measures and health protocols against Covid-19, the first day of this tournament, scoring for the world circuit and for the ranking WTA, Women’s Tennis Association, has started at 10.15 am with a day of women’s tennis of the best level, and a highly coveted move to the next round.

The first of the day’s meetings welcomed the young woman from Gran Canaria Elena Rey, who debuted today in a tournament of this level for the first time at the Open Gran Canaria club nosolotenis against the Dutch Gabriella mujan. A pity the defeat of the local player against the veteran of Mujan, which eliminated the only islander from this round, who fell honorably in her first international tournament.

The Alicante Lucia Cortez she prevailed in a tight 10-8 super tie break, in an exciting match in which the Spanish managed to overcome the first set against the British Alicia barnett, ending the match in a 4-6 / 6-1 / 10-8 for the national player. The Balearic player also won her pass to the second round Yvonne Cavalle-Reimers, habitual in these ITF tournaments in Gran Canaria, winner of six individual titles and a score of doubles in the ITF circuit, and who closed the score with a solvent 6-1 / 6-2 in her favor

The Madrid player was not so lucky Maria Gutierrez Carrasco, who fell by the wayside when finally falling in a super tie break against the Dutch Eva Vedder, with a result 8-6 / 6-2 / 10-7 for a very close match that fell into the hands of Vedder.

Forceful the game of the Slovak Sofia Milatova in front of the Spanish Julia Payola to which he did not give respite with a hard double 6-2 without room for failure.

The young player also fell on this first day of the ITF Disa Gran Canaria Maria Berlanga, who came out of the qualifying table after their defeat against Serbia Mihaela djakovic. The Malaga player succumbed in a tight super tie break against her rival, who with a solid game was able to eliminate the Andalusian, 2019 junior Spanish champion.

Very disputed the face to face of Spanish players Ane Mintegi del Olmo against Angela Fita to three sets, with a long match very close, which seeded the show in the facilities of Lomo de Los Frailes finally on the side of Fita with a 6-3 / 4-6 / 10-4.

The duel between the German Fabienne Gettwart against the Venezuelan Andrea Gamiz, and china Adithya Karunaratne against the italian Valentina gaggini.

This international tournament, with registered players from more than thirty countries who opt for $ 25,000 Y $ 15,000 In prizes of each tournament, it has had the strictest security, prevention and disinfection protocol against Covid-19. The measures include the use of a mandatory mask approved and distributed by the organization, constant disinfection of spaces and elements, access control and capacity, declaration of responsibility, thermal control and differentiated spaces for each group.

In this sense, it stands out that all the players who participate in both tests have had to present a negative Covid-19 test prior to access, and a separate and differentiated space has been made available to all of them from all the rest of the staff of the event.

The Tournaments ITF World Tennis Tour Disa Gran Canaria 2020 and ITF World Tennis Tour Disa Las Palmas de Gran Canaria 2020 are sponsored by Cabildo of Gran Canaria, through its Insular Institute of Sports and from Gran Canaria Tourist Board, of the City Council of Las Palmas de Gran Canaria through the Municipal Institute of Sports, Department of Employment, Tourism @LPAvisit, Mobility, Economic Promotion Y Sea City Y Department of Equality, just like him Canary Islands Government. The Canarian company DISA It is once again the official sponsor for the third consecutive year, together with the co-sponsors CC Alisios, Aguas de Teror, Smurfit Kappa, Hospital Perpetuo Socorro Y Lantigua Brothers and Sons and the backing of the Royal Spanish Tennis Federation, State Lotteries and Gambling and the Gran Canaria Tennis Federation.

Sergi Roberto tests positive for coronavirus and is isolated