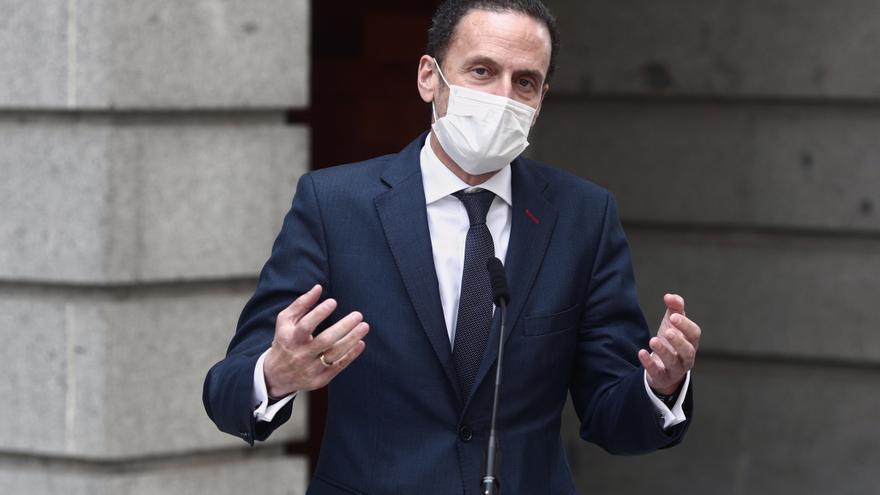 The spokesman in Congress and now also an organic Citizen, Edmundo Bal, has not hesitated this Thursday in harshly criticizing both the PP and the former secretary of Organization of his own formation, Fran Hervías, who last Saturday signed for Pablo’s party Married after leaving the militancy and his act of senator. In his opinion, it has already been shown that there is “an offensive” and “an orchestrated campaign” to “try to destroy them.” “Hervías has shown little loyalty to our values ​​and little commitment to this party,” he said. He stressed that “an image is already known to be worth a thousand words”, alluding to the photo published by El Español in which Hervías appears in a central Madrid cafeteria along with the two senators who have left Ciudadanos –Emilio Argüeso, who has been filed, and Ruth Goñi– and the also resigned deputy for Alicante, Marta Martín. Bal has highlighted that the new deputy who will replace Martín, Juan Ignacio López-Bas, who was already a deputy in the last legislature and is a lawyer like him, “shares the values ​​of Cs”, for which he has welcomed him.

López-Bas himself wrote shortly after on his Twitter profile that it was “an honor” to be part of the Citizens group.

Bal has been quick to point out that he is convinced that “after all these sad episodes are over, we will come out stronger. They will not be able to end the Spanish political center in any way.”

The group’s spokesperson gave a press conference in Congress after the meeting that Inés Arrimadas and he have held with the deputies of his group, now decimated to only eight after Martín’s departure, with which he assures that “he has not there has been no negotiation or compromise “for him to stay.

The day before his partner Pablo Cambronero, deputy for Seville, also announced that he was leaving the party but he did not leave the record and went to the Mixed Group, a decision that has earned him harsh reproaches from Bal. “Going and keeping the record is not having dignity,” he has sentenced, while encouraging other disgruntled charges to follow in his footsteps. “Who does not believe this is not in the right party and it is better that he leave as soon as possible.” “We are many more who believe in the moderate center,” he said.

In his speech he has also criticized Teodoro García Egea for having traveled to Murcia to be in the vote on the frustrated motion of censure against the regional president, Fernando López Miras, presented by Ciudadanos and the PSOE. “The general secretary of the PP is in Murcia but I do not know why he has gone, unless it is only to celebrate the triumph of corruption”, criticized Bal.

The leader of Ciudadanos has come up against the accusations made by Senator Ruth Goñi, who has left the party saying that “they are the turncoats”, the party itself, for “having changed ideology.” “You have to have a very tough face to say that we are the defectors, very tough,” regretted Bal, who recalled that it was precisely Citizens who have promoted and requested a new meeting of the Anti-Transfuguism Pact, despite knowing that it does not have ” legal value, only political value “and they cannot be penalized for their behavior. Bal has said that “it would not hurt” if the electoral law included changes in this regard.

He has also rejected that Arrimadas closed a pact with the PSOE after the 10N elections. “Where is this that Arrimadas said he would never support the PSOE?”, He asked, recalling that the party leader made Pedro Sánchez “an offer with the route of 221 seats.” “He offered them to help him and that the populists of Podemos did not rule. Whoever says otherwise is making it up, making excuses to justify their decisions.”

The Citizens’ spokesman has insisted that they are “the political center”, a “clean and liberal” party, and has been firm: “They will not be able to end the Spanish political center in any way”, revealing that he writes to them a lot of people these days. “I am left with the message of one of these people, who says that he is convinced that we are on the right path and that is why he is going to vote for us. We are not going to move from here,” Bal has settled.