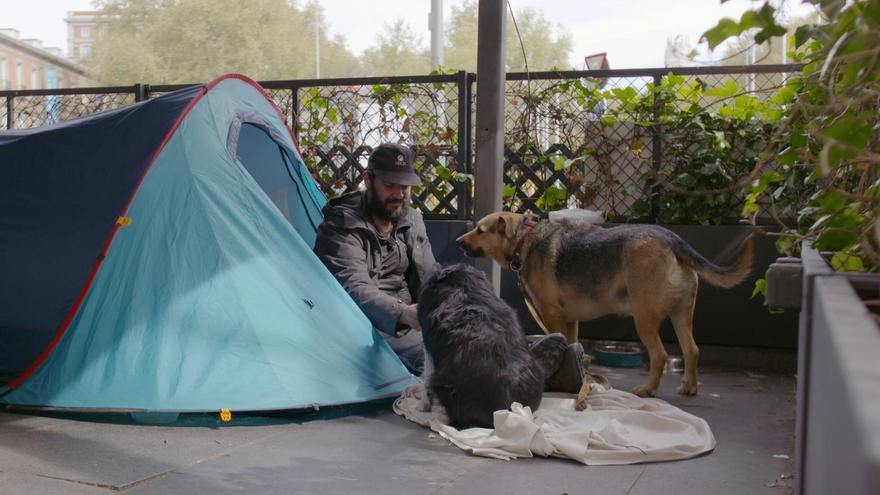 In March of this year, director Hernán Zin (Buenos Aires, 1971) grabbed his camera and, for the first time, he did not work alone but with a team of twelve people to document the state of alarm in Madrid for 60 days. , one of the cities most affected by Covid-19 in the world. Hospitals, ambulances, nursing homes, morgues, funeral homes, cemeteries, the Ifema temporary hospital, ICUs, police checkpoints and the soulless streets of Madrid are some of the scenarios that frame the film 2020, released in theaters this Friday. “We have a unique testimony of the first wave,” says Zin, who using his “mischief” and experience in conflict zones managed to film where almost no one could.

In this documentary feature film, Hernán Zin’s objective is in charge of putting soul to the figures that aseptically filled headlines and news reports during the first wave of the pandemic. Zin delves into the weakened heart of Madrid’s public health system to publicize how its health and sanitary facilities were – and are – coping with the global collapse that, to this day, Covid continues to cause. It also shows the vulnerability, uncertainty and pain of people with coronavirus, their family members, homeless people and the working class – undertakers, firefighters, policemen, animal protectors – who put names and surnames, words and feelings to the dystopia that we still inhabit.

Hernán Zin has twenty years of professional experience, he has covered wars, he has been working in more than 80 countries and he has directed several documentaries related to warfare: Die to tellr (2018), Born in Syria (2017), Born in Gaza (2014), The war on women (2013), among them, but ensures that 2020 “It has been the hardest job I have ever done in my life. Much harder than in Somalia, Afghanistan or the Congo. We had ‘no’ as a premise, they have kicked me out of many places,” recalls the director, who to enter Several places availed themselves of Article 20 of the Constitution, the right to freedom of expression and information.

“In June, I had the film almost closed because I wanted people to see it now; we knew about the second wave. But no television station wanted it, they all said no. So I continued recording. No station wanted to bet on this content and I am very sorry because I think it could have been very useful at that time and that it can be very useful now in the second wave, “criticizes the Italian-Argentine filmmaker with frustration.

“Our work is fundamental. We must humanize, if we do not tiptoe and we will not be able to make a collective duel. We are a mature society that has enough capacity to look horror in the face and say: it is what there is and it is what What has happened. Why put on makeup? Why hide it? It’s a tragedy, you have to look into her eyes, “says Zin, who believes that this catastrophic situation is a warning that manifests itself in all parts of the world and various ways: “The planet defends itself against us and sends us these calls for attention.”

The abstraction before the camera of the people who appear in 2020 makes this feature film a documentary where its protagonists are not aware of the objective. They seem to forget that lens that points and records them; because they do not try to interpret more than the wave that is coming over them, a “tsunami in slow motion”, as Zin refers to the apocalyptic frame that he filmed.

“They began to say ‘Stay at home’. Stay at home? But in which house do I stay, where am I going to isolate myself, what is going to happen to me – Enrique Gasch asks himself in front of Zin’s camera. My survival depends of contact with people “. Enrique and his two dogs live in a tent in the center of the capital where they spent the confinement.

An emptied, mute Madrid. A silence that contrasts with the sound of hospital machines that cling to life to infected people. “Artificial respiration, mechanical ventilation, does not cure anything, it is a support method, measures to try to overcome the disease”, confesses Maribel Real, doctor at the Hospital 12 de Octubre.

Another of the film’s protagonists, the doctor Gabriel Heras, became infected and had to isolate himself and stop going to work at the Torrejón Hospital although he was “looking forward to coming back.” Gabriel, from his confinement, reflected: “we are being blind, I believe that in 20 years of profession, in the history of medicine, so many things have never been done without any type of scientific or experimental evidence”. The vocation of health professionals beats in each frame of the 94 minutes of footage. “Take advantage and rest, then war comes,” Gabriel encourages a colleague from the hospital who, like him, also contracted the coronavirus.

These are some dramatic scenes from the crisis that reflect 2020 and that, on its own merits, is positioned as one of the candidates for the Goya 2021 Awards in the category of best documentary film. However, its director claims to be “a outsider, I do not have a lobby. I’ve always been or doing kitesurf or with my camera lost in Africa “, comments Hernán Zin from the office of Doc Land, his independent production company.” I am a guy with a camera that gives voice to ordinary people (…) my little contribution is to amplify their voice It’s what I get to, it’s very little, but it’s people’s emotions “.