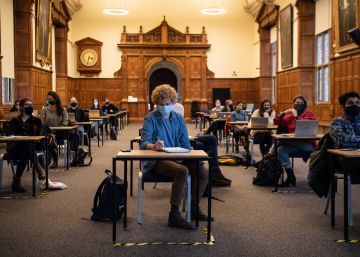 Going to London “to find a life”, to work and learn English for a few months, like so many other young people over the years, was no longer possible last January with the consummation of the much feared Brexit. Without free movement of people and workers, studying and working in the UK is now a somewhat more bureaucratic process requiring in most cases the issuance of a visa prior to travel, but which should never be an insurmountable obstacle if we inform ourselves in advance. “The new migration scheme in the United Kingdom based on points allows EU citizens to apply for a visa electronically and the process is relatively agile, between three and four weeks,” explains Claudia Ágreda, lawyer specialist in Immigration and Aliens.

This requirement, however, is not necessary in all cases, since European Union citizens who want to travel for tourism or study in the United Kingdom may do so without a visa as long as the stay does not exceed six months. If the purpose is to work or complete a longer academic program, it will be necessary. It should be borne in mind that Spain is the fourth country in the EU that sends the most university students to the United Kingdom, only behind Italy, France and Germany: according to the British Agency for University Statistics (HESA), 13,725 Spaniards studied undergraduate and graduate programs or participated in long-term exchanges such as Erasmus in the 2019-2020 academic year.

What do I need to know to study in the UK?

The requirements to study a degree or postgraduate degree have not changed, beyond the need to apply for a visa after having been accepted in a certain academic program: possess an adequate level of English and have a sufficient mark in Baccalaureate, A levels or other pre-university training. Although it may vary depending on the career and university, in general terms, “Spaniards who want to access a degree must have completed the Baccalaureate (with or without EvAU) and present their academic record, a motivation letter, another recommendation and, in some cases, a portfolio (mainly for art careers ”, says Carolina Jiménez, head of Higher Education at the British Council in Spain. In the event that you want to take a master’s degree, it will be necessary to accredit the degree of the degree.

In most cases, if the university accepts the student and offers him a place, it will send him a letter to request the visa. It is called Confirmation of Acceptance of Studies (CAS), and usually reflects the student’s level of English. “In case the letter from the university does not include an explicit mention about the level of English, this must generally accredit a B2 through exams IELTS, LanguageCert, Pearson and PSI Service ”, adds Jiménez. Certifications from institutions such as Cambridge are equally valid, and for careers related to the health sector (doctors, nurses or midwives) it is necessary take out the OET.

The process to apply for the visa is relatively quick and simple, since it is done online and you only need a passport with a fingerprint, access to a mobile app, UK Immigration: ID Check, and the invitation letter from your university, as well as the original academic and English certificates. Can be requested up to six months before of the trip (it is recommended to do it with at least a month or month and a half of margin), and has a cost of 348 pounds (about 400 euros). There is also the possibility of paying an extra fee for the visa to be processed on a priority basis.

Writing a good motivation letter is essential when it comes to making the best possible impression in the selection process for the degree or postgraduate degree of our interest. For this reason, the British Council experts provide a series of tips that should be taken into account:

The reasons for experiencing British academic life are numerous. From the international recognition of its institutions and the benefits of developing in an international environment, to the methodology used and the high rates of employability of its graduates. “In the British model there is a lower number of teaching hours and a greater tutoring and work dynamics through projects that follow the methodology of learning by doing (learning by doing). In general, the protagonism of activities in which the critical thinking of the students is promoted, in which they develop and argue their ideas predominates, ”says Jiménez. In 2019, the employment rate of British graduates was 87.5%, according to government data, and year after year, Anglo-Saxon universities maintain a privileged position in prestigious rankings educational such as Times Higher Education: “38% of the Nobel laureates who studied outside their countries and one in four world leaders has studied in the United Kingdom,” he points out.

When choosing, it is important to make sure that we meet the requirements of the university, that it has the necessary academic and social means, that the faculty is well recognized, the employability of the career, the experiences of alumni and Of course, the price of the courses (the cheapest are around 9,000 pounds (10,000 euros) a year, while the most expensive can exceed 25,000 pounds per year). A task in which the guide recently published by the British Council may be useful, Study UK, which also includes information on different types of Scholarships and grants. It is also possible to combine studies with a part-time job, up to a maximum of 20 hours a week, to get funds to help cover expenses.

On the other hand, Europeans residing in the United Kingdom before December 30, 2020 can access local rates (a maximum of 9,250 pounds per year), provided that they request, before June 21, resident status (settled status, for those who have been in the country for more than five years) or as a pre-resident (pre-settled status, if they are less than five).

The British university system has an offer of 45,000 degrees, most of them three years and 180 credits, although of course there are also 240 credits or more. There are degrees that contemplate a sandwich year (one year of paid work inside or outside the country), two-year programs called Foundation and one-year college courses (foundation access programs) for those students whose Baccalaureate grades are not sufficient or who, having taken a Literature option, finally opt for a Science degree (or vice versa). “They are usually done specifically for very demanding careers or for foreigners who want to prepare their English and some other subject,” illustrates Jiménez.

Most applications (up to a maximum of five) are submitted through UCAS. Beyond specific cases (such as the universities of Oxford and Cambridge and the studies of Medicine, Veterinary Medicine and Orthodontics, whose limit is October 15), there are different deadlines: the first, until January 15; the second; from April to June 30, and the third (called Clearing, which awards the remaining places), between the end of August and the beginning of September. When it comes to postgraduate studies, most universities manage their own applications, and although there are not always deadlines, submitting them in advance increases the chances of being accepted. To check the equivalence of the qualifications of the country of origin with those of the United Kingdom, you can access the National Recognition Information Center.

Work in the UK

Brexit has substantially changed the rules of the game, and it is vitally important to know what requirements and procedures we must comply with before traveling to the United Kingdom for work reasons. In the first place, “to have a job offer approved by the corresponding authorities (not just anyone is valid); You must demonstrate that you have the appropriate qualification and level of English (at least a B1); earn more than 25,600 pounds per year and pay the corresponding fees, which depending on the circumstances can be between 469 and 1,220 pounds ”, Claudia Ágreda illustrates. In some cases, such as experts who attend for less than a month to give lectures, lawyers who participate in legal proceedings or artists or athletes who are going to participate in certain events, obtaining a visa is not necessary.

“There are also visas for investors, entrepreneurs, religious, volunteers and researchers,” adds Ágreda. “Precisely for the latter, a job offer will not be necessary, since what is intended with this visa (Global Talent Visa) it is attracting talent for sectors such as science, humanities, engineering or digital technology ”.