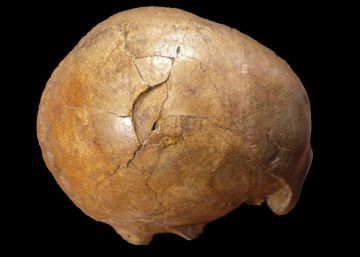 It is served cold, or hot, and it is revenge, patient evil. Juan Carlos Onetti he draws it in Hell so feared. A woman who takes revenge at a distance from a violent and violent heartbreak destroys the deceased. A Spanish novelist, Manuel Ríos Sanmartín (1965), has gone to the Atapuerca deposits to search there (for his novel The footprint of evil, Planet) the physical origin of evil.

The evil is us. It has been done with history. It mixes with other feelings to hide its fog. To the editor and writer Julian Rodriguez his father told him (and he picked it up in A cheap vacation in the misery of others) that art that has the evil to hide and excel: “The mixture of sincerity and lies always results in a lie; the mixture of strength and weakness, always weakness, and that of goodness and evil, always evil. ”

In Atapuerca and other sites in the world there is a trace of the violence of man against man. It is the expression of the struggle for territory, there is no cruelty. "It is not evil." José María Bermúdez de Castro, who works in the famous Burgos site, remember that chimpanzees are already violent. And in the most rancid antiquity there was the cannibalism that, for example, tells Rudolf Hess that passed, before his eyes, in Auschwitch. Are we made of evil? Is it revenge? "Neither geneticists would say it is a gene that lives with the human species."

Doing as much damage as possible, free of charge, just for the joy of harming, is evil. The rules disappear in war, and that evil goes in there, that cruelty, which in fossils found in Atapuerca or elsewhere is not noticed. There are more wars to survive. Hess was cured of the horror he organized by going to play in the garden with his children. That is evil. Manuel Ríos sees man as a being who wants to survive; "When the struggle becomes collective, as in the case of the Nazis, it becomes evil, capable of destroying an entire town, as happened also in the case of Hutus and Tutsis." He and his children were scared of the stories of cannibalism observed in Atapuerca. Hence his fiction was born. The story is made of reality. “But in Atapuerca there are also stories of empathy. There is something good also in our origin. ”

“All human vices,” says Fernando Savater, “come from the fear of death. We look for handles: power, money, sex, and we are willing to do anything because we believe that we play our lives with it. ” And the saints? “Those we call saints act as if they were immortal. The others act too conscious of our mortality and therefore we want to have it all now. It seems to me that all aberrations come from there. ” Of that, adds the philosopher, “and boredom. The greatest historical tragedies usually come from boredom, that people get bored, especially if they are moderately happy. ”

Violence, war, evil. The trace of evil is in us. Genesis, explains Victoria Camps, Professor of Ethics, says that evil is the disobedience of God. “The cruelty. Revenge, contempt for the other, indifference. The cruelty. Stop thinking makes us inhuman, said Hannah Arendt, and from there comes the worst harm that human beings can do. ” Seek evil with joy, that is hell so feared.

Orlando Britto Jinorio: “The center has to become a critical space that questions reality”