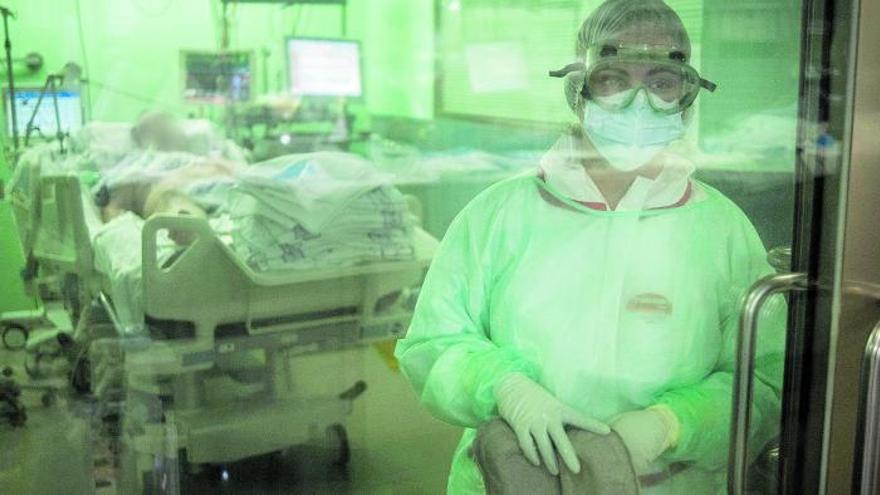 As little as five days after the diagnosis or the first symptoms, Covid-19 can cause a person to worsen their mood enough to have to be hospitalized. This window of time is the one that separates the increase in diagnoses with the increase in income.

Gran Canaria, after starting to recover from the third post-Christmas wave during the month of February, in the last two weeks has begun to experience an increase in infections. Thus, the island has been accumulating more weekly infections although in a more unstable way. Yesterday, adding 94 new cases, infections on the island grew by 13.5% compared to the previous week. This increase in recent days has had a direct impact on hospitals that, without having yet recovered from the third wave, are beginning to see new patients accumulate. In the last two days alone, healthcare pressure on the island has grown by 10.5%, or what is the same, in 13 patients. With the difference that Gran Canaria endured a significant increase in its healthcare pressure less time ago than Tenerife, such as the one that happened on February 16, with 30 patients admitted in one day. Today, the number of hospitalized patients on the island reaches 137.

In Tenerife, which has been gradually increasing its cases of coronavirus in March, it has gone from having a remnant of 140 people admitted a month ago – of the infections that had lasted from previous epidemic waves – to accumulating 228 on the day of Yesterday. During this period, the greatest increase has occurred in the last two days, in which 15 people have been hospitalized, that is, 7% more. It is also a growth that has not been recorded since the end of December, after the outbreak of the epidemic curve at the Constitution Bridge. Of those 228 people admitted, 40 are in a critical situation in the intensive care unit, this being one of the highest figures reached since confinement.

Given the situation, some of the hospitals have implemented their contingency plans which, for example, in the case of the University Hospital of the Canary Islands (HUC) translates into the limitation of visits to patients admitted to the center, as well as the expansion of beds with a respirator making use of the resuscitation service. Together with the HUC, the hospital that is suffering the most from this increase in patients is the Hospital Universitario Insular-Materno Infantil de Gran Canaria, which is currently the one with the most hospitalized patients in the entire Canary Islands, a total of 77.

This Monday both islands entered, together with Fuerteventura, at risk level 3 due to their indicators of the evolution of the epidemic. Two days later, Tenerife continues its trend to reduce infections compared to mid-March. Thus, yesterday it added 110 new cases that represent 682 per week, 7.4% less than seven days ago. The same has not happened with Gran Canaria, whose infections continue to rise. Yesterday it added 94 new cases, which is 652 per week, 13.5% more than in the previous seven days. Fuerteventura has not stopped growing either. Added to those of the last few days, the 25 new cases verified yesterday on the island represent 136 a week. It should be noted that during the third wave, Fuerteventura accumulated a weekly maximum of 141 cases, 50% more than the previous week. After the weekend, this island, which is the fastest growing, hospitalized 3 people at the same time.

Calm in the rest.

The rest of the islands remain calm regarding the advance of the coronavirus. Lanzarote, which was the one that suffered the most from the third wave, has recovered notably. However, yesterday it suffered a slight rebound after accumulating 13 new cases, and 51 during this week, 6% more than the previous one. La Palma, with a new case, accumulates 8 and consolidates its tendency to reduce cases, after an outbreak occurred in the Port of Tazacorte in the middle of the month. El Hierro and La Gomera continue without diagnosing new positives.

Yesterday the death of two people was reported in the Canary Islands, a 92-year-old woman in Tenerife and a 55-year-old man in Lanzarote. The number of deaths amounts to 652, of which 63 occurred in March.