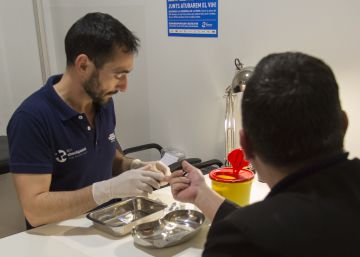 The Ministry of Health finalizes the inclusion among publicly funded drugs of the Pre-exposure Prophylaxis (PrEP), A compound taken before sexual intercourse prevents the spread of AIDS even when the couple is HIV positive. This has been announced by the secretary of the National Plan on AIDS, Julia Del Amo, to the state HIV and AIDS Coordinating entity, which has made it public through a statement.

The measure, long awaited in the sector, took its penultimate step on September 30 in the Interministerial Price Commission, which gave the green light to "the inclusion of PrEP in the public services portfolio". A health spokesman, however, recalled that "the procedure is still open because the manufacturing company now has a period of 15 days to submit claims."

Although it is not common, sometimes the manufacturer makes claims because it disagrees with the conditions (with the price, for example) approved by the Commission, which may delay the final approval.

The combination of tenofovir and emtricitabine, two antiretrovirals, to prevent the spread of HIV virus has been approved in Spain since 2016, although until now those who want to take it must buy it on their own online or at a pharmacy in a private hospital. Since 2012, the drug has obtained good results in the United States and more than 10,000 people have already received it in France, one of the first countries in the European Union to incorporate it into public health.

Ramón Espacio, president of CESIDA, has congratulated himself on the step taken by Health and has valued the work done in recent years, although he stressed that "there is still much to be done at a rate of almost 4,000 new diagnoses a year and with the UNAIDS targets for 2020 without meeting. "

Pre-exposure prophylaxis is called to “have an important role in reducing new infections in the groups most exposed to the virus,” Juan-Carlos Galán, chief of Virology of Ramón y Cajal Hospital in Madrid.

However, other experts, despite not downplaying the progress that allows PrEP, warn that it also has its risks, since it is not effective in preventing the spread of other sexually transmitted diseases and their indiscriminate use could contribute to the so-called "banalization of AIDS", in the words of Santiago Moreno, head of the infectious diseases department of the same hospital.