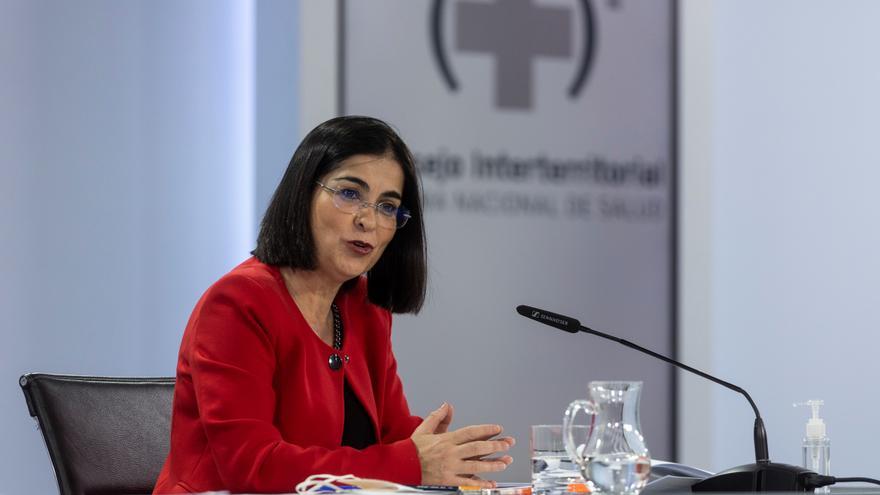 Spain takes another step towards a new phase of managing the pandemic. After lifting the quarantines for all close contacts, the Ministry of Health will stop publishing the data on infections, hospitalizations and deaths on a daily basis; and also the vaccination figures, as announced by Minister Carolina Darias after the meeting of the Interterritorial Health Council.

Spain exceeds 100,000 official deaths since the start of the pandemic

The vaccines administered will be reported weekly starting next week while the incidence and occupancy data of hospitals from the Center for the Coordination of Alerts and Emergencies (CCAES) will be published twice a week from March 14. Several communities had already stopped publishing daily statistics at the regional level and now it is extended to the national level. "The situation is on a very good path, we are making very adequate progress," Darias assessed, after almost two years of the pandemic with a very high demand for daily reports.

The cumulative incidence stands at 486 cases per 100,000 inhabitants at 14 days. Six weeks ago it reached its peak with 3,397 cases. In the last seven days, the decline has been 30%. The occupation of hospital beds has plummeted below 5% and there are currently 2.1% of ICU positions occupied by infected patients. Regarding the deceased, Darias has given the "peak" as surpassed, although "they are still high figures." There are already more than 100,000 deaths in Spain since the start of the pandemic.

More news has come out of the meeting with the directors. The antigen tests carried out in health centers will now serve to generate recovery certificates. Until now, it was only possible to obtain this certification with a positive PCR result. Spain took this proposal to the European level because it is necessary for the measure to be homogeneous.

"It has taken us time, effort and important insistence", assured the minister, who has indicated that the decision has already been published in the Official State Gazette. This change is a solution for people who have recently had COVID-19 and have not yet received the third dose of the vaccine. The recommendation is to wait at least five months after infection.

The meeting with the councilors has also set a date for the debate with the autonomous communities on the new surveillance and control strategy "after the acute phase" of the pandemic. The document, advanced by elDiario.es, is already in the hands of the councilors and will be discussed in a monographic meeting next Thursday, March 10, in Zaragoza, as announced by the minister. It contains profound changes, such as the end of mandatory isolation for those infected. The meeting will also discuss the epidemiological surveillance strategy for all diseases, a broader reform underway.

The minister has not been clear, however, about whether the meeting will definitively address the end of indoor masks, a measure that the Prime Minister, Pedro Sánchez, said would be taken "very soon". Several counselors, including that of Andalusia, have already raised this Wednesday the withdrawal in schools.

Respirators sent to Ukraine and 5,000 beds in Spain

The National Health System made up of the Ministry of Health and the communities will make 5,000 hospital beds distributed throughout the Spanish territory available to Ukrainians who are suffering from the Russian attack "in case it is necessary to bring patients". The Interterritorial Health Council has agreed to make this offer in "this time of difficulty" in "solidarity and support for the Ukrainian people."

On the other hand, the shipment by the Ministry and the Spanish Agency for Medicines and Health Products (AEMPS) of medical equipment and respirators has already been launched, which will be sent to Ukraine through the action that at the level of the European Union is coordinating the European Center for Disease Control (ECDC).