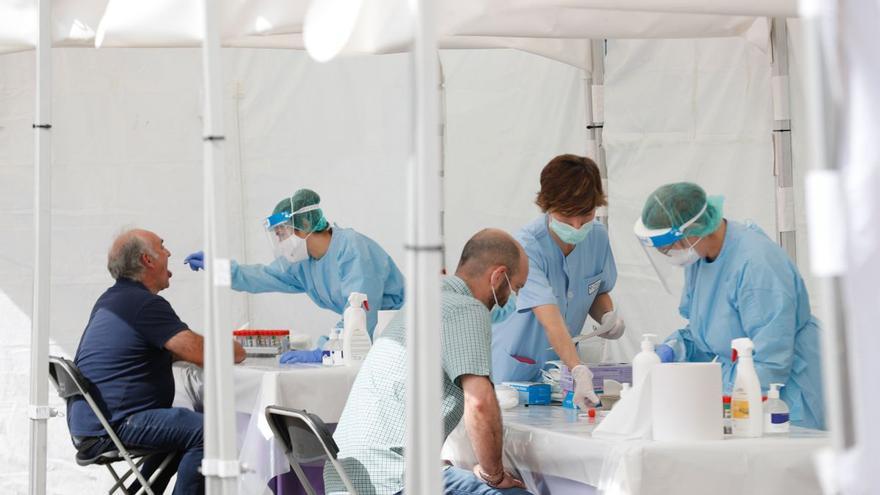 The Ministry of Health has registered 8,964 new cases of coronavirus, of which 3,168 have been diagnosed in the last day. Madrid accumulates more than a third of infections and continues to be the community with the most cases: this Tuesday adds 2,921 (984 of them between yesterday and today). In total, 534,513 test-confirmed people have been infected since March.

Regarding the deceased, the authorities have added 78 to the total balance, which raises the figure since the beginning of the pandemic to 29,594. Of them, 261 have died in the last week.

Evolution of cases, deaths, hospitalizations and those admitted to ICU accumulated during the last week

Hospital admissions continue to rise. In the last seven days, there have been 1,953 in all of Spain. The community with the most cases is Andalusia (386), followed by Madrid (363), the Valencian Community (190), the Canary Islands (163), Galicia (148), Castilla y León (146), Murcia (134) and Aragón (120 ). Euskadi, with two patients in hospitals, and the autonomous cities of Ceuta and Melilla, with three and eight respectively, are the regions with the fewest patients in hospitals.

This week, 166 people had to be treated in intensive care units throughout Spain, except in Cantabria and Euskadi. Canarias has had 37 patients in the ICU and is the community that has reported the most cases. After her, Andalusia has had 23, the Valencian Community, 22; Murcia, 18; Madrid, 14 and Galicia, 13. The rest have had less than a dozen.

The Spanish Minister of Foreign Affairs, Arancha González Laya, has announced this Tuesday that Spain is going to negotiate, once again, with the British Government and with other European countries, such as Germany and the Nordic countries, the opening of corridors for tourists to travel to the Canary Islands and the Balearic Islands without being quarantined on their return. The decision has been adopted after London has announced a new mobility strategy towards some islands, such as the Greek ones, although it has not yet taken any action on the Canary Islands and the Balearic Islands.

“The wish is to restore these tourist flows as soon as possible. It is an extremely important issue for the Canary Islands, which, unlike other Spanish territories, have a winter tourist season. The opening of corridors like the one that we are going to negotiate with England can help them to relaunch the tourist activity “, said the minister.

Also, in Madrid, one of the Primary classes of the French Lyceum is in preventive confinement after a student reported symptoms of COVID-19 after being in close contact with a positive case, as indicated by the school in a letter to parents. In the text, the school explains that it is a CP class (the preparatory course of the French educational system, with students from 6 to 7 years old, which would be equivalent to the first year of Primary in Spain).

In Castilla y León, The Minister of Health, Verónica Casado, has predicted that the capacity control measures decreed last week by the Board for the cities of Valladolid and Salamanca, will be extended for seven more days, that is, twice what was planned. Although the decision will be taken this Wednesday, with the new data, the head of Health has advanced that “it is difficult that it is not like that, although it is not certain because we still have a surprise.” Even so, he has acknowledged that he is confident that seven more days “will be enough.”

On the other hand, in Zaragoza, the town of Ejea de los Caballeros has returned to phase 2 with perimeter confinement. There, 146 cases of coronavirus were detected last week, compared to the 20 that were reported in the first week of August, the peak of the second epidemic wave in Aragon. This number of infections represents a rate of more than 800 cases per 100,000 inhabitants in the municipality, and more than 500 in the Cinco Villas region. At the moment, it is the territory of Aragon with the highest incidence, given that the incidence in the community as a whole during the last week is 270 affected per 100,000 inhabitants.

This perimeter confinement means that you can neither enter nor leave the municipality, with some labor exceptions for people who work inside or outside it, educational or in cases of first need. The Minister of Health, Sira Repollés, explained that the security forces will be in charge of controlling this confinement that “in principle, a period of one week is proposed, extendable in case of need.”

The Government of Aragon assures that most of the positives detected in the municipality of Ejea de los Caballeros are linked to community outbreaks linked to events and social gatherings, coinciding with periods of local celebrations, specifically the so-called ‘no parties’. For this reason, the order that regulates the new normal has been updated and the management holidays are suspended until December 31 in the entire community.