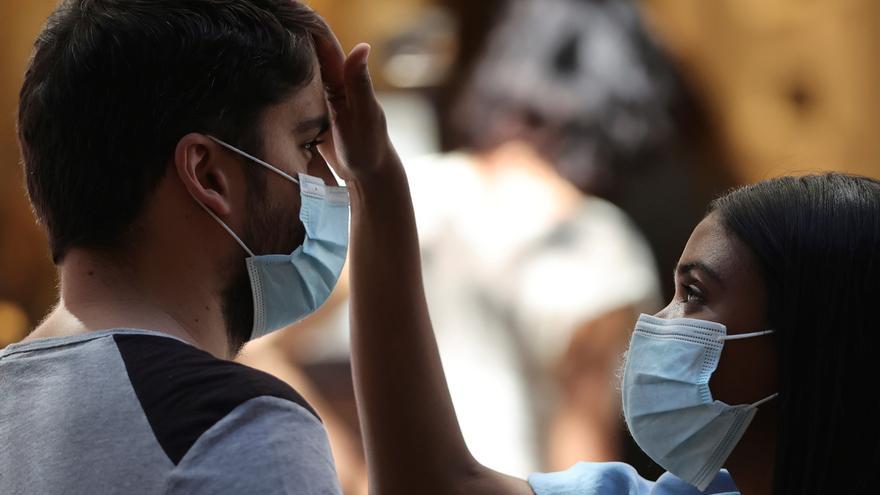 The Ministry of Health has registered 4,088 new cases of coronavirus, 1,683 diagnosed in the last day. Of the 4,088 cases, 1,102 have occurred in Catalonia; 731 in Madrid and 376 in Aragon. The Basque Country has incorporated 661 cases, but yesterday had not notified as it was a public holiday. In addition, the authorities have added one more deceased to the total balance, bringing the figure since March to 28,500. Of these, 22 have died as of the last seven days. The director of the Coordination Center for Health Alerts and Emergencies of the Ministry of Health, Fernando Simón, has reported 580 outbreaks of COVID-19, with 6,900 associated cases. Most of them, in the context of meetings with friends and family.

Since the start of the pandemic, 309,855 people confirmed by tests have been infected. Yesterday 2,943 cases were incorporated (1,792 from the previous day), not counting Euskadi and Castilla-La Mancha that did not add their data due to local festivities and technical problems, respectively. Regarding infections among health personnel, between July 29 and August 5, 611 new cases have been registered.

This Thursday we learned that the Junta de Castilla y León will confine Aranda de Duero from this Friday, August 7 due to increased outbreaks. The municipality, which exceeds 32,000 inhabitants, is in a situation of community transmission due to 16 outbreaks of COVID-19. The only pending procedure is the judicial authorization of the measure, which is expected to take place shortly given the seriousness of the situation.

The Territorial Delegation of the Board in Burgos has reported that it has gone from 5 outbreaks notified on Wednesday to 16 this Thursday. All infections are family-related and most have between three and four people affected and 46 positive people detected this Thursday and a total of 82 affected by the disease. The return to Phase 1 will have an initial duration of 14 days, a period that can be extended as the situation evolves.

From April 8, The Basque Country did not register more than 300 coronavirus positives in a single day. Specifically, the Minister of Health, Nekane Murga, has reported 338 new infections, more than 6% of the total number of tests carried out, 5,617. There are around 2,000 active cases at the moment, 10,000 people in preventive and follow-up quarantine and three hotels enabled to isolate people. The R0 -cases derived from a positive- is still determined not to drop below 1, the barrier that is considered safe.

With these figures -which have motivated a meeting of the crisis cabinet chaired by the Lehendakari, Iñigo Urkullu-, Murga already expects an increase in the healthcare pressure in Basque hospitals in “eight or ten days.” “These data show, without a doubt, that we are facing a second epidemic wave of the coronavirus,” warned the head of Health, who assured that the main points of concern are Bilbao and Barakaldo in Bizkaia and Vitoria in Álava and has warned of which are also the areas that, together with Donostia, generate greater mobility. Of the 338 cases, 233 are concentrated in Bizkaia, 126 in Bilbao and 28 in Barakaldo.

France recommends not traveling to Aragon

The situation is also worrying in Aragon. France now advises against traveling to this community due to its epidemic situation, adding to the recommendation of the French country on July 24 not to make trips to Catalonia and the restrictions to Aragon that Germany and Belgium had already imposed. The Government of Aragon demanded a rectification to these two countries due to “serious damage” to the economic interests of the community. On its website for advice to travelers, the French Ministry of Foreign Affairs indicates that it is not advisable to go to Aragon until “the situation is restored” due to “the evolution of the epidemic situation.”