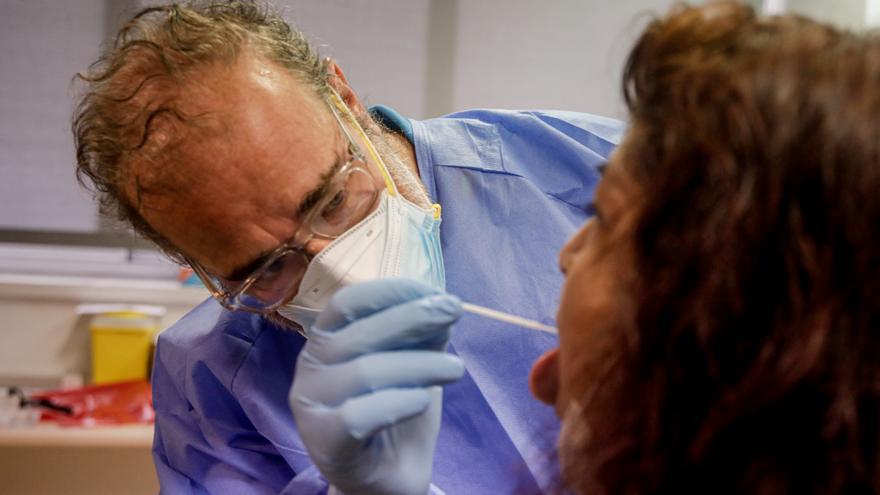 The Ministry of Health has registered 31,428 new cases of coronavirus since Friday. This is a higher figure than last week, when 27,404 were detected in the same period of time. Of the cases notified this Monday, 2,957 have occurred in the last day. The community that diagnoses continues to report is Madrid: it totals 11,991 during the weekend, of which 794 have been detected between yesterday and today. In total, since the start of the pandemic, 671,468 people confirmed by tests have been infected.

In that same period of time, one week, there have been 2,293 hospital admissions throughout Spain. 446 of them have occurred in Andalusia –the community with the most–, 296 in Madrid, 265 in Castilla y León, 248 in Aragon, 158 in Galicia, 156 in the Valencian Community, 127 in Navarra, 124 in Murcia, 113 in the Canary Islands and 109 in Extremadura. The rest have reported less than a hundred and those with the fewest cases are the autonomous cities of Ceuta and Melilla and Euskadi, with one, three and nine respectively.

The President of the Government, Pedro Sánchez, and the president of the Community of Madrid, Isabel Díaz Ayuso, have reached “an agreement”. Both have met this Monday at Puerta del Sol, headquarters of the regional government, to address the situation of the pandemic in Madrid and have agreed to create a bilateral commission that will have political and technical representatives from both administrations and that will coordinate and plan the strategy against the pandemic in the region.

The main team, which will be called ‘Grupo COVID-19’, will be made up of the Minister of Health, Salvador Illa, the Minister of Territorial Policy and Public Function, Carolina Darias, the Vice President of the Community, Ignacio Aguado, and the counselor of Health, Enrique Ruiz Escudero. This group will have a technical health spokesperson to meet the information demands of society.

In Murcia, the Regional Government Health Minister, Manuel Villegas, announced this Monday after the COVID-19 Monitoring Commission the extension of phase 1 in Lorca and Jumilla, where “after a detailed analysis of the data, a slight slowdown of the curve is observed, although they still maintain high rates”. In the case of Jumilla, of 910 infections per one hundred thousand inhabitants and in the case of Lorca, of 506, the counselor has referred.

Public Health, the head of this department has referred, has focused on the agri-food companies of the Region; especially in areas near municipalities such as Totana or Lorca, where there have been several outbreaks since the summer. “Specific screening is being done in this sector, so the incidence in these populations is increasing.”

Also, The Junta de Castilla y León has imposed the confinement of Pesquera de Duero (Valladolid) since this Tuesday and for 14 days, renewable, despite the fact that last week the court overturned this same measure because, among other things, it considered that the report presented by the board to justify the measure was “incomplete” and a cut and paste of other confinements.

On the other hand, Nightlife businessmen will protest this Wednesday about the “terrible management of the Government on the expansion of the ERTE“. They will lock themselves in their premises with their workers from seven in the afternoon, according to the federation Spain by Night in a statement. The act wants to” make visible the mistreatment “that the Government gives them. The protest will take place under the motto “Insomnia: you have taken our sleep away” and with the “closure of the staff that make up the templates: DJs, waiters, public relations, entertainers and room directors, among others”.