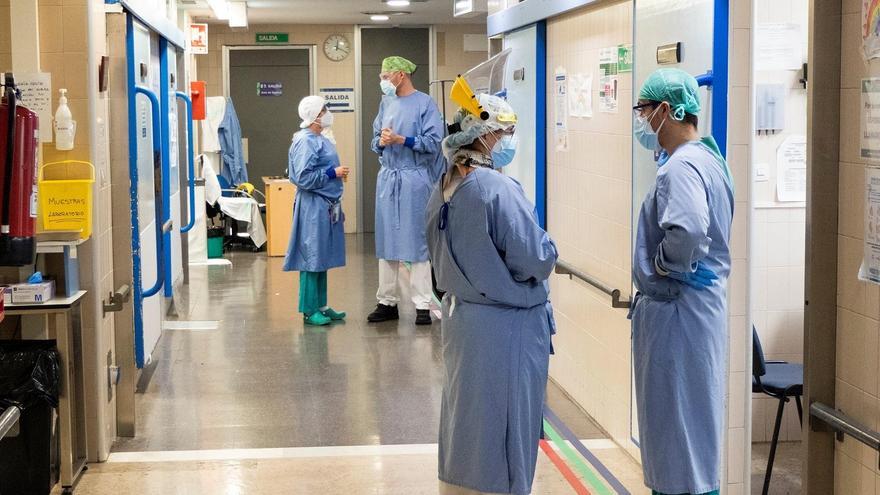 The Ministry of Health has notified 11,998 new cases of coronavirus this Tuesday, of which 4,030 have been diagnosed in the last day. The figure added to the total balance is slightly higher than the 11,325 cases on Friday, the closest day with which today’s data can be compared, since on Monday the accumulated weekend is offered. In total, since the start of the pandemic, a total of 825,410 people have been infected with COVID-19 in Spain.

The health authorities have added 261 new deaths to the total of deaths. Since March, a total of 32,486 deaths have been recorded, 484 of them in the last seven days.

In the last seven days, 2,271 people have required hospitalization in Spain, according to the balance provided by Health. The bulk of these patients is found in Madrid (475) and Castilla y León (332). In addition, 161 people have needed ICU care: 25 in Andalusia; 23 in Castilla y León; 22 in Murcia; 19 in the Canary Islands and Madrid; 13 in Galicia; while the rest of the communities are below 10.

This Tuesday, the National Court and Superior Court of Justice of Madrid have rejected Vox requests to urgently suspend the restrictions in the Community of Madrid, which concentrates most of the new infections. In the region, the capital and nine other municipalities with more than 100,000 inhabitants have remained since Friday night under the restrictions set forth in an order from the Ministry of Health and agreed with the bulk of the Health Councilors in the Interterritorial Council last week , but to which Madrid opposes.

The Minister of Health, Salvador Illa, and that of Territorial Policy, Carolina Darias, have met this Tuesday with the Vice President of the Community of Madrid, Ignacio Aguado, and with the Minister of Health, Enrique Ruiz Escudero, within the framework of the ‘ COVID-19 Group ‘, which they created two weeks ago to coordinate transmission control in the region. It is the first meeting between the parties that occurs after on Friday the Community carried out the closure of ten Madrid cities that Health decreed, despite the fact that the regional government finally opposed the restrictions. The summons to “establish a daily technical analysis mechanism” of the situation has come from it.

The measures, defended by Minister Illa, who defended on Monday at a press conference that he is not “doing politics” but working “to protect the health of citizens”, are being applied in recent days in cities of other autonomous communities with more than 100,000 inhabitants, but also in some that have less and that, therefore, are not obliged to comply with the ministerial order.

Precisely, while the autonomous government of Isabel Díaz Ayuso has appealed the measure in court and accuses the central government of attacking the PP – despite the fact that eight of the ten closed cities in the region are they have socialist mayors-, the Junta de Castilla y León, governed by the PP, has decided to abide by the measure without offering legal resistance and applying it, since Wednesday, not only where Health is in charge, as in León, but also where it could not do so due to its less than 100,000 inhabitants, as in Palencia. A decision that leaves Ayuso and Pablo Casado alone in his war against the Executive by Pedro Sánchez at the expense of the new criteria.

To the announcements of confinements that occurred yesterday, specifically from Zaragoza out of prudence before the festivities of Pilar and Huesca due to the increase in infections, those of the Junta de Andalucía have been added this Tuesday, which limits mobility in the municipality of Linares and is studying expanding it to Almodóvar del Río. In addition, the Andalusian Government has agreed to carry out mass tests in 14 locations.