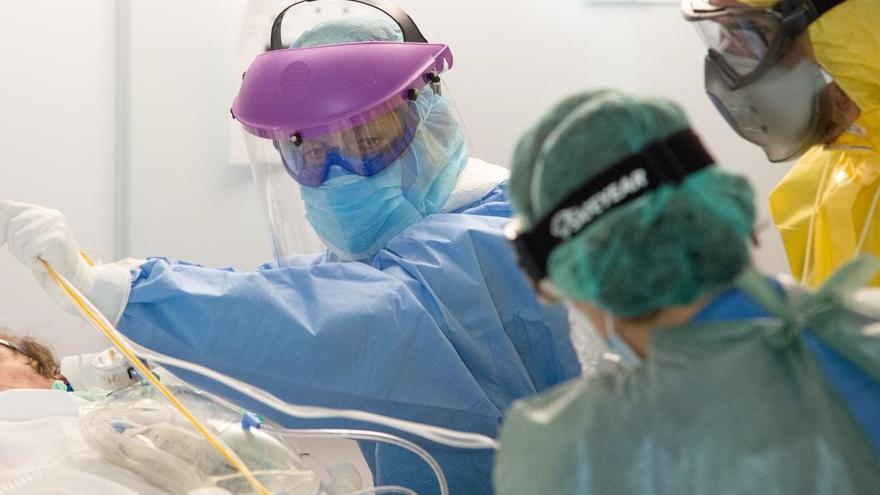 The Ministry of Health has notified 15,318 new cases of coronavirus this Wednesday. The figure represents an increase compared to 13,159 this Tuesday, when one and a half million infected in Spain since the beginning of the pandemic. In total, 1,525,341 people have been infected since March, 7,090 of them diagnosed in the last 24 hours. The cumulative incidence is 452.57 cases per 100,000 inhabitants in the last 14 days.

After yesterday marking a new maximum of deaths of the second wave, with 435 deaths, the health authorities reported this Wednesday of 351 more deaths. Since the health crisis began, 42,039 people have died in Spain, 1,346 of them in the last week.

The percentage of hospital occupancy of COVID patients is kept in records similar to those of yesterday: 15.54% in the ward and 32.04% in the ICU. In total, 180,594 people have required hospitalization since the start of the pandemic. 19,403 continue to be admitted and 4,330 have been in the last week. In the case of ICUs, the total reaches 15,153 people, of which 357 have been admitted in the last week and 3,120 continue in one of these units.

This day several autonomous communities have extended some of their measures to contain the spread of the virus. Castilla la Mancha has decided to maintain the perimeter closure of the entire region, at least, until after the Constitution Bridge, on December 7 and 8, as well as the curfew from midnight to six in the morning and the prohibition of meetings of more of six people. For its part, the Madrid Health Minister, Enrique Ruiz Escudero, has communicated that he will announce whether to close the region during the bridge next Friday and has opened the door to reduce the threshold to confine sanitary areas to 300 cases.

Aragon has chosen for maintaining the restrictions, which include the perimeter closure of the three capitals, at least until November 30. after analyzing the epidemiological evolution and detecting that, despite being favorable, it maintains a high incidence and sustainable community transmission and high levels of hospital occupancy.

On the other hand, the debate is now on the suitability or not of performing antigen tests in pharmacies. The Community of Madrid and Catalonia have requested that these tests be carried out in pharmacies, which would ease the burden on Primary Care and hospitals. Both the nursing union and the Ministry of Health, for the moment, reject this proposal that, on the other hand, violates current legislation and makes tracking and communication with Public Health difficult.

“We cannot think that a person with symptoms will go to a pharmacy and get tested,” said Fernando Simón, director of the Center for Health Emergencies, on Monday. Meanwhile, the Madrid president has sent a letter to the president of the European Commission, Ursula Von der Leyen, asking her to endorse her proposal. It is not the only open front Isabel Díaz Ayuso, whose own Government lives these days a new confrontation on account of the request of his vice president Ignacio Aguado to test all the people of Madrid before Christmas, which the ‘popular’ leaders have classified as “impossible”.

The positive note this Wednesday is left by future vaccines against the coronavirus. The Spanish Medicines Agency has authorized the first phase 3 clinical trial for Johnson & Johnson. And, a week after learning that the preliminary results of the Pfizer test gave it an efficiency of 90%, the final analyzes have raised this percentage to 95%. A couple of days ago, the American Moderna also announced 94.5% efficiency for hers.