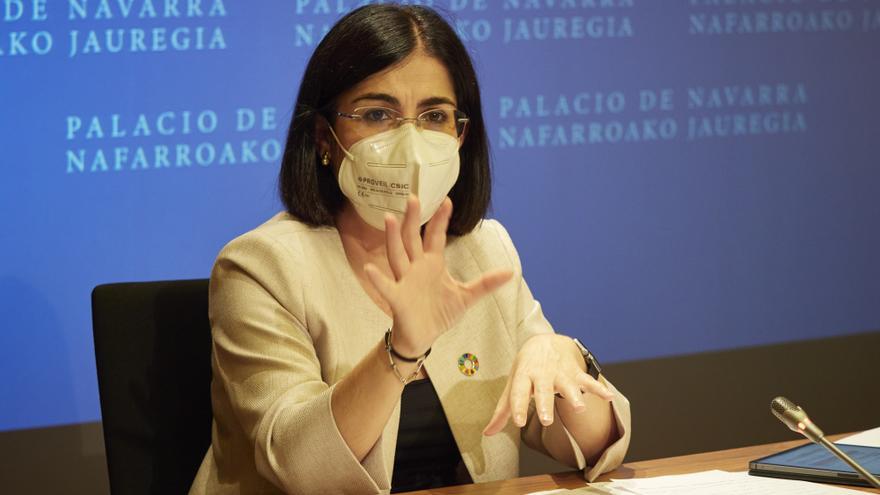 The Ministry of Health seeks new ways of consensus after several autonomous communities have refused to apply the restrictions that were approved last week with a majority but without consensus in the Interterritorial Council. The restrictions would mainly affect the rules on hospitality and the reopening of nightlife, and would be in effect until 70% of the population is immunized against COVID-19. And those new avenues could include changing part of the document published in the BOE. One of the autonomies that had opposed the agreement most forcefully, Madrid, appealed the measures before the National Court. The body has agreed with them this Monday and has granted them very precautionary measures for which the Sanitation restrictions are suspended in the region. The Minister of Health, Carolina Darias, has called after the judicial decision was made known to several health advisers of the communities, autonomous sources confirm, to study modifications. The next Interterritorial Council is held on Wednesday.

Sources from the Ministry of Health reduce the 'crisis' after the decision of the High Court and assure elDiario.es that the minister speaks "practically every day" with the regional councilors. In any case, they highlight that the Ministry is "about to find meeting spaces" and for "dialogue" to achieve two objectives: that the accumulated incidence drops to 50 cases per 100,000 inhabitants; and increase vaccination coverage. "Most of the communities are also in that spirit of reaching agreements," they explain. And they settle these same sources: "If to reach consensus you have to modify a paragraph or word, no problem on our part." The director of the Center for the Coordination of Health Alerts and Emergencies, Fernando Simón, also said at a press conference this Monday that "the entire Ministry has always tried to maintain a negotiating position when implementing and proposing measures."

The Ministry of Health moved forward last Wednesday without consensus a document of mandatory measures throughout Spain, in the format of a declaration of coordinated actions, for the hotel and nightlife industry. It was intended as a common framework to face the final stretch of the COVID-19 pandemic, until 70% of the population is immunized with vaccines. Several communities objected; those that more openly, Madrid, Euskadi and Andalusia, that already warned that they were not going to comply with it and in the case of Madrid, even to bring it to justice. The Ministry of Health had since last summer a report from the State Lawyers that assured it that the agreements of the Interterritorial Council are mandatory, even if they come out without consensus.

The schism in Euskadi

Beyond the rebellion led in the courts by the Government of Isabel Díaz Ayuso, several communities were up in arms against the restrictions approved by the Interterritorial Council, among them Andalusia, Catalonia and Galicia, whose president, Alberto Núñez Feijóo, came to raise a conflict of powers.

All these governments are of a different color from the central one, but the schism also arose in Euskadi, where the PNV governs in coalition with the Socialists. The Basque Executive also complained about the restrictions and threatened not to comply with them. Within the socialist party itself there has been conflict since the Minister of Tourism, Commerce and Consumption, Javier Hurtado, aligned himself with the Lehendakari from the beginning. The general secretary of the PSE in Guipuzcoa, Eneko Andueza, reprimanded him and demanded that Euskadi abide by the decision.

Hurtado and the vice-lehendakari, Idoia Mendia, negotiated with Health to include a PSE clause says that a contextualization clause in the order that allows maintaining the regional conditions of the hotel industry based on "the specificities that occur in the autonomous communities with respect to different aspects related to measures to combat the COVID-19 pandemic.

In a statement, the Basque Socialists assured that this resolution "preserves the coordination capacity attributed to the Government of Spain" at the same time that it recognizes "the autonomic competences in matters such as the determination of the measures that affect the operating conditions of the hotel industry. and restoration ". Basque government sources also indicate that the document allows them to take measures based on the specificity of the territory, so they were not worried about not complying with it, but they are concerned that the Interterritorial Council functions without consensus, informs Iker Rioja.

What are and who do the restrictions affect?

The declaration of actions approved on Wednesday would first oblige fixed rules for bars and food restaurants. For the territories in, according to the indicators of the so-called 'traffic light' of Health, "new normal", risk 1 and risk 2, the measures would be similar, with at most 50% of indoor capacity, with small variations between levels. It is from level 3 when the document, which refers to the 'traffic light', would stipulate that the interiors must be closed. Only Euskadi and La Rioja are currently in this risk situation 3, Madrid would be at risk 2.

The text is also a regulation for the reopening of nightlife and discos. They may open as long as the area is outside the alert levels or risk level 1, only until 3 in the morning, with only 50% capacity indoors but 100% outdoors, without being able to be standing at the bar, and at tables with a maximum of 6 inside and 10 outside. At risk level 2, it could be valued according to the trend, it would have to be favorable. On level 3 and 4, the nightlife must be closed.

Taking into account all the indicators analyzed by the 'traffic light', those that are at level 1 would be in a position to reopen the nightlife safely: Galicia, Cantabria, Navarra, Extremadura, Comunitat Valenciana, Murcia, Baleares y Canarias. If it is counted by provinces, since the 'traffic light' can be used with the territorial units that the community requires, it would be added, it would join Zamora, Salamanca, Guadalajara, Albacete, Huesca, Cádiz, Málaga and Almería. Those that surely could not be, again, Euskadi and La Rioja.