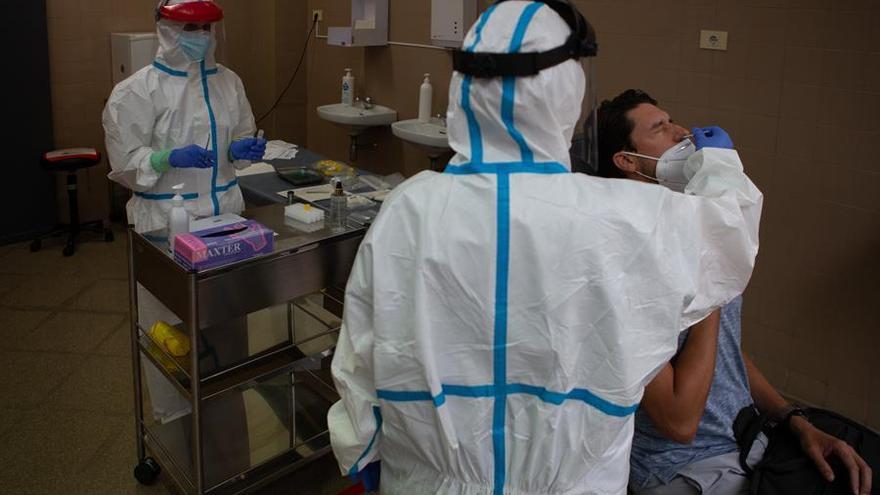 The Ministry of Health has registered 1,178 cases of coronaviruses diagnosed in the last day. From Friday to Tuesday, Madrid adds 1,773 cases, Catalonia 2,511 and Navarra 129 -this data were not added to the balance on Monday due to problems in data loading. Of the 1,178 new cases diagnosed in the last 24 hours, 365 correspond to Aragon, 292 to Madrid, 109 to Catalonia and 109 to Andalusia. Since the start of the pandemic, 302,814 people confirmed by testing have been infected.

In addition, the authorities have added 26 deaths to the total balance, bringing the figure since March to 24,498. Of these, 34 have died as of the last seven days.

Looking closely at what happens in Madrid and Barcelona, ​​it can be seen that the second seems to be setting the pace: in the week of July 30, it registered 759 cases by date of onset of symptoms and in the week of August 6, 1,604. The same ones that Madrid has scored exactly two weeks later. In the week of July 13, 726, and in the week of July 20, 1,634, according to the latest data updated by provinces of the Carlos III Health Institute. In recent weeks, in Barcelona, ​​where it has been recognized that there is community transmission, it has already registered more than 3,000 cases, and today the data points to some stabilization. In both territories, moreover, the epidemic has hit hard from the beginning, and according to the Health seroprevalence study, present a level of population with antibodies above the average: 11.4% in Madrid and 7.4% in Barcelona.

Hospitals in areas where there is more transmission of COVID-19 or where outbreaks are of concern, such as Zaragoza or the Community of Madrid, are on alert. The fear is that transmission will reach generalized vulnerable groups, which would multiply the most serious cases of the disease that require hospitalization.

He analysis of data from cases that have accumulated since May 10 carried out by the Carlos III Health Institute, which already covers numerous outbreaks, indicates that many cases are from young people or without symptoms: 25% of the 23,000 included in the study were under 30 years old and more than half were asymptomatic.

In Aragon, another of the key communities, nursing homes are back in focus. There are currently 47 residential centers with coronavirus cases and five residences for people with disabilities or other groups of people.

In seven of these centers, 75% of total infections are grouped, a situation “very different from that of March,” according to José Antonio Jimenez, Technical Secretary General. It also emphasizes that, with one exception, all the centers that have registered positives have not had any in the past months.

Fines in Andalusia to stop the pandemic

The recommendations are not enough, the obligatory sanitary regulations against Covid-19, either. The Government of Andalusia has approved this Tuesday a sanctions regime Lasted against those who breach security measures, which includes financial fines of 100 to 600,000 euros. The fork depends on whether the violation is mild, serious or very serious, depending on the number of infections caused by said violation. The decree law that regulates sanctions also includes the temporary closure of establishments, facilities or services where the offense has occurred or the prohibition to carry out the activity for a maximum period of five years.

Minor penalties range from 100 to 3,000 euros, and those violations of health regulations that cause less than 15 infections are considered. For example, not wearing the mask -which is compulsory- or wearing it incorrectly. Serious penalties range from 3,001 to 60,000 euros of fines, for those who recklessly cause between 15 and 100 infections. For example, if they do not collaborate with the Local Police or other authorities that monitor compliance with anti-Covid regulations (for example, beach guards, who can refer violations to the Police). Those who do not respect the isolation and the mandatory quarantine, decreed by the health authorities for positive or suspected cases, will also be fined; and to the entertainment venues that reopen their doors after being closed by the competent authority, and to those who do not report “cases of suspicion or diagnosis of the disease or relevant facts whose declaration is mandatory”.