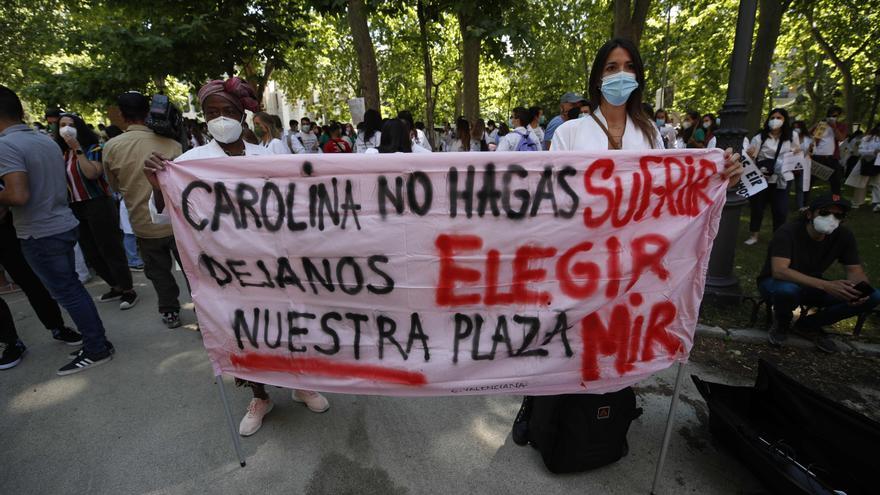 The Ministry of Health has opened this Friday to negotiate the method of choosing places for Specialized Health Training (the MIR and others like it). Until now, the intention of the portfolio directed by Carolina Darias was a remote system with no reaction capacity on the part of the candidates, who would have to prepare a prior list of preferences and wait for the system to assign them the first place. available.

The Ministry had remained firm in the previous days in the face of pressure from applicant organizations, but this Friday it launched an intermediate proposal with an award system in four days and not in one as before. According to the new proposal, each day shifts of about 2,000 people would be allocated and applicants would have up to 12 hours to change their preferences based on the positions that remain vacant.

According to a document released by the United FSE platform, which groups together Specialized Health Training and does not see the new system favorably either, it details that the new proposal gives the applicant the possibility of "doing an award simulation with the places processed and with the possibility of making changes ".

This is the first time that Health has opened to negotiate the system, after the original proposal It has unleashed numerous protests by the MIRs, which even demanded the resignation of Darias. The protest of the Resident Internal Physicians (MIR), together with their colleagues from Nursing (EIR), Pharmacy (FIR), Chemistry (QUIR), Psychology (PIR), Biology (BIR) and radiophysicists (RFIR) against this modality lies in that it has become a type of choice in which they have lost all control over their destiny for the following years.

Historically, the election was done in person and in real time. After ordering the residents based on their results in the exam, they were choosing their destination in strict direct order. Thus, when a candidate had to choose, he knew what places were available on his turn and had a few minutes to choose a destination that he knew would be awarded.

But this year - after trying and failing in the past to avoid face-to-face crowds due to the pandemic - Health has designed a telematic and automatic election. Graduates have to fill in a list in advance on a ministry's web platform with their preferences in order (specialty and center in which to do it) and, when the day comes, a computer will allocate the places by crossing the preferences of the previously prepared lists with the places available in the shift of each person without the possibility of this intervening.

This means that each person has to make a list of options as long as, at least, their shift number if they want to ensure that they are awarded a place. If they make a list with a number of possibilities less than their choice number, they run the risk that none will be available on their turn and they will be left without residence.

Although the FSE Unida platform values ​​that the Ministry has sat down to speak and has "opened the negotiations", it once again rejects the new shift system proposed because, says the statement, "to this day the platform continues to fail and, as long as there are failures, it is not a guarantee for anyone ". In addition, they consider that the modality does not offer applicants the possibility of "running a turn."

"The opponents who want to choose the family specialty will continue not knowing if they can access the health center that interests them, since the places are still offered by teaching units," they also indicate, before concluding that this new Health proposal is "a sweetened version" of last year's system, which "gave bugs and was not a guarantee."

"We continue to advocate for an election, not adjudication, in real time. For this reason, on Monday we have a second meeting with the IT technicians of the Ministry and DGOP in which the election will be raised again in real time and improvements on the web will be proposed" , deepens the statement.

The platform insists that it is "the time to make one more effort" and encourage the protesters to go to Madrid "to demonstrate unity" until the election is achieved in real time "whether telematic or mixed."