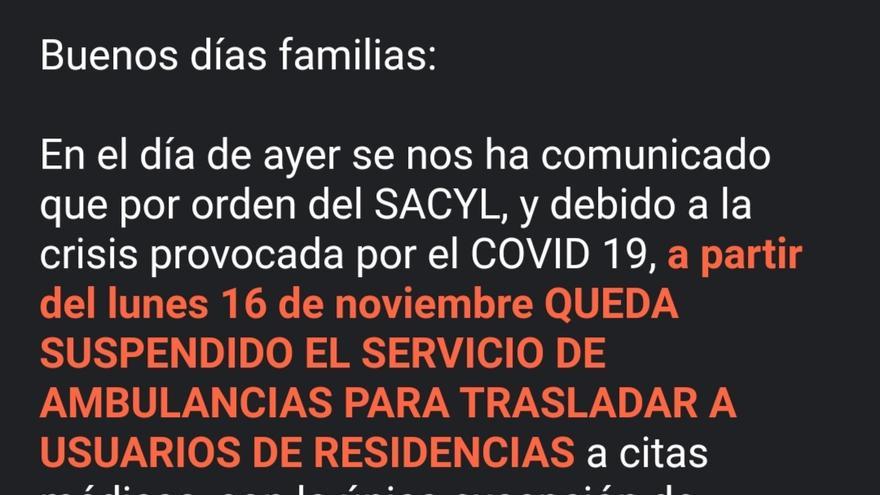 The public health service of Castilla y León (SACYL) suspends the ambulance service from next Monday to transfer the elderly from nursing homes to medical consultations, as elDiario.es has learned. The order was communicated to the social health centers last Thursday and argues as a reason the crisis caused by COVID-19. Yes, an exception is contemplated: cancer patients. The residences are already beginning to communicate the situation to the families of the users.

“Before a medical appointment, from now on it will be the family that has to manage the displacement,” a Valladolid residence warns in an email. At least one business group has filed a claim against what is considered “a reduction in the rights of vulnerable and dependent citizens.”

The Ministry of Health argues, to questions from this newspaper, that “when the demand for services overflows, in this case due to increased income, transfers, discharges, added to it the need for exhaustive cleaning by protocols, it is necessary to rationalize the means “, however, it specifies that this” rationalization “,” has nothing to do with residences, because age is not a criterion “and that” transfers will be maintained accordingly, if there is a medical cause that justifies said medical transport ” . The same sources, which do not deny Sacyl’s order, do not specify what criteria will be followed to consider what causes justify medical transport. Meanwhile, relatives of residents wonder how they can carry out the transfer of elderly people with mobility or cognitive problems, if they lack vehicles.

This decision clashes head-on with the restrictive measures imposed by the Board a few weeks ago, which the Justice revoked, and which involved totally suspending visits and exits from social health centers to avoid possible contagion of the elderly due to the epidemiological situation in Castilla y Lion.

The management of the residences in Castilla y León, Acalerte, indicates that, for the moment, it has no record of the decision made by Sacyl.