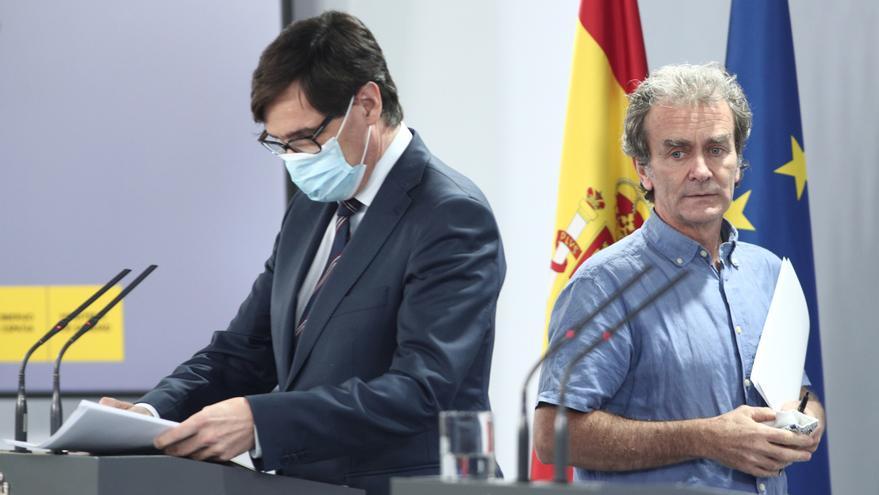 The Ministry of Health intends to approve this Thursday in an inter-territorial council with the autonomous communities the plan he presented to you on Monday to deal with outbreaks. It is a unified rapid response protocol to COVID-19, designed for a “control” scenario, which is what we find ourselves, they defend, after a spring of “mitigation.” The regional councilors could present amendments until Wednesday, and this Thursday they and Minister Salvador Illa will accept them or not. The objective is to provide a legal and epidemiological framework to act, which passes through three levels: the competences of the Communities, which have almost all of them in health; the coordination of the Ministry when a situation involves two or more regions and therefore it is necessary to make coherent decisions; and a new state of alarm, the last resort and what is sought to avoid.

The intention of the Ministry during all this time is, in addition to carrying out a daily monitoring of the infections, to carry out a weekly evaluation with each community of the “risk” of the transmission of the virus, which is not expected to be controlled until there is a vaccine That is to say, at least in a year according to the forecasts. This evaluation will take into account several values: the territorial scope of which it is spoken – it will not be the same as there are a series of infections in the same locality that are spread over several regions; the healthcare capacity that is available; the possibility of imported cases –for example, due to the tourist influx of an area–; the situations of greatest exposure – the events to be held; the population susceptible to infection and whether it is more or less vulnerable; and the prevention measures that are implemented. Based on all this, three scenarios will be considered on which to act, from least to most serious.

They are not marked by numbers of specific cases because, according to sources from the Ministry, each territory has a different idiosyncrasy that must be analyzed. The scenarios speak of the macro, of a generic response, but the Ministry also gave concrete guidelines for the micro, the specific one: the instructions to follow if the cases or transmissions that are spoken of occur in a school, work or socio-sanitary, from mass events, or between socially vulnerable populations.

While it cannot be avoided that transmission continues, the Ministry describes it as “low risk” when what occurs are sporadic, specific cases, or, in any case, cut transmission chains, that is, they do not transcend more than three people or the family, or cases do not continue to emerge for more than one incubation period. Thus, possible outbreaks and their contacts are managed and well located and the main pressure falls on the first echelon of the health system, Primary Care and epidemiological surveillance.

It is an assumed scenario and the actions are “continuous”, that is, those that are done by protocol. “Assistance capacities” must be guaranteed, the results of surveillance provided by communities must be continuously evaluated, and airports and borders must be controlled. The recommendation is the same as always: stay at home if symptoms are perceived and keep your physical distance – including measures, for example, in work spaces. In this scenario, the Ministry plans to report as before on the situation and the risk associated with, for example, travel, and to monitor the opinion of the population. So far, the latter has only been done officially through CIS surveys.

In practice and according to official data, all of Spain except the regions that have regressed to phases comparable to those of de-escalation are currently in this scenario.

In a medium risk scenario, there are no longer only sporadic cases but also groupings. And the “chains of transmission”, that is to say, infections that lead to other infections, are no longer exceptional, but there are several and some cannot be cut so early. The pressure, in this situation, already transcends Primary Care and falls more on the hospital system. The Ministry has called this circumstance “complex outbreaks” or “sporadic community transmission”.

What has to be done is summarized in a reinforcement of the containment measures and also of the communication strategy, correctly warning the population of the danger. One of the most striking measures to apply in this case is the “redistribution” of healthcare capacities and resources: for example, one way would be to build temporary hospitals, for which the communities had to demonstrate that they were prepared for de-escalation.

In these circumstances, visits to socio-health centers are limited, because they are areas of high concentration of vulnerable people, and the intrusion of the virus into them at the end of February was key in the subsequent explosion of transmission in our country. The closure of leisure venues, the recommendation to reduce the groups of friends and family with whom you have contact to less than 20 and the reduction of hours and capacity to 50% in bars and also in funeral homes are also contemplated here. The Ministry emphasizes that it is necessary to “explain the reasons” to the public, and “to promote transparency and aligned messages between institutions”, that is, not to provide contradictory information.

In practice, even without the approved plan, this scenario is the one that has been adopted to more than half of the Aragonese population that has seen its territory return to a phase comparable to 2 of de-escalation.

The situation is considered worrying and high risk when the incidence of COVID-19 begins to increase exponentially instead of linearly – the daily number doubles – and community transmission is detected. The latter happens when several cases of unknown origin are found, that is, no longer linked to an outbreak. The pressure begins to occur not only on the hospital system but on the Intensive Care Units (ICU), and there is an increase in mortality from COVID-19.

This scenario has been referred to as “uncontrolled community transmission” or “sustained with increasing pressure”. The actions that are proposed are confinement, both for specific territories and, if necessary and again, all of Spain. It is in this case, when it affects the entire country, the state of alarm would be used again. This scenario raises the need for mobility restrictions, which must be “explained” well.

“Measures aimed at reducing the mobility of people have been highly effective in controlling the transmission of SARS-CoV-2 when the virus reaches a high level of diffusion. However, it must be borne in mind that this type measures represent a high social and economic cost, so it is convenient to implement them studying the situation on a case-by-case basis, “they explain from the Ministry. That is, both the confinement and the restriction of mobility would not have to be as hard as those experienced these months ago, because each circumstance would have to be studied. It is suggested that small groups may continue to meet, for example. But events should be canceled and establishments closed.

In practice, this is what the Generalitat is already carrying out in Lleida and in various neighborhoods of L’Hospitalet where they have recognized uncontrolled community transmission.