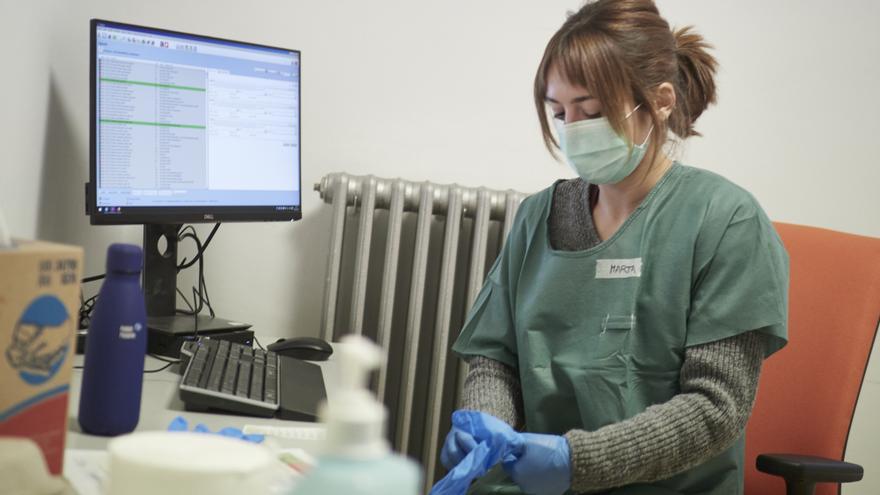 The Ministry of Health is proposing to the communities to give a second dose of the COVID-19 vaccine from Pfizer / BioNTech to all those under 60 who received the first from AstraZeneca / Oxford, according to elDiario.es. The general direction of the Ministry and the directors of the autonomous communities want to reach a decision today, in the Public Health Commission, but this afternoon’s meeting has not yet ended, sources present at the meeting report. Communities such as Madrid and Andalusia have already been openly in favor of the opposite position: giving AstraZeneca to all those under 60. There are about 2 million pending citizens, essential professionals (firefighters, police, military, firefighters) who were vaccinated with AstraZeneca between February and April 2021. The campaign with this group was suspended on April 7, after the European Medicines Agency found a link with a few hundred rare cases of thrombi on the continent. His schedule, 12 weeks between doses, had been extended to 16 weeks to allow for this decision.

This morning, the Carlos III Health Institute (ISCIII), which depends on the Ministries of Science and Health, has presented the first results of the CombiVacs study that began a month ago. The conclusion of the study is that giving a second dose of Pfizer to those who already received AstraZeneca is “highly” safe and effective: it was observed that among the group of people with whom it was experimented their IgG antibodies had increased by about 150 times more than among the group of people who had only received one dose of AstraZeneca; neutralizing antibodies, 7 times more. In addition, no serious adverse effects were found among inoculated people, most often headaches. These results have been made “available” to Public Health, but they were not decisive. The ISCIII, in the meeting of general directors, has presented its data.

Part of the scientific community has criticized that this study is too limited to draw conclusions: it has only been done among 600 participants. The cases of thrombi among those vaccinated with AstraZeneca were counted by the tens among almost 20 million citizens in Europe, so with that sample it cannot be concluded that the second dose of Pfizer has neither more nor less risk. It has also been criticized for being biased towards the Health position, because the control group, of just over 200 people, was left with a single dose of AstraZeneca, that is, the effectiveness of giving a second dose of Pfizer was not being compared with Give AstraZeneca a second. Those responsible for the ISCIII have explained, however, that this can be compared with other studies, although in this way there are “limitations” because they are carried out with a different methodology. As an example, in phase II of the AstraZeneca trials, the neutralizing antibodies increased 3 times with the second dose of their own drug, so the second dose of Pfizer would be more effective, which was 7 times in the ISCIII.

On April 7, the Ministry of Health decided with the autonomous communities to suspend the administration of AstraZeneca for children under 60 years of age, after the few cases of a very rare type of thrombus detected. The European Medicines Agency (EMA) had admitted that day that they had found a “link” between the administration of the drug and this serious ailment, but the EMA did not recommend suspending its use for any age, not even those under 60, because the benefits they far outweighed the risks. It is the same position that the representatives of the Spanish Agency for Medicines and Health Products (AEMPS), which is part of the EMA, have maintained during these weeks in the Vaccine Conference that brings together technicians from the Ministry, the communities and external, AEMPS sources have explained to this newspaper. The AEMPS is also presenting its data this afternoon at the Public Health Commission, but the body takes into account more variables, such as the availability of doses, to decide.

From Pfizer, between now and September, Spain expects to receive a minimum of 28 million doses, according to the current commitments of the European Union (EU) and the equitable distribution between countries. 13 million would arrive only during the month of June, announced President Pedro Sánchez. It is, by far, the company from which we have received the most vials. Currently, 1.3 million arrive a week, every Monday. From AstraZeneca we expect, until September, 6.5 million doses. So far, 5.7 million have arrived from this company, since February, without weekly periodicity. AstraZeneca cut its deliveries for this second quarter at the beginning of the year to half of what was initially agreed with the EU.

In the United Kingdom, given the cases of thrombi, it was decided to give those under 30 an alternative to AstraZeneca, then it was extended to all those under 40. In Germany they are inoculating those under 60 as a second dose that of Pfizer or Moderna, both of messenger RNA technology; in France the same, but only in those under 55 years of age. In all three countries they determined it in mid-April. Italy has continued to manage the second AstraZeneca without limitations.