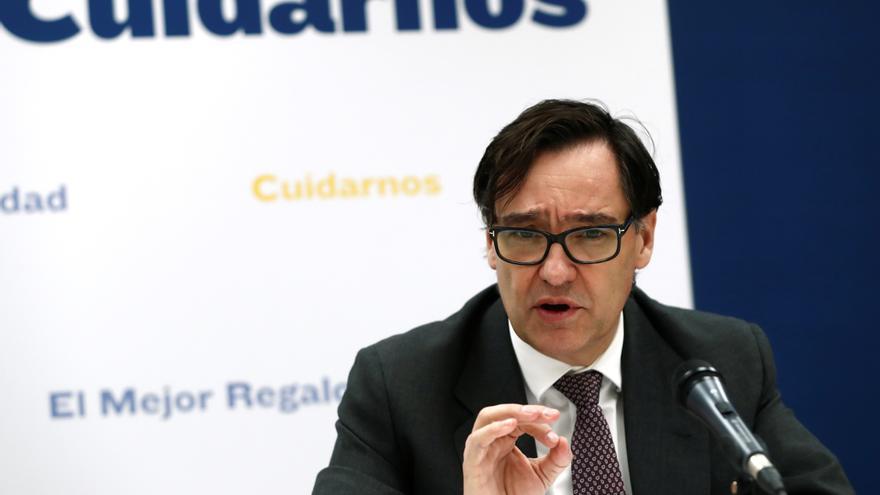 Minister Salvador Illa chaired the Interterritorial Council this Wednesday, a meeting that he holds weekly with the regional councilors of his branch. On this occasion, the main decision is that the directors have been informed that some aspects of the PCR requirement are modified for people who come by air from risk countries. Tomorrow the general director of Public Health will publish a resolution that will come into force on the same day and that indicates that TMA tests will also be valid in addition to PCR; that the results will be valid in German and French, not only in English and Spanish as before; and that those under 6 years of age are exempt, as “in many neighboring countries”. For this Wednesday’s Council, the minister has traveled, together with the Minister of Territorial Policy, Carolina Darias, to Zaragoza, with the intention of decentralizing the Madrid meeting. Three weeks ago it was in Mérida. The Interterritorial Council is also the co-governance body stipulated by the current state of alarm.

The TMA (Transcription-Mediated Amplification) test, also known as Grifols, is a molecular test equivalent to PCR, the process is very similar and is performed by some laboratories. It is equally valid, in the plan of the Ministry of early detection it is indicated that both PCR and “an equivalent molecular technique” can be used for diagnosis. The sample is nasopharyngeal, and is mixed with a reagent. The process can give results in three hours. Since on November 23, PCRs were imposed as mandatory for people who come from risk countries –Including Europeans–, to comply with the agreements of the European Union, there have been many complaints from Spaniards abroad about the difficulties involved. Above all related to the high cost, although also how complicated it is to have the accreditation 72 hours before traveling, as required, low risk of sanction, in addition to having it in English or Spanish, and that young children had to go through the same as adults.

TMA tests are not antigen tests. Health has not made any decision at this meeting about the performance of the latter in pharmacies. The minister already explained that to carry it out they would have to present a detailed plan, and the only one that has done so so far is the Community of Madrid. “We are analyzing your proposal very carefully, as I have had the opportunity to comment to the counselor,” he said, and they will proceed to make a decision “not in a hurry, but surely”. The government of Isabel Díaz Ayuso will not have an answer by letter, but Illa wants “a meeting in which the Ministry technicians record” the analysis they have made.

The minister has also referred to serological tests, which detect antibodies, that is, past infection, which are already being sold in some pharmacies in Madrid with a prescription. It is the patient himself who takes the sample at home. Regarding these, he pointed out that “the early detection strategy is validated by the Interterritorial Council.” And he has cited the statement from the Spanish Society of Infectious Diseases (SEIMC), which warned that “you have to be careful”, in the words of the minister. The statement specifically indicated that the SEIMC is also “extremely concerned that a misinterpretation of the screening tests” and that the self-diagnosis “is not reliable.” “We don’t want any more problems,” Illa has settled. “I do not anticipate anything, the technicians will have to tell us”, but the analysis must be “careful” and see well “under which protocols” it is carried out.

Last week in the Interterritorial Council the plan of measures for Christmas was agreed. This, that strategy has been reviewed and there has been a “unanimous call” from the councilors that this Christmas we citizens “stay at home.” The vaccination plan, whose logistics preparation is already underway, has also been reviewed. They have also spoken, both in the Council and in the meeting with the Government of Aragon, about the possibility of authorizing the opening of the ski slopes, a very relevant sector in the Aragonese economy and still in the air for all regions those affected by the restrictions for this sport. The regional councilor, Sira Repollés, has specified that they hope to be able to give news before December 20 and that “if the trend continues”, the anti-COVID-19 measures can be somewhat more flexible, including being able to allow that opening. Illa recalled that, although skiing is an individual and outdoor sport that in itself does not involve too much risk, some activities associated with the practice do, and therefore they continue to deliberate.

“Of course we are tired, but there is no other way,” Illa began his speech, while asking for compliance with the protection measures during Christmas, especially, celebrate them in the usual group of coexistence and at most between 10 people . “The pandemic is evolving relatively well in our country,” he stressed that we are in a cumulative incidence of 193 cases per 100,000 inhabitants and we already have all the communities below 300, and we have reached 500 nationwide. But we must not lower our guard”. Among other things because, as Darias has also pointed out, although the next vaccination gives “a horizon of hope”, “we have to reach it in the best possible conditions. That is why all the measures that have been adopted and are being adopted are important. “.