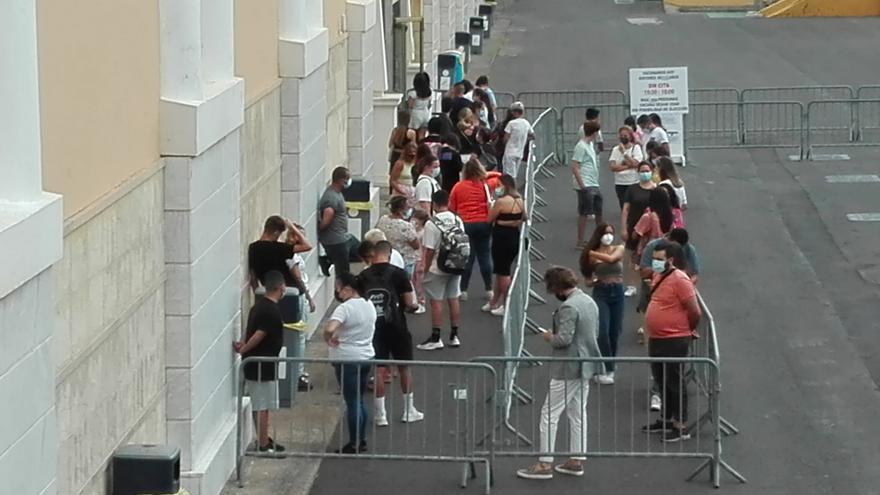 The rise of Gran Canaria to the maximum risk scale coincides, however, with a continued decrease in the number of coronavirus cases in the whole of the Archipelago, which in the last week has decreased by 23.6%. Yesterday’s day registered 478 new infections, its lowest number since July 11 -when 409 were computed-, and which also translates into 148 fewer positives compared to last Sunday, when 626 infections were reported. In the day before the latter, daily cases in the Canary Islands were close to a thousand, with 947 infections.

In this regard, the island of Tenerife, which until yesterday led the number of infections on a regional scale for more than two months, has managed to reduce its count of daily cases by more than 20% and yesterday it was below 200 cases for the first time in many weeks, with 197 new positives in one day and one death as a result of Covid-19. On the other hand, Gran Canaria surpassed Tenerife yesterday with 237 new positives in 24 hours and four deaths. Even so, the trend on the island is also downward since, a week ago, it exceeded 300 cases.

The reported death in Tenerife was of an 86-year-old woman, associated with a family outbreak; while the deaths in Gran Canaria correspond to three women aged 88, 86 and 83, the latter linked to a family outbreak, and a man aged 62. All these people suffered from previous pathologies and remained admitted to the hospital.

The total number of accumulated coronavirus cases in the Canary Islands is 85,166 and 16,018 remain active, of which 95 are admitted to the ICU and 472 remain hospitalized. This limit scenario of hospital saturation, the highest since the confinement stage, is one of the reasons why the two capital islands share the highest degree of health alert.

Thus, Health has sent to the Canarian Federation of Municipalities the table that includes the new measures in force and that requires “the closure of public spaces susceptible to crowds and holding bottles”, as indicated in the regulatory block referring to nightlife . This establishes the closure of these spaces at night, before 10 pm. The sale or consumption of alcoholic beverages on public roads, parks or outdoor recreation areas is not allowed, since controls will be strengthened to prevent the consumption of alcohol and other activities not allowed on public roads, parks and squares, being able to establish, even, the night closing of spaces in which there are agglomerations due to this cause.

Likewise, municipalities must seal children’s urban furniture and for sports use. On the other hand, the situation of the street markets is not subject to health authorization, so the municipalities must establish the maximum capacity of the markets and each of their stalls, as well as the distance requirements between stalls and the market delimitation conditions. It is recommended that the stalls have a front aisle for the circulation of customers 4.5 meters wide. And in the case of positions facing each other, the width of this road will be 6 meters. Between these there must be a minimum distance of two meters, unless they are physically separated.

However, one of the great controversies of the new regulations is the one that corresponds to the limitation of hours to services and hospitality establishments, where Health decrees the total closure between 00:00 and 6:00 for all levels of health alert in the islands, while the order 249/2021 of July 29, 2021 of the TSJC, filed by the association Hostelería Unida de Tenerife (HUT), certifies the suspension of this rule.

Despite this tangle of measures that, even so, is less restrictive with respect to the regulations imposed at the beginning of this year, their compliance is essential to contain the contagion curve in the Canary Islands and Health appeals, once again, to individual responsibility and collective to prevent the spread of the virus throughout the Archipelago. Above all, its Delta variant, the predominant one in the Canary Islands, which accounts for more than 80% of cases and is a thousand times more contagious than the original strain. In this sense, vaccination, together with the daily routine of prevention measures, are the best weapon against the spread of the virus.