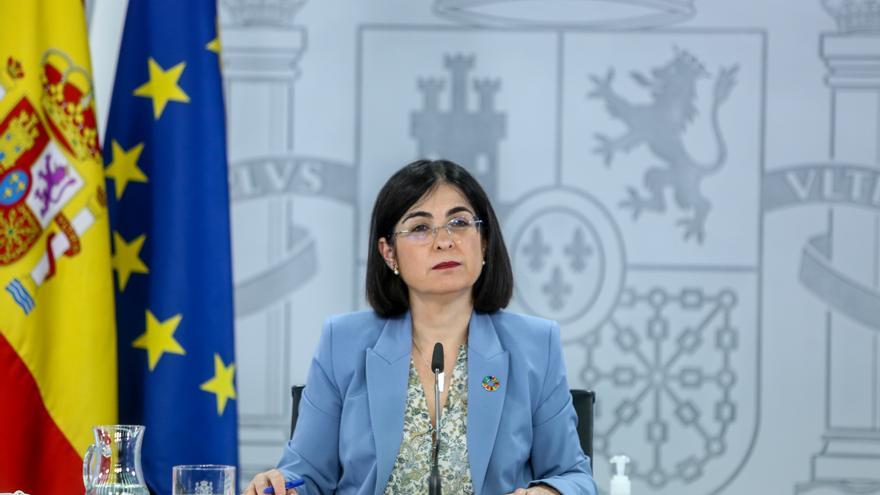 The Ministry of Health will close this afternoon with the communities conditions under which the use of the masks outdoors from next Saturday and that will be definitively approved this Thursday by the Minister council.

Because the mask can be removed if "a number of conditions" can be maintained in which there are no crowds or massive groups of people in whom the safety distance cannot be kept, according to the director of the Center for the Coordination of Health Alerts and Emergencies on Monday, Fernando Simon.

The "Report on criteria of flexibility in the use of masks" that the minister will present this Wednesday Carolina Darias to the directors is based on the proposal made by the technicians of the Ministry and the communities that make up the presentation of public health alerts, a "very restrained" proposal that proposes a progressive withdrawal of the face masks.

Without saying anything else because It will be this Wednesday when the new regulation closes, the director of the CCAES explained that, as it is a legislative change, the technicians are not the only criteria that will be taken into account in the decree approved by the Government tomorrow. "There are other factors and criteria that must be assessed when implementing it and that corresponds to other groups," said Simón.

Is about change the law 2/2021, of March 29, on urgent measures to face the crisis of the COVID-19, which regulated the mandatory use of masks on public roads, in outdoor and closed spaces for public use or open to the public, as well as in transport.

The experts of the presentation wore at least three weeks studying how to make the imposition of the mask outdoors more flexible given the favorable evolution of the epidemiological situation; Although it was scheduled to be analyzed in the Interterritorial last week, the measure was finally announced on Thursday by the President of the Government, Pedro Sanchez.

Thus arose again the unrest among a group of communities that have condemned that the royal decree has been opted for without scientific arguments behind and without being debated before in the Interterritorial.

The Andalusian, which bears the highest incidence in all of Spain with more than 170 cases per 100,000 inhabitants, plans to continue recommending its use outdoors although it is no longer mandatory; the spokesman of the Board, Elías Bendodo, asked citizens this Tuesday to gradually remove it and use it "as far as possible", especially if they are with many people.

In the same way, the Madrid counselor for the Presidency, Justice and the Interior, Enrique López, criticized that the head of the Executive advanced the news without having met with the autonomies: "It is not a good way to work on what is called co-governance, which must be based not only on co-responsibility but also on codecision," he lamented.

It is not irreversible

"We do not know at what time, or in what circumstances, or in what spaces, or with what indexes of pandemic, neither with what percentage of positive CRP, nor with what incidence at 14 and 7 days can the mask be removed; nor if it can be done in all municipalities or in all health areas, all this is unarmed ", summed up the president of the Xunta, Alberto Núñez Feijóo.

While that of the Valencian Generalitat, Ximo Puig, thought that a the best thing would be to "leave an open door" in the decree on the mandatory nature of masks in case in some area you have to use it again.

About it, Simon slipped that the measures taken during the pandemic are not irreversible and that, in any case, "if someone wants to continue wearing the mask, welcome." "The fact that you can take it off - he explained - does not mean that you have to take it off: if you feel that there are too many people around you, you calmly put on the mask and nothing happens."

"It costs nothing to carry a mask in your pocket and put it on when we suspect a risk. We are already used to it enough so that nobody is struck by it, "he settled.

Apart from this matter, the usual review of the evolution of the epidemic and the vaccination campaign or the news of the certificate covid, the meeting this Wednesday has planned agree on the action protocol for the assessment of the de facto disability situation within the recently approved euthanasia law.

And also the criteria of distribution of funds from the Health Cohesion Policy Development Program, training for medical doctors, dentists, pharmacists and nurses and health education for the population to promote the rational use of drugs.