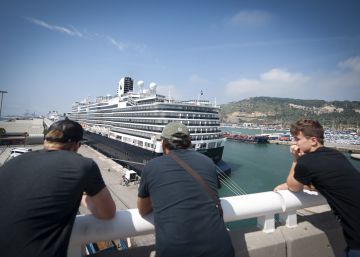 The Ministry of Health has launched an alert to 2,500 cruise passengers from 56 countries for risk of measles. The alarm was triggered because a tourist disembarked ill on June 29 in the port of Barcelona. The woman, 46 years of age and of New Zealand origin, was diagnosed with measles on July 1, two days after leaving the cruise. The Ministry of Health has launched the notice to all passengers who got off in Barcelona after verifying that the affected woman incubated the disease on the boat, so it could infect other tourists.

The woman developed the first skin eruptions on June 26, three days before disembarking in the Catalan capital, according to the part of the Coordination Center for Health Alerts and Emergencies (CCAES). When the boat landed, the affected woman went to the doctor and was admitted to a hospital in the Catalan capital. He said he was vaccinated but the health workers could not access any document that certified him and, because of his age, they suspected that he was not immunized. In addition, the woman had embarked on the cruise in the Roman port of Civitavecchia, in Italy, a country that is endemic to measles due to the high number of cases recorded.

According to the Generalitat, given the indications that it could be a case of measles, the hospital alerted the Emergency Service of Epidemiological Surveillance of Catalonia on the 30th. Measles is a notifiable disease and each suspected case must be reported to the National Epidemiological Surveillance Network to monitor the patient and their contacts and neutralize potential outbreaks. The Public Health Agency of Catalonia also notified the case to CCAES so that it could notify the External Health Service, the competent body in sanitary matters in ports and airports. The woman had been traveling in Europe since May 15.

Measles is a very contagious disease that is transmitted through microscopic drops of saliva that remain suspended in the air. The incubation period oscillates between four and 12 days and the clinical picture begins as a kind of cold, (red eyes, runny nose, etc.), with high fever and, after three days, a very characteristic skin rash. start behind the ears. Although mortality barely reaches 0.2% (especially in children), the virus can generate serious complications such as pneumonias, respiratory problems or serious neurological complications. There are vaccines.

The Ministry of Health gave notice to the company operating the cruise to alert all passengers who disembarked in Barcelona. The company sent an email to the 2,525 passengers of 56 nationalities who got off the boat in Barcelona to check their vaccination status and, in case of not being vaccinated, to visit their doctor to monitor their health. The message asked the passengers to be alert in case they developed any symptoms in the following three weeks. The Ministry also issued the notice to all the countries involved and to the cruise authorities, which continued its trip to Gibraltar with about 900 people on board. According to Health, no new cases have been reported in Spain and there are no references that new infections have occurred in the warned countries.

The warning comes just a couple of months after the quarantine was decreed in a cruise organized by the Church of Scientology in Caribbean waters. The spiritual retreat ended with 300 people being held for several days after a case of measles was detected. "In that case, more measures were taken because vaccination coverage in those areas is lower, if a case of measles arrives in Barcelona there is no risk to public health because the rates are very high," says Dr. Toni Trilla, chief of Epidemiology of the Hospital Clínic de Barcelona.

With this New Zealand passenger, there are already 219 cases detected in Spain so far this year until July 9, according to the latest newsletter of the National Network of Epidemiological Surveillance. It is 77% more than last year at this time. "It is not worrisome, but it deserves an analysis: are they imported or native cases? The population was vaccinated? The cases here are imported and there has not been a sustained transmission over time, if we finish the year with 50% more cases It will be news, yes, but I do not think we will shoot as in other countries, "adds Trilla. Since last year, Spain has the certificate of the World Health Organization for the elimination of measles, which means that the virus does not circulate through the territory, there is no endemic infection in the country and that all cases detected are associated with imported cases.

In Spain, the routine immunization schedule includes immunization free in two doses (at 12 months and three years) in the MMR vaccine (against mumps, measles and rubella). In addition, the health authorities recommend vaccination for adults born after 1966, who have not been vaccinated and who do not have proof of having suffered the disease. With the group born before 1966, the toilets they consider that they have already passed the disease at some time because, since then, they have lived several epidemic outbreaks and, therefore, are protected against infection.

"The vaccine is effective in 97% of the cases, that small proportion that does not respond is accumulating and therefore, in countries where measles has been eliminated or there are very high coverage rates, as in Spain or New Zealand, the age of the cases has been rising and it is beginning to be an adult disease, or it affects adults from the age of 40, or very young children, aged six and eight months, who have already lost the protection of the maternal antibodies and they are not vaccinated because they are not old, "he says. Núria Torner, of the sub-directorate of Surveillance and Response to Emergencies of Public Health of the Generalitat. The largest outbreaks this year have been reported in Madrid and Guadalajara, where several infectious episodes affected some 40 people last May. In Catalonia, where a hundred cases have been registered in total, it was also recorded a couple of outbreaks with 19 infected, one of them related to a group of people who were not vaccinated.

Precisely, anti-vaccine people are putting the immunity of the group against measles in check in some developed countries. For example, in the American State of New York, where there has been a great outbreak among the ultra-Orthodox Jewish community due to their refusal to be immunized. But this movement has also moved to Europe. According to the European Center for Disease Control and Prevention, in Italy and France, for example, they have been detected in the last year-between May 2018 and April 2019-, 2,138 and 1,745 cases respectively. "Italy has had a few years where the MMR vaccine had very low coverage and now they are paying for it," explains Torner.