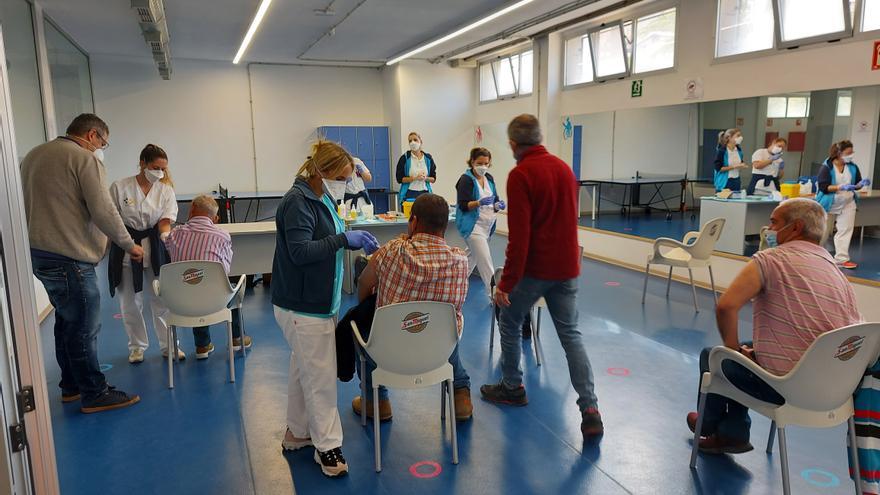 The Ministry of Health of the Government of the Canary Islands continues to advance in its vaccination plan and until yesterday, Wednesday, March 3, it had already administered 162,967 doses of the three vaccines available in the European Union at this time, which represents 74.18 per percent of the total 219,680 doses received to date.

In addition, the immunization of 55,729 people in the Canary Islands has already been achieved, having already received two doses of the vaccine, which represents 4.13 percent of the target population.

Advances in the vaccination schedule

With the remaining 56,713 doses and those that will arrive in the Canary Islands in the coming days, the vaccination teams in all the islands continue to advance in the campaign.

In the non-capital islands, due to their population characteristics, progress is made faster with the established calendar. Thus, groups 1 and 2 are already complete with the two doses and groups 3 and 4 are currently being vaccinated and, in parallel, group 5 and group 6. On the other hand, it is estimated that it can be started during the next week with the vaccination of teachers in special education centers.

In the capital islands, on the other hand, group 1 has already been completed and in group 2 the second doses are being finished. In addition, the vaccination of the first dose of almost all the groups included in group 3 has begun, and those that remain pending will begin in the coming days.

In these islands, the Official Nursing Associations of both provinces are being vaccination points for health professionals such as speech therapists, podiatrists, physiotherapists, nutritionists and occupational therapists.

The Ministry highlights that the rejection of vaccination is practically non-existent in the Canary Islands and in a preliminary way we estimate between 0.5 and 1 percent in the current vaccination groups.

Group 2. Front-line personnel in the health and social health field.

Group 3A. Hospital and PC personnel not considered in group 2.

Dentistry, dental hygiene and other staff.

Group 3B. Public Health services staff-management and response to the pandemic.

Group 6. Collectives with an essential function for society.

Group 7. People under the age of 60 with severe high-risk COVID-19 conditions.

The Department of Education, led by the mayor Juan Francisco Artiles, reports that, this Thursday, the first dose of the vaccine against Covid-19 has been applied to users and workers of the Telde Occupational Center.

Specifically, 74 people were inoculated. Those over 55 were given the Pfizer vaccine and the rest were given doses from the pharmaceutical companies AstraZeneca and Pfizer. In the procedure, carried out by the Canary Islands Health Service, the team of workers from the center collaborated, as well as the Department itself, providing logistical assistance.

Vaccination in the occupational center

Thus, to carry out the action, the Department of Education, on whom this center depends, chose the Juan Carlos Hernández sports hall, located in Jinámar. The good coordination of the troops made it possible that only an hour and a half were used to apply all the vaccines.

The Councilor for Education, Juan Francisco Artiles, thanks users, workers, family members and the Canary Islands Health Service “for their willingness to ensure that vaccination occurs with all guarantees of success.”